In October 2013, the Canadian Institute of Health Information (CIHI) released a very thorough and comprehensive report entitled: Treatment of Preventable Dental Cavities in Preschoolers: A focus on day surgery under general anaesthesia. The report states that every year in Canada there is approximately 19,000 day-surgeries to treat early childhood caries (ECC) in children under the age of six. This data was averaged from 2010 to 2012, and does not include Quebec, the only province that chose not to participate in the study. The report states that on average in Canada, a little more than one in 100 children between the ages of one and five years-old have treatment for ECC in hospitals, and 99 percent of these are treated under general anaesthesia (GA). This makes dental surgery the most common surgical procedure requiring anaesthesia in childhood. In fact, dental surgery comprises nearly one-third of all children’s day-surgeries in hospitals. This is an underestimation of the true number of childhood dental anaesthetics, since the authors were only able to measure the frequency of general anaesthetics for children performed in-hospital. There are undoubtedly thousands more cases per year of general anaesthetics for preschoolers that take place in community dental clinics each year. The report was also unable to capture the children who were on waitlists for upcoming dental surgery. The second most common day surgery in this age range was myringotomy (eardrum surgery) with tubes with an overall rate of 19 percent. Tonsillectomy and/or adenoidectomy made up the third most common day surgery in preschoolers, comprising 11 percent of all general anaesthetics. Dental surgery, therefore, is much more common than one might expect, encompassing 31 percent of all day-surgeries for preschoolers.1

The strength of this report is that the investigators did not just report the numbers as the final conclusion, but went on to describe characteristics of the population most at risk as well as factors that impeded access to general anaesthesia and dental care. The authors found that children from the least affluent areas had rates 3.9 times as high as compared with those from the most affluent areas. Children that lived in a rural town were 3.1 times as likely to have ECC requiring general anaesthesia compared with those from urban centers. And most strikingly, children from neighbourhoods with high Aboriginal populations had rates of 8.6 times higher than those with low Aboriginal populations. The authors also analyzed the distance families needed to travel to reach a hospital facility. Thirty-four percent of the children were estimated to have come from at least an hour’s drive away, and approximately two-thirds of those came from more than two hours away.1 It is interesting to note that in the CIHI report, Ontario had the lowest rates of paediatric dental general anaesthesia in hospitals. From the numbers it might seem that Ontario has the lowest need for dental general anaesthesia amongst preschoolers. However, this is likely not true, and the large number of cases treated in office-based settings in that province could give a false impression of the true burden of need. This is currently only a hypothesis, and a research project at the University of Toronto is underway to test this theory. However, it is logical that in Ontario, the only province to recognize dental anaesthesia as a specialty, there would be a large volume of cases treated outside of the hospital. This model has proven very safe and effective at treating healthy children in office-based settings, allowing medically complex children to be seen in a hospital setting.2 It might serve as a model for treatment outside of the public hospital system that operates on limited resources. A 2013 report from British Columbia that studied dental GA in children less than four years of age acknowledges the merit of utilizing outpatient facilities for paediatric dental GA. The authors state that their data suggests “healthcare costs and general anaesthesia wait times could potentially be reduced if these children received dental care under general anaesthesia in alternative, less costly facilities.”3

The rise in the need and demand for general anaesthesia to treat children is not just increasing in Canada. A 2006 study from Australia studied the trends in paediatric dental anaesthesia from 1993-2004, and concluded that use of GA was increasing. The authors discovered that the use of GA during the time period of their observation had increased three-fold. Preschool children (aged zero to four), males, Indigenous children, and those from rural or remote areas were most likely to require a dental general anaesthetic.4 Another study in Western Australia published in 2010 also concluded that paediatric rates of dental general anaesthesia were on the rise, and yet interestingly found no link between socioeconomic status and need for a general anaesthetic. In the US, it appears the rates of caries are increasing in preschool children. A 2007 report from the US Center for Disease Control concluded that while caries rates were generally declining, caries rates in children in the two-to-five year-old range were increasing.5

The use of general anaesthesia is likely not only growing as a function of increasing incidence of ECC. Parental preferences seem to be changing as well in favour of anaesthesia as a treatment modality. In 2005 Eaton et al. summarized these changing attitudes in an article published in Pediatric Dentistry. The authors showed 55 parents videotapes of eight different behaviour management techniques. A visual analog scale was used to rank parents’ reactions and a survey was utilized to assess parents’ opinions on treatment acceptability. In order of parental preference, the results of the study found tell-show-do as most acceptable treatment modality, followed by nitrous oxide sedation, and then general anaesthesia. Active restraint, oral sedation, voice control, and passive restraint followed in that order. Hand-over-mouth was deemed unacceptable.6 Critically appraising the study, it must be noted that general anaesthesia, active restraint, voice control and oral sedation were ranked very closely to one another. Nonetheless, this study demonstrates a shift in parental preferences towards general anaesthesia compared to previous research from 1984 and 1991.6 The authors suggest multiple hypotheses for increased acceptance of GA; from better familiarity and acceptance with outpatient anaesthesia, to changing parenting styles.6

There are multiple ways that the profession of dentistry can respond to these data. The primary focus should remain focused on education and prevention. Continuing to promote water fluoridation, education for new and expectant mothers, school and community programs, and supporting primary care dentists with educational materials remain top priorities. In fact, the data from the CIHI report emphasizes high-risk groups that require aggressive preventative strategies. However, while prevention can minimize new cases, there are thousands of children on waiting lists for a dental GA, and tens of thousands at risk for developing ECC. A 2007 Wait Times Guarantee pilot project identified paediatric dental surgery requiring general anaesthesia as one of six priority surgeries for children in Canada. However, wait times in hospitals continue to remain long. A study published in 2010 reported wait times of up to 40-60 weeks for paediatric dental treatment requiring GA.7 Anecdotally, other regions have wait times exceeding 14-18 months.8 The Canadian Paediatric Association has taken notice of the prevalence of ECC, need for GA and increasing wait times for paediatric dental surgery. In a 2013 report they state that based on data from 15 Canadian paediatric academic health centres, paediatric dental surgery wait times earned a grade of D, the lowest possible s
core. This reflected the “fact that only 50 percent to 59 percent of patients were treated within a medically acceptable wait-time benchmark.”9 Increased demand is likely not the only problem contributing to an escalation in wait times. Evidence in Ontario suggests that dentists are losing their ability admit and treat patients in hospitals. The authors of a 2000 study conducted in Ontario found that cutbacks and restructuring in hospitals had resulted in the closure of 18 hospital dental departments and clinics, loss of operating room time for other dentists, and increased wait times.10 Fifty-three percent of dentists with hospital privileges who responded reported that they had insufficient hospital time to treat the needs of their patients.10 By 2008, another three hospital dental departments in Toronto alone had closed. This resulted in the total number of one-year residency positions at the University of Toronto being reduced from 32 to 13.11

In short, the profession of dentistry in Canada needs to react to the increasing need and demand for general anaesthesia for paediatric dental surgery. Hospital operating room time is becoming a precious commodity, and perhaps the resources of a hospital need to be reserved for complex patients. Outpatient facilities represent a cost-effective and safe treatment option for appropriate cases when care is delivered by an experienced anaesthesia provider. Hopefully the recent literature illuminating the need for challenges in obtaining a paediatric dental GA will create conversation between dental organizations on a provincial and national level. Some provinces have clear regulations regarding training and treatment abilities of dental anaesthesia providers, and others do not. Some provinces promote anaesthesia delivered by well-trained dentists, and others oppose or restrict anaesthesia by dentist providers. Regardless of one’s personal opinions on dental anaesthesia as a specialty, it is clear that the issue of paediatric dental anaesthesia is not going away, and it is unlikely that government alone will provide the solution. One might argue that this is a dental problem that should have a dental solution. Hopefully dentists and dental groups in Canada can open up a dialogue and propose evidence-based practical solutions to improve access to paediatric dental general anaesthesia. However, until a solution is reached, over 20,000 children are waiting for an appointment to treat their severely decayed ­dentition. OH

Dr. Adams is a second-year resident in the Dental Anaesthesia program at the University of Toronto, Faculty of Dentistry.

1. Canadian Institute for Health Information. Treatment of Preventable Dental Cavities in Preschoolers: A Focus on Day Surgery Under General Anesthesia.; 2013:1–46. 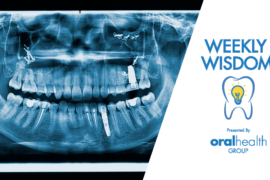 Weekly Wisdom: Implementation and Integration of Implant Dentistry into Your Practice