Introduction
The use of video in dentistry is increasing steadily in private and academic education, as well in regular practices. As the technology becomes more affordable and easier to use, video is becoming a common tool for communication, documentation and education. Video provides many advantages including live-stream demonstration, the creation of case studies for students, as well as the post-evaluation of work performed by students. For private practices, the use of video can have multiple advantages, such as documenting work, patient education, communication with technicians, and protection against malpractice suits.

There are several options for deploying video technology cameras: ceiling mounted, hand-held, mobile phone, and headband/loupes mounted. While the first three options are viable, they pose some practical challenges: ceiling mounted cameras are difficult to aim and the dentist and assistant’s hands and bodies often obstruct the view of the patients’ mouth. The combined movement of the videographer’s hands and the patient’s mouth make the movie unfocused and jumpy. Mobile phones pose multiple problems, such as hygiene and privacy. Sharing patient images taken with personal mobile devices is very problematic and strongly discouraged in many countries. Alternatively, the use of head-mounted cameras (headband or loupes) provides the advantage of showing the dentist’s own perspective and allows uninterrupted imaging, while freeing up hands for clinical work. There is also a significant cost advantage over the ceiling mounted cameras.

Development of Video Dentistry
The fast pace of a dental practice offers few opportunities for effective practitioner communication with colleagues and mentors to discuss treatment options and to receive support. There are similar challenges when trying to help patients understand complex treatment recommendations without visual substantiation or reference.

I faced these problems after graduating and subsequently specializing in prosthodontics. I needed to present my patients with a variety of treatment options varying in cost and durability. Helping my patients to understand the options and to trust my recommendations was very important. Furthermore, once the procedure was complete, it was essential to find a better way to educate patients to become adept at conducting appropriate post-treatment care at home.

I came to the conclusion that video could provide the solution to most communication needs. In 2006, however, there were no viable solutions for integrating video into routine clinical use in dentistry. The first obstacle was that the mouth is rather small; recording inside the oral cavity is difficult, due to the small filming radius and lack of ambient light. Secondly, recorded video required much processing of large files. There was also a concern in conforming to the strict information security regulations surrounding patient data.

The Technical University of Helsinki (Aalto) and the Dental Department of the Helsinki University supported a development project led by myself, along with broadcast engineer Lars Kåhre, and industrial designer Niko Rusanen, to develop a functional solution for utilizing video in dentistry to enhance communication. The team created Futudent, a small, lightweight camera that has a robust, simple recording software, and an integrated secure cloud sharing capability.

The dental camera was designed to be mounted on loupes, fixed to a headband, or attached to static objects in the operatory such as the light pole. The camera can be switched between the above without the need for tools. In addition to capturing video and still images, the Futudent camera allows communication (including voice and text) and is operated hands-free – permitting the practitioner to focus fully on the patient. Originally released in 2012, it has been continuously evolving through user feedback. Futudent is currently in use globally in more than 50 countries, including Canada.

Video Dentistry in Education
The first Futudent head-mounted cameras were adopted for use at the University of Birmingham’s College of Medical and Dental Sciences for clinical testing with undergraduate students. The students were exposed to teaching sessions carried out in both simulated clinical teaching environments and during supervision of patient treatment. Thirty-six students reported that teaching with the aid of the loupe-mounted camera enhanced their ability to see what the tutor was looking at, and allowed instructions/guidance to be communicated more effectively during treatment on patients. The results were presented at the ADEE 2013 Conference in Birmingham.1

These results corresponded with my own experiences with loupe-mounted cameras during my specialization in prosthetics. Using recordings of my work taken from my own perspective, I was able to receive detailed feedback from my mentors that would not have been possible from a chair-side observer, or someone who conducted a post-procedural assessment. My mentors were able to follow me both live on a big screen or, when not physically present, comment on my recorded works that were easily shared through the cloud platform. One example was the treatment of a patient with severe pemphigoid disease. Because of the susceptible mucosa of the patient, treatment was slow and deliberate. I had selected a retraction cord that was too thick for this particular gingival biotype; this was promptly noted and commented on by the mentor, observing the procedure on a large screen. Remote screen observation is also less invasive, as the treating dentist can proceed without a mentor “breathing down his or her neck”.2

Further Research
The Institute of Dentistry, University of Helsinki, in cooperation with the Department of Conservative Dentistry, Semmelweis University, Budapest, Hungary followed up the Birmingham research with a project to investigate whether the use of a loupe-mounted video camera enhanced the learning and performance of undergraduate dental students in fixed prosthodontics.

During the investigation, two groups of five students were randomly chosen from among the fourth-year dental students. The task chosen for this study was the preparation of a porcelain-fused-to-metal crown on tooth 16 using Frasaco models in the phantom lab. Only the members of the test group recorded their performance with the loupe-mounted video camera. The instructor assessed the test students’ performance by analyzing their individual video recordings (Figs. 1 A-B). The students had access to their own recording afterwards. The performance of the students in the control group was assessed conventionally, by giving verbal feedback based on the finished preparation. The process was repeated two weeks later, at which time both groups had access to cameras. For assessment of the preparations, each tooth preparation was scanned with a digital scanner and the data analyzed using E4D Compare software to compare it to an ideal known preparation (Figs. 2 A, B, C). Every preparation was screened for shoulder width, occlusal convergence, axial wall height and undercuts with respect to similarity to the ideal preparation 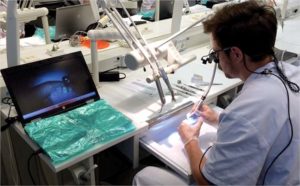 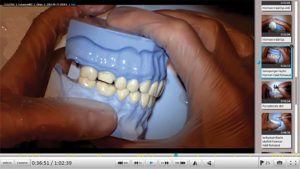 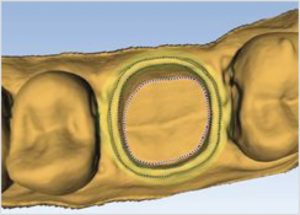 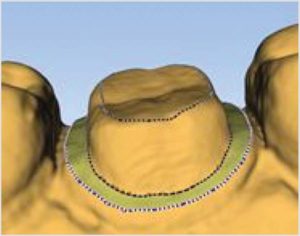 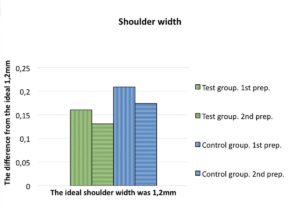 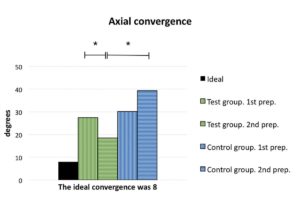 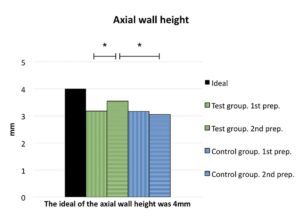 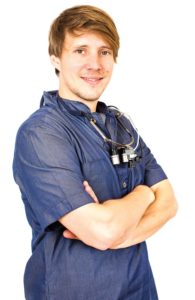 The conclusion of this study was that the use of a head-mounted video camera helped students to learn tooth preparation for fixed prosthetics restorations more efficiently. Not only did the feedback from their mentors help them improve their results in the second round of practice, it also promoted self-assessment as the students could reflect on their work in their own time.3
A video of how the trial proceeded can be found here: http://www.futudent.com/en/video- dentistry/professional-education

Future Directions
Video dentistry is gaining wider adoption across North America, Europe, the Middle East and Asia. Utilization ranges from traditional big-screen viewing to personalized student support, using student-made videos for evaluation and feedback. Further research into the effectiveness of video in teaching for patients as well as students is currently under way.4 It is clear that video recording is making a significant entry into daily dentistry, creating many opportunities and benefits for dentists, teachers, students and patients. OH

Dr. Rusanen wishes to acknowledge the support of Brian Forth and Hans Garritzen in the writing of this article. 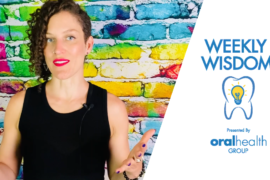