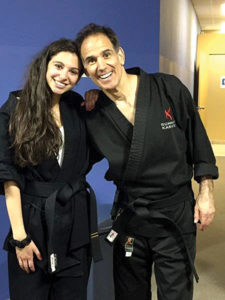 “If you look you up the word experience in the dictionary, it says see mistakes” and at 60 years old you, feel that you have mastered a lot over the years. Consequently, at this stage in life most of us will succeed because of the “experience” we will have gone through. As a dentist I have far exceeded the 10,000 hour rule and after 33 years in practice, I feel quite comfortable in tackling most challenges that come my way. However to bring a better sense of balance to my life and profession I set out to achieve a core set of three goals or better known as a “bucket list” that I want to accomplish during my time.

These goals are over and above the day to day values that most of us strive to perform. That being a good spouse, father, and employer, making smart choices and being recognised for some one who possesses honesty and integrity. To accomplish these goals involves hard work, determination and grit. For me the goals/accomplishments that I have set for myself are:

The second goal was one that was delayed and contemplated for many years and with hindsight it was the day to day events of watching my daughter, Hunter persevere for 10 years (sometimes with a little prodding from her parents) that was the catalyst I needed to begin my journey. The time was right, I knew I would make the effort and I had a 13-year-old Sensei (In Japanese meaning “one who has walked the path” and is used to refer to the teacher) to be my inspiration.

At the beginning it was a little intimidating wearing a stark white Gei (karate uniform) that screamed to the world – I don’t have a clue what I’m doing and I’m the most dangerous person in the Dojo (karate gym). Yet just like in dental school, when I picked up a mirror, explorer and drill for the first time, I knew that all journeys begin with a first step. The intro class and being presented with my white belt was my way of knowing there was no turning back and that this was something I wanted for myself. I remember the excitement when I received my first stripe – I thought that there must have been a mistake and I couldn’t wait to tell Hunter. After three to four months, I received my yellow belt and quickly thought “in for a penny, in for a pound”. As such, I was determined to learn and stepped up my participation to four times per week, believing that “repetition is the mother of success”. As the stripes and belts progressed, I developed friendships with many different people who readily shared their knowledge and guidance. But what impressed me the most and to this day, was the patience that the Sensei’s had with me. As a mature participant it was not always easy or quick to grasp the kutas (a series of self defence movements for each belt). There was always help and understanding to insure that I did not fall behind. It was not always easy to push myself – especially during the dark cold nights in January and February or after a particularly long day at work. But having someone in the house that was doing the same thing made it a little more fun and inspiring.

As I was progressing through my brown advanced belt and the possibility of grading for Shodan (1st degree black belt) with my daughter grading for Nedan (2nd degree black belt), I was determined to make it happen and stepped it up to the max. I was prepared for grading day and made it through. Grading with many of the friends that I had made along the way and mutually encouraged was a remarkable event. Being presented with my black belt by Hunter was a momentary pinnacle of a determined, disciplined journey that was guided by so many. I reflected back at how far I had come in the martial arts and realized that in life I had also progressed personally and professionally. It was not long after I began attending the black belt classes that I realized the journey begins again but this time with a greater depth of knowledge. As for the last goal on my bucket list – it involves a piano and like karate, a tremendous amount of practice. OH

Dr. Jordan Soll is a Toronto based general practioner with special interest in appearance related procedures. He is principal of Aesthetics in Dentistry, Co chairman of the editorial board of Oral Health Journal, and the dental expert for City Line with Tracy Moore.

3 Factors to Consider When Buying a Practice