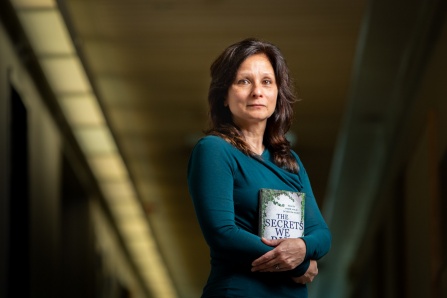 University at Buffalo professor Mary Bush, a forensic dentist who has helped analyze prominent criminal investigations, is returning to the world of crime fiction. Her new novel, “The Secrets We Bury,” the sequel to her acclaimed first book “A Simple Lie,” published Wednesday, June 2.

The Buffalo-based crime series follows dentist-turned-death-scene-investigator Valentina Knight, who must unravel the mystery behind the shocking murder-suicide of a mother and child where nothing is as it seems. As Knight sets out to discover the truth, she soon learns that family secrets do not stay hidden for long.

The novel, published by Bloodhound Books, is available in paperback on Amazon and Barnes & Noble, and as an e-book on Kindle. Early reviews have rated the book at 5 out of 5 stars.

Bush, DDS, is an associate dean for student, community and professional initiatives and associate professor of restorative dentistry in the UB School of Dental Medicine.

The second book in the Valentina Knight trilogy, “The Secrets We Bury” builds on Knight’s story, as she is now stronger as a result of her experiences in the first novel, says Bush. However, the sequel is a standalone entry, and reading the previous novel is not required, she says.

“A Simple Lie” introduces Knight, who after being maimed in an attack, desperately lied to land a job as a death scene investigator. The lie, however, placed her in the crosshairs of a serial killer and forced Knight to race against time to capture the killer before she became the next victim.

Bush’s debut novel earned a gold medal in the best mystery/thriller e-book category in the 2021 Independent Publisher Book Awards, a bronze medal for crime fiction in the 2020 Reader’s Favorite International Book Awards, and was a finalist in the thriller category of the 2020 Next Generation Indie Awards.

“It was a great honor to be recognized. Getting the email saying that you’re a winner or a finalist is an exhilarating moment. When I got the email, I was in the middle of a meeting and had to stop and tell everyone,” said Bush, who is also building notoriety among fans. “Having people that I don’t know send me messages to tell me how much they like the book has been wonderful.”

Along with the praise came feedback, which Bush welcomed while writing her second novel.

“The fans are as devoted to the characters as I am,” said Bush. “I like to engage with the readers and listen to their comments – positive or negative – because it’s only going to make the book stronger.”

No stranger to bizarre cases

Along with her husband and UB colleague, Peter Bush, Mary has helped identify murder victims by analyzing their dental work. They are also instrumental in raising awareness of bite mark analysis as flawed evidence, and were among the first researchers to question the validity of the science.

They were cited or testified in court cases across the country, including the prominent trials of Douglas Prade and Eddie Lee Howard. In 2014, Mary Bush presented their research on bite mark analysis during a congressional hearing on forensic science. They also helped identify several of the victims in the 2009 crash of Colgan Air Flight 3407 in Clarence, New York.

Bush says she was initially reluctant to base her books on her own experiences, but her storybook career presented the perfect foundation for a crime novel.

About The University at Buffalo