Dr. Sabates received his dental degree and certificate of advanced education in general dentistry from the University of Missouri-Kansas School of Dentistry. In addition to the ADA, FDA and the SFDDA, he is a member of the Academy of General Dentistry, Hispanic Dental Association. He is a fellow of the American College of Dentists, International College of Dentists, and Pierre Fauchard Academy.

During his presidency, Dr. Sabates will prioritize inclusivity and increasing diversity within the pipeline of councils and committees, while emphasizing the value of membership to dentists. Looking at the business model of the ADA and ensuring that membership is providing what members truly need will be an ongoing effort throughout the next year. Diversity of thought is something Dr. Sabates has valued throughout his career and will continue to emphasize during his presidency. With decades of experience working with dentists from all over the country, Dr. Sabates brings insight and vision that will help make strides towards these goals during his time as president.

“The opportunity to serve as president of the ADA is a milestone I don’t take lightly,” says Dr. Sabates. “Getting to follow in the footsteps of the many who have come before me is a huge honor and I look forward to continuing the work that has such a strong impact in the field of dentistry.”

Among other recognitions, he is the 2021 recipient of the FDA’s J. Leon Schwartz Lifetime Achievement Award, and he was named the University of Missouri-Kansas City School of Dentistry Alumnus of the Year in 2016.

Dr. Sabates is the founding president of the Dental Lifeline Network-Florida, serving as president from 2011 to April 2020.

About the American Dental Association

The not-for-profit ADA is the nation’s largest dental association, representing more than 162,000 dentist members. The premier source of oral health information, the ADA has advocated for the public’s health and promoted the art and science of dentistry since 1859. The ADA’s state-of- the-art research facilities develop and test dental products and materials that have advanced the practice of dentistry and made the patient experience more positive. The ADA Seal of Acceptance long has been a valuable and respected guide to consumer dental care products. The monthly The Journal of the American Dental Association (JADA) is the ADA’s flagship publication and the best-read scientific journal in dentistry. For more information about the ADA, visit ADA.org. For more information on oral health, including prevention, care and treatment of dental disease, visit the ADA’s consumer website MouthHealthy.org. 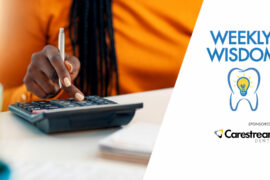