Several days after attending the Pacific Dental Conference at the Vancouver Convention Centre, dentist Dr. Nick Seddon started to feel unwell, and soon after, he heard reports of a COVID-19 case from the same event. An avid runner planning on qualifying for the Boston Marathon and a former professional soccer player with the Vancouver Eighty-Sixers, Seddon is pretty tuned in to his body’s signals. He complained to his wife, Elly, of body aches, which seemed to come out of nowhere, chills and a dry cough. Seddon went to an urgent care clinic in Vancouver and got tested immediately upon hearing about the confirmed case at the conference, and five days later he learned that he had tested positive for COVID-19.

Seddon called the patients he had seen since attending the conference and, based on the Centre for Disease Control guidelines, advised them to self-isolate for the next 14 days. “Not an easy conversation, and some were more accepting than others,” Seddon says. “Fortunately, none of my patients were affected, which speaks to why dental practices are considered quite safe with the infection control measures we already have in place.”  Later, he learned 32 people who attended the conference were directly infected, and 81 people indirectly.

“Social distancing was an unknown at the time,” says Seddon. “And with some 15,000 conference attendees shaking hands, no one knew the impact that would have.”

If there was a silver lining for Seddon, it was that his symptoms were mild, and that he didn’t require hospitalization. He credits being healthy and active before COVID-19 and throughout his recovery as the reason for his well-being. “I was running a few times a week. Once quarantined, I was doing group exercises on Zoom with our friends, circuit training workouts with my wife, and hopping on my bike on my patio, which is hooked up to my trainer.”

When Seddon was in marathon training mode, he had hired a nutritionist. When hit with COVID-19, he worked with him again to ensure he was eating healthy. Maintaining a positive outlook, both physically and mentally, played a key role during his quarantine. 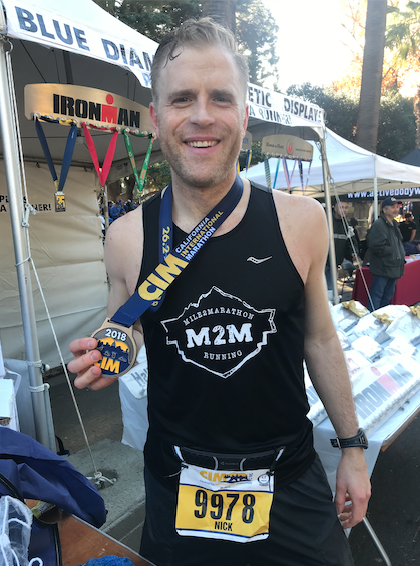 “I am so thankful for my aerobic base,” says Seddon. “Running has always been a huge part of my life. I think that’s why my symptoms were so mild. Once diagnosed with COVID-19, we practised healthy living — improving on our sleep patterns, updating my nutrition plan and exercising multiple times a day.”

This is not to say the diagnosis wasn’t a shock. “My wife started crying, because there was so much media and paranoia around it. It was also scary, especially since you hear all the stories from China and Italy of people dying, and then you learn you have it. Even making the decision to talk about it, you’re not sure how people will respond. But when I did start revealing my experience, people were so supportive. Even the patients I see on a day-to-day basis.”

In times like this, you have to come to terms with what type of person you’re going to be. Are you going to be the person who believes in all the conspiracy theories and be negative? Or will you be a leader and help guide people through this nightmare? Seddon chose the latter. “We both decided to volunteer to participate in the convalescent plasma study. We tested positive for the antibodies and are now waiting to hear whether or not we will be able to donate.”

With a personal best of 3:10 at the California International Marathon, Seddon has not given up on working toward the three-hour mark that so far has eluded him. Boston is in his sights, and running certainly helped pave his path to a healthier lifestyle. When his quarantine confinement was finally lifted, the first thing he did was go outside for a run along the seawall. “It was amazing but eerie,” he says. “The seawall is always packed with people, but on that day, I was alone.”

Time in quarantine helped put things into perspective. It was an opportunity for Seddon and his wife to appreciate the simpler things in life. “It’s crazy the things you take for granted,” he says. “Now, it’s about making every day count. It made me reflect on when I was at my peak, training eight times a week, which included strength training. I was less injury-prone, and I wasn’t tired. I was always moving. While quarantined, it was important for me to keep moving – to keep fit. My advice to runners is, don’t make the pandemic your excuse not to go out for a run. Go outside, take in the fresh air and let your body soak up those rays of sunshine.”

To view more COVID-19 news as it pertains to the dental profession, please click here.