The American Dental Association (ADA) today praised the Portland, Ore., City Council’s unanimous vote to begin fluoridating the city’s municipal water system before a self-imposed deadline of March 2014. The vote marks an end to Portland’s distinction as the largest U.S. city not providing its citizens the oral health benefits of optimally fluoridated water.

We applaud the Portland City Council’s decision to follow the solid science,” said ADA President William R. Calnon, D.D.S. “The evidence supporting water fluoridation is overwhelming. It is a safe, effective way to fight oral disease, particularly among people who do not receive regular dental care.”

The ADA and the Oregon Dental Association have long advocated for fluoridation in Portland, which has a water system that serves approximately 900,000 people.

This action by the Portland City Council follows closely on the heels of decisions by policymakers in Milwaukee and Phoenix to reject efforts to discontinue fluoridation.

“We’re delighted to see this trend in the nation’s cities,” said Dr. Calnon. “The ADA is committed to supporting efforts to maintain and extend optimal community water fluoridation to as many Americans as possible.”

Dentistry has succeeded in preventing disease more than any other area of health care. Water fluoridation is one of the nation’s most potent weapons in disease prevention, and the ADA wants as many people as possible to enjoy the health benefits of this simple, safe, inexpensive and proven public health measure.

Studies prove water fluoridation is effective in reducing tooth decay by 20 to 40 percent. The average cost for a community to fluoridate its water is estimated to range from approximately 50 cents a year per person in large communities to approximately $3 a year per person in small communities. For most cities, every dollar invested in water fluoridation saves $38 in dental treatment costs.

The ADA urges people who live in non-fluoridated communities to push their local governments to adopt this proven public health measure. People who currently do not have access to fluoridated water should talk to their dentists about other ways to enjoy the health benefits of fluoride, such as supplements or topical applications.

Information on fluoridation and fluoride is available on the ADA’s fluoridation web pages on ADA.org and on its consumer website MouthHealthy.org. 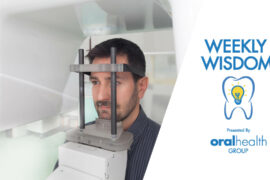 Weekly Wisdom: Indications for the Use of CBCT in Implant Dentistry