Several small studies have suggested a link between cumulative dental X-ray exposures and meningiomas, but the findings were inconclusive. In the newly published study — the largest ever to examine the question — by the Yale School of Public Health has found. The study is published online in Cancer, a journal of the American Cancer Society.

It was found that people who reported having “bitewing” X-rays at least yearly were found to have a 40% to 90% greater risk of meningioma.

Most likely this was related to people who received frequent dental X-rays in the past, before decreasing dosages, they had higher risk of developing a meningioma, the most common type of non-cancerous brain tumor, a new study led Meningioma is listed as a rare disease by the National Institutes of Health.

The estimated incidence is up to 8 out of 100,000 people, and it occurs more frequently among women than men. Although it is the most frequently diagnosed type of brain tumor, meningioma is listed as a rare disease by the National Institutes of Health. Tumors develop in a membrane that envelops the brain and the central nervous system known as the meninges. They can grow undetected for years and eventually reach the size of a baseball or larger. While they are not cancerous, they can cause debilitating side effects such as headaches, vision problems, and loss of speech and motor control.

The study found that over a lifetime, individuals who developed meningioma were more than twice as likely as those in the control group to report having received bitewing exams (which use X-ray film held in place by a tab between the teeth) on a yearly or more frequent basis.

While today’s patients are exposed to lower X-ray doses than in the past, the American Dental Association stresses the need for dentists to examine the risks and benefits of dental X-rays and has confirmed that there is little evidence to support the use of dental X-rays of all teeth in patients who are not experiencing symptoms.

“The study highlights the need for increasing awareness regarding the optimal use of dental X-rays, which unlike many risk factors, is modifiable,” said lead author Elizabeth Claus, a professor at Yale and a neurosurgeon at Brigham and Women’s Hospital in Boston.

The American Dental Association’s guidelines for healthy persons mentioned that children can receive one X-ray every one to two years; teenagers every one and a half to three years, and adults every two to three years, Claus said.

“These findings should not prevent anyone from going to the dentist,” says lead researcher and neurosurgeon Elizabeth B. Claus, MD, PhD, of Yale University School of Medicine and Boston’s Brigham and Women’s Hospital. “But it appears that a large percentage of patients receive annual X-rays instead of every two to three years, which is the recommendation for healthy adults.” 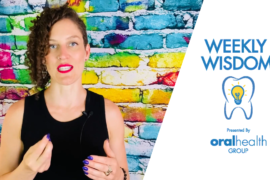