Two outstanding University at Buffalo innovators in dental medicine have recently been honored by national organizations for their contributions to dental education.

Eisner is described by Bruce Graham, dean of the University of Chicago’s College of Dental Medicine, as “the only colleague who had a truly transformative impact on dental education. He has had a remarkable career filled with innovative and progressive thinking.”

The impact Eisner had was on the development of information management systems that have been used in admissions and course/student evaluations in dental education.

Eisner started his career as a professor of community dentistry, but began taking on administrative roles, especially in information technology, first at Dalhousie University in Canada, and then, starting in 1989, at UB.

In a 2009 interview, Eisner recalled that when he was associate dean for information resources in 1993, Louis Goldberg, the UB dental school’s former dean, asked him to develop a program that would streamline the school’s admissions process.

“I told him we could write a program just for UB and I could do it in about six months,” remembered Eisner, who was also chairing an information technology advisory committee for the American Dental Education Association. “But I knew that other schools were also facing the same challenge, so I asked the dean if he would mind if, instead, we wrote an industrial-strength version that we could then sell to other schools.”

In 1995, the company sold three copies of AdMIT through a non-profit organization that was run through the UB Foundation; the following year, it sold six.

After that, Eisner said, “sales went through the roof.”

In 2009, there were “more than 200 admissions software customers, not just at dental schools but in other health professions schools,” he said.

The ACFD Distinguished Service Award is not conferred annually, but only when a member has made a contribution of sweeping significance to the field of dentistry.

Eisner has also been honored with the 2009 UB Faculty Entrepreneur Award and recognized in 2002 by the State University of New York as being an outstanding inventor at UB in the “entrepreneur” category.

Triftshauser, an orthodontist and 1961 UB dental school alumnus, was nominated for his award by Richard F. Andolina, a UB dental student set to graduate in 2013 and current president of the ASDA.

Andolina describes Triftshauser as “a life-long friend and mentor, a game changer in dentistry.”

At UB’s School of Dental Medicine, Triftshauser was responsible for involving the American College of Dentists (ACD) in implementing a course on ethics that is now part of the freshman introductory curriculum. On Ethics Day, as it is now known, he and his colleagues from the New York State Dental Association (NYSDA) and the ACD take a day to interact with the freshman class and lecture on dentistry’s core ethical values.

A Batavia resident, Triftshauser and his colleagues return to Buffalo to address all dental school classes in an evening lecture and open forum to discuss the tripartite system of organized dentistry and the importance of membership in the American Dental Association (ADA), the American Dental Political Action Committee (ADPAC) and state PACs.

Triftshauser’s relationship with the ASDA began when he was vice chair of the ADA’s Council on Government Affairs in the early 1990s. He later served as a member of ADPAC, which he chaired from 2009-11, and was able to interact with students on a national level.

In addition to mentoring dental students and participating in dental organizations, Triftshauser has served in his own community as a member of the board of education, a county legislator and an advisor to former New York State Gov. George Pataki.

Triftshauser says, “It is an individual decision as to how involved anyone will be. It’s more challenging now than ever to find time and if you do not have time to be involved, stay educated on the issues and always advocate membership.”

ASDA Executive Director Nancy Honeycutt says Triftshauser’s “passion for the profession is contagious and he commands respect. He continues to be a role model for all of us.” 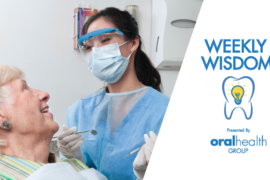