When a new X-ray unit becomes a bestseller only shortly after its market launch, it means customers have been impressed by its special qualities. With the ORTHOPHOS SL, this success is due in part to the innovative imaging technology that ensures highest quality images. The unit can also be upgraded with 3D functions to cover a large range of indications.

Bensheim/Salzburg., When the ORTHOPHOS SL X-ray system was put on the market at the IDS in March 2015, Jörg Haist, Head of Product Management for Imaging Systems, had ambitious goals: “We want to offer the best X-ray solution on the market which is capable of impressing even the most demanding dentists all around the world.” Just eight months after deliveries began, the 1000th unit left the production site in Bensheim on December 16, 2015. Mr. Haist believes the high image quality is the main reason for this success. “The image quality of the ORTHOPHOS SL was optimized in many ways. Equipped with Sharp Layer Technology and a Direct Conversion Sensor, this system allows extremely high-resolution images to be made with the lowest possible exposure to radiation.”

Users value its versatility and precision
Sirona does not assess the success of a dental device solely on the basis of sales figures. Feedback from numerous users and testers is just as important. For example, Dr. Guido Pawlik in Berlin, who uses the ORTHOPHOS SL in his practice for endodontics, periodontology, functional diagnostics, orthodontics and respiratory dentistry says, “With the ORTHOPHOS SL we can use a single device for all our specialties to detect highly complex relationships easily – at one glance and at a single location.” Dr. Matthias Münch from Viernheim, Germany, considers ORTHOPHOS SL to be a sustainable technology that gives him optimal support for implant, prosthetic, and orthodontic treatments. “With high-resolution, exceptional image quality, various volume sizes, and the option of changing the focal plane in postprocessing, the ORTHOPHOS SL is again one step ahead.”

Quality and teamwork “made in Germany”
Due to high quality standards and the elaborate production process, producing 1,000 ORTHOPHOS SL units in such a short time frame was also a challenge for the production employees at Sirona. “The production power and passion of all involved went into this,” says Uwe Kaldowski, Head of Imaging Systems Production. This highlights Sirona’s unique capacity, not only in terms of research and development, but in production as well, which is unparalleled in the dental sector. 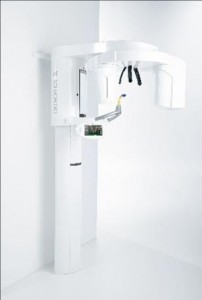 Optimal evaluation of image data
Sharp Layer is the technology that gave the ORTHOPHOS SL its name. This technology can generate a single panoramic image using several thousand individual projections, which are taken very rapidly from several angles in one rotation, and reproduce the individual morphological situation very sharply. The advantages are the resulting excellent panoramic images and the possibility of subsequently compensating for positioning errors. The Direct Conversion Sensor (DCS) also ensures best image quality. It generates electrical signals directly from X-rays without the previously required intermediate step of converting them into light. As such, signal loss is minimized and the image data yielded is significantly better in relation to the exposure to radiation. Thus the Direct Conversion Sensor generates extremely sharp X-ray images very efficiently with a lower radiation dose.

The ORTHOPHOS SL X-ray system, presented at the IDS 2015, is based on the same platform as the proven ORTHOPHOS XG. It is available as an upgradable 2D unit or as a 3D hybrid unit with a large volume (11×10 cm) or a volume of 8×8 cm optimized for a general dental practice. The ORTHOPHOS SL not only sets high standards for technology, but also for design: Last year it won the
prestigious Red Dot Design Award.