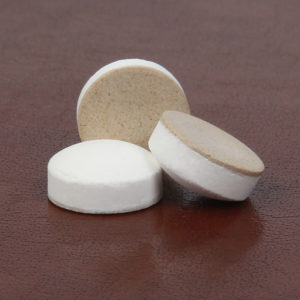 Researchers at the University of California, Irvine analyzed the effects of OraCoat® XyliMelts® oral adhering discs on people affected by clinically diagnosed dry mouth. The double-blind, randomized study demonstrated that XyliMelts reduce tooth plaque by 58% and improve the ability to eat and swallow in those affected by dry mouth.

Dry mouth is the subjective sensation of oral dryness that affects up to 60% of the elderly population, and is caused by various disorders and oral cancer treatments such as radiation to the head and neck. Additionally, a number of medications, including over-the-counter drugs such as antidepressants, decongestants, antihistamines, appetite suppressors, and diuretics produce symptoms of dry mouth. Dry mouth symptoms include a sticky, dry sensation in the mouth, tongue roughness, frequent liquid consumption, difficulty speaking and swallowing, and sleep disruption.

OraCoat XyliMelts is a patented dry mouth product that sticks to the gums on the outside of a molar, releasing one-half gram of Xylitol, which stimulates saliva, and cellulose gum which, combined with saliva, forms a lubricating gel. Xylitol, slowly released in the mouth so it lingers, is effective for reducing dry mouth and tooth decay. Moreover, XyliMelts used at night while sleeping when saliva flow is lowest is the most effective delivery of Xylitol.*

The 21-day clinical study evaluated in patients with dry mouth the effects of XyliMelts on saliva production and ability to neutralize acids, as well as patient comfort. The study was administered to five test subjects who used XyliMelts as recommended: two discs while sleeping, one on each side of the mouth, and as needed during the day. On average, the subjects used four discs each day during daytime hours.

Test results showed the clinical usefulness of XyliMelts for effectively relieving dry mouth. Researchers found that XyliMelts significantly reduced sleep disruption by lasting for six hours while sleeping, when dry mouth is at its worst, while improving mouth wetness upon waking in the morning. XyliMelts also diminished tooth sensitivity to hot, cold, and spicy foods and drinks. The adhering discs more than doubled saliva production while in place, and increased the ability of saliva to neutralize acids that cause tooth decay. Most importantly, the test displayed that subjects using XyliMelts in conjunction with standard oral care showed heightened saliva flow compared to standard oral care alone. XyliMelts not only alleviates symptoms of dry mouth, they also stimulate saliva production.

Overall, subject feedback to XyliMelts was positive, with subjects stating that they would continue using the discs while recommending them to others. Subjects also reported XyliMelts as easy to use with a favorable taste and overall mouth feel.

In a March 2016 Clinicians Report® survey of dentists published by CR Foundation, an independent, non-profit, dental education and product testing foundation, 152 dentists who were familiar with OraCoat XyliMelts rated it more effective than any other remedy for dry mouth, including prescription drugs which came in second.†

XyliMelts are available over the counter at CVS and Rite Aid. For more information on XyliMelts, visit www.oracoat.com. Consumers interested in receiving a free sample (limit one per household) should call 1-855-275-4766.

A companion product to OraCoat XyliMelts for oral cancer patients is OraCoat XyliGel®, a soothing gel with 17% Xylitol buffered to pH 7.4 to relieve dry mouth. It works especially well for people with very low levels of saliva. XyliGel is available online at oracoat.com.

About OraCoat
OraCoat is a division of OraHealth Corporation, the world leader in the breakthrough technology of “oral adhering discs” which slowly release ingredients in the mouth and are safe for use while sleeping. The OraCoat® brand represents a family of products that solve oral care problems by coating the mouth with safe ingredients that become effective when they are slowly released. Our flagship product is XyliMelts® for Dry Mouth, an OTC product. Other oral care solutions in the OraCoat family are planned. OraCoat’s innovative oral care solutions are backed by careful research based on medical science to ensure optimum performance and user safety.