I wanted to demonstrate what we are currently working on for the OH blog………this is simply a sample of something I pulled off the Internet. In time, we hope that all Canadian dentists will share cases with us and in concert with My Dental Hub, a Clinical eChronicle will evolve that will set a new standard in collegial education. It’s just in it’s seminal phase at the moment, but we at OH feel energized by this project and it will be explained further as it builds. in the meantime….here’s a very elegant demonstration…From Drs. Kumar, Belludi of the PMNM Dental College and Hospital of Bagalkot and the Modern Dental College and Hospital of Indore……

Micro implants are widely used for the correction of individual molars in a crossbite malocclusion. To correct the crossbite one has to simultaneously intrude and retract the tooth1. Various authors have achieved such correction by placing a micro implant and stretching an elastic or e- chain over the occlusal surface of the tooth. Though this technique was effective in correcting the crossbite, some limitations and clinical problems were addressed. Problems such as  the precision of the point of force application for stabilizing the elastics on the precise points of the occlusal surface was not achieved and slippage of elastics was also seen their by consuming more time to provide effective results. Here is an illustration of an upper second molar in buccal crossbite, (Figure 1,2)

A micro implant was placed in the palatal alveolar process between the first and second molar roots. (Figure 3)

Two lingual buttons were bonded on the buccal surface of the upper second molar and four composite blocks were bonded on the occlusal surface. Two on either slopes of the palatal cusp and another two blocks, each on the mesial slope of the mesiobuccal cusp and distal slope of distobuccal cusp. These blocks prevented the slippage of the elastics and held the elastic in the shape of a Y. A red elastic was stretched from the lingual buttons crossing over the occlusal surface between the composite blocks in the shape of a Y and engaged to the micro implant (Figure 4).

The Y design elastic, stretching from the buccal surface of the second molar, forms a tripod on the occlusal surface and is effective in simultaneously intruding and retracting the tooth out of crossbite. (Figures 6,7)

A light force and with precise force application for intrusion

Composite blocks prevent slippage of the elastic from the occlusal surface

Effective intrusion and retraction in a shorter period of time 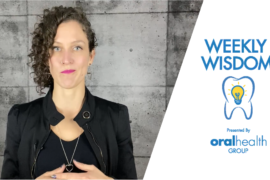