The fundamental principles of preventive dentistry are the preservation of tooth structure and the repair of lesions to minimize the risk of progression of oral disease. The management of the dynamic equilibrium of demineralization/remineralization of tooth enamel is key to this process.

Acidic attack on dental tissue is most often caused by bacterial sugar conversion (caries), or by direct dissolution (stomach acid reflux or consumption of acidic foods and drinks). This damage must be mitigated through the protection of the tooth surfaces, neutralization of oral fluids, and replacement of lost tooth minerals, all tasks where bioactive glass technology can offer tremendous benefits to preventive dentistry. Oral healthcare and dental materials incorporating bioactive glass technology are projected to have a long-term future in oral healthcare.1

Bioactive glasses are derived from the family of calcium phosphosilicate materials that are degradable in body fluids such as saliva and blood. They act as a vehicle for delivering ions beneficial for both healing and remineralization. Bioactive glasses were first developed by Hench2 and his colleagues at the University of Florida in 1969 for the purpose of bone augmentation in orthopaedic surgery. Their use in oral healthcare did not emerge until several decades later with the introduction of Novamin3, the active ingredient in Sensodyne Repair and Protect (GlaxoSmithKline Inc., Mississauga ON). This toothpaste additive continues to employ the same glass formulation specifically developed by Hench for bone augmentation.

Whilst reviewing the properties of bioactive glass materials in the early 2000s, Professor Robert Hill, Queen Mary University, London, UK, realized that this original bioactive glass could be optimized specifically for oral healthcare application by:

Over the subsequent decade, Hill and his co-workers developed fluoro-calcium phosphosilicate6,7 bioactive glass compositions (fluoride bioactive glass, commonly referred to as FBAG), that are featured in BioMin F toothpaste, and subsequently explored their formulation in dental materials such as demineralizing composites, varnishes and cements, innovations that are currently in pre-market development.8

Fluoride bioactive glasses (FBAG) are activated through contact with water. The hydrogen ion of water replaces the calcium ion of the bioactive glass, increasing the pH; this has a neutralizing effect on the local microenvironment. It is possible to specifically design the structure of the silicate glass to control the rate of this dissolution. Under acidic conditions, where there is an increased hydrogen ion concentration, this reaction proceeds more rapidly. This dissolution results in the controlled release of calcium, phosphate and fluoride ions which, in turn, combine to form fluorapatite and then crystalize on the tooth surface, particularly at nucleation sites such as those found in the peri-tubular tissues of open dentine tubules.

When formulated into toothpastes, FBAG is very effective at occluding these open dentinal tubules, thereby providing increased resistance to subsequent acidic attack. (Fig. 1A,B,C) An adhesive system is included in the toothpaste formulation such that the bioactive glass particles bond to the tooth surface, similarly to glass ionomer cements, allowing the active ingredient to remain in situ for many hours after brushing. The benefits of FBAGs in toothpaste have been validated in recent clinical studies9 and also confirmed by many dental clinicians who have prescribed BioMin F (Fig. 2) to their patients over the past 5 years. In a similar manner, the crystal deposition may also occur on early-stage enamel lesions as reported in scientific studies,10 and may aid the remineralization process. 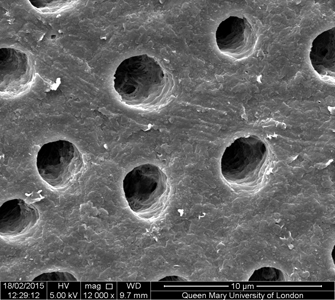 Open Dentine tubules prior to brushing with BioMin. 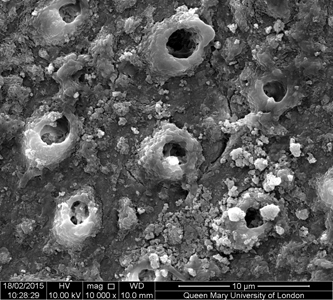 After brushing with BioMin F. 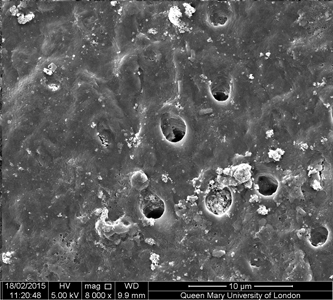 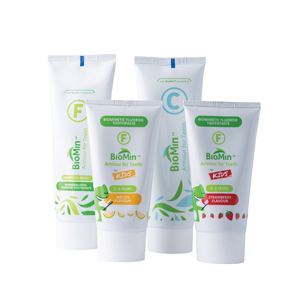 Over the past 60 years, fluoride has become a mainstay of dental public health, incorporated into toothpastes, varnishes and other treatments, and is added to the community water supply in many regions. The positive effects of fluoride include decreasing caries levels in children, particularly in economically deprived areas.11 The advent of fluoride treatment has transformed preventive care since its introduction in the late 1940s.

Fluoride is very effective, but its mode of action remains a subject of debate. It is known, however, that one of its main functions is the acceleration of apatite formation, creating the more stable and acid-resistant fluorapatite on tooth surfaces.12 It is also believed that bacteria are less able to adhere to fluorapatite than non-fluoride treated enamel.13 Unfortunately, concerns have been raised regarding fluoride’s potential toxicity;14 however, these allegations are often made without taking into full consideration the relatively low concentrations applied during toothbrush use.

The debate on fluoride concentration continues further. Many clinicians are of the opinion that the more that is applied, the greater the preventive effect. This is not necessarily true (Table 1) as indicated in the 1990s by Ten Cate,14 who stated “For treatments to be effective longer than the brushing and salivary clearance, fluoride needs to be deposited and slowly released.” This was further supported by Mohammed et al.15 researching the effect of various fluoride ion concentrations on demineralized enamel by F MAS-NMR19. Their results indicated that in (F-) solutions at 45 ppm and below fluoride-substituted apatite formation predominates. In (F-) solutions above 45 ppm, calcium fluoride forms in increasing proportions. Further increases in fluoride concentration cause no further reduction in demineralization but do increase the proportion of calcium fluoride formation. 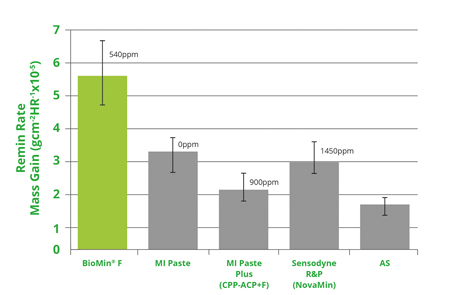 There are references in the dental literature claiming calcium fluoride to be a reservoir which can release free fluoride.16 However, because of the very high insolubility of CaF2 in water (0.015 g/L @18°C), which increases only slightly under acidic conditions, this theory seems rather unlikely. Hence, the demineralizing effect of fluoride is optimized at relatively low concentration. The specific optimal level is yet to be precisely determined, but Hill has proposed that this value is between 5-45ppm. This concept has been supported by Farooq et al in comparing the remineralization effects of FBAG and standard 1450ppm sodium fluoride toothpastes. They demonstrated that the FBAG toothpaste provides increased surface micro-hardness, reduced surface roughness, and greater volume gain.17

Sodium fluoride is commonly featured in standard fluoride toothpastes, although other fluorides are also utilized. In all cases, the fluoride salts are soluble in water and hence the fluoride concentration diminishes exponentially in the mouth due to salivary dilution after brushing, and even more rapidly if the patient rinses their mouth immediately afterward application.

The half-life of fluoride concentration in the mouth at normal salivary levels is 5 minutes; thus, the length of time that the intraoral fluoride concentration remains in the optimal 5-45ppm range is relatively short. On the other hand, the FBAG toothpaste offers a controlled and sustained fluoride release mode over time. This makes it possible to provide high level protection to dental surfaces using much lower fluoride levels than those found in standard soluble fluoride (sodium monofluorophosphate or amino fluoride) toothpastes. FBAG dentifrices offer a viable alternative for the more efficient delivery of fluoride than is found in traditional soluble fluoride toothpastes.

Many experts agree that the life expectancy of a posterior composite resin restoration is between 5 and 7 years. This relatively limited longevity is largely due to composite shrinkage on setting creating marginal gaps that give rise to leakage and secondary caries.18 This durability is inadequate as the profession moves away from mercury/silver amalgam which can last significantly longer but has its own drawbacks. By including FBAGs into dental composite formulations, substituting a high percentage of their inert glass content, researchers have shown it is possible to produce a composite resin capable not only of filling a prepared cavity but also of re-mineralizing the dental structures around hard carious lesions that can now be restored after minimally invasive caries removal.19

The inclusion of bioactive glass in dental composites is believed to inhibit bacterial decay and promote remineralisation.20 Kuzic (Oregon State University) states: “The bacteria in the mouth which cause cavities don’t seem to like this type of glass and are less likely to colonize on fillings which incorporate it.” They are also believed to reduce enzyme-mediated degradation and encourage the remineralization of demineralized dentin.21

The inclusion of FBAGs into dental composite materials creates an apatite-like phase in the marginal gap, (Fig. 3) providing a more effective marginal seal, and preventing acid attack by raising the local pH, thereby reducing the likelihood of composite restorative failure. Bioactive dental composites may improve the longevity and clinical outcomes of composite restorations.18 There is ongoing research to assess the inclusion of additional ions (such as zinc and magnesium) into the FBAG to further enhance the properties of the restorative material.22 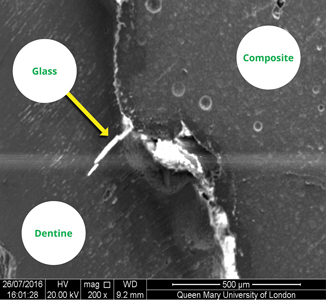 Marginal gap between composite material and dentine filled with Fluorapatite.

Richard Whatley has over 35 years’ experience in worldwide commercial activities with leading dental companies and directing start-up dental enterprises introducing innovative technologies. He combines a BSc in Chemistry and Management with a Diploma in Industrial Studies and has a broad range of commercial, technical and scientific skills from capital equipment, through to professional materials and consumer products. He is currently CEO, BioMin Technologies Ltd.