Traditionally, provisional restorations for porcelain laminate veneers posed a problem for the restorative dentist. They were time consuming, difficult to retain, and esthetically unpredictable. However, newer materials have made fabricating provisionals a routine procedure for dentists. The procedure today is rapid, and it’s easy to achieve excellent marginal adaptation.

In the past, porcelain laminate preparations were more conservative in nature and usually confined to the enamel. Many dentists felt that the patient could survive for a few weeks without much sensitivity or compromised esthetics. Today’s pressable ceramics, however, require preparations with greater reduction, routinely involving the dentin. If left uncovered, such a preparation is likely to result in sensitivity. Thus, a well-made provisional is an absolute “must”.

Provisional restorations are a blue print for the final restoration. They protect the underlying tooth structure from microorganisms that may cause pulpal problems. They also safeguard the teeth from possible drift or super-eruption. Gittleson stated that an astute practitioner can often use a provisional restoration to provide a significant amount of diagnostic, functional, and esthetic information.1 When changing the shape, size, and alignment of teeth, it is critical to have an accurate diagnostic wax up. The Master Diagnostic Model (Valley Dental Arts, Stillwater, MN) is an excellent tool that allows the patient to visualize the desired outcome in color from a three-dimensional perspective. It also allows an accurate matrix to be fabricated for the provisional.

The patient, a 28-year-old female, presented to my office for a smile makeover. Figures 1 to 3 show her preoperative appearance. The diagnosis showed:

Small diastemas on the mesial and distal aspects of tooth 10

Overall, the teeth were short, and the centrals were square.

The patient’s periodontal health was excellent, although she had a blunted papilla between teeth 8 and 9. Our goal was to try to form a more triangular papilla by adding force with the porcelain laminate to the papilla. The esthetic challenge was to avoid any “black holes.”

Because of the patient’s expansive diastema, neither the clinician nor the patient was willing to proceed with treatment until we were certain laminate veneers were the best, clinically-viable solution, producing the desired esthetic results. To this end, we had a Master Diagnostic Model (MDM) fabricated. The pre-operative model is shown in Figure 4. The MDM made of tooth colored wax and pink gingiva is shown in Figure 5. Using the model as a guide, we increased the length of the patient’s teeth and closed the diastema without compromising the length to width ratio. An ideal length to width ratio is width 75 percent of the length.

The MDM was also used to fabricate a matrix for the provisional (see step 4 below). The model was duplicated and poured in stone (Figure 6). A clear bite/matrix impression material (Clearly AFFINITY, Clinician’s Choice Dental Products, New Milford, CT) was extruded directly onto the stone model (this can be done with or without a clear impression tray), forming a matrix for our provisionals (Figures 7-8).

1. Six maxillary teeth were prepared for porcelain laminate veneers by removing enough tooth structure on the distal-facial of teeth 8 and 9 to bring them back into alignment (Nixon Porcelain Veneer Kit 850-016, Brasseler USA, Savannah, GA). The minimum preparation depth was 0.7mm. The interproximal finish lines were placed lingual to the contact point to hide the margin with such large diastemas. The incisal edges were wrapped onto the lingual approximately 1mm to form a definitive seat and to add strength for incisal edge lengthening. Completed preparations are shown in Figure 9.

3. In order to accurately communicate instructions to the laboratory regarding the patient’s facial midline in relation to a horizontal plane, a Symmetry Facial Plane Relator (Clinician’s Choice) was used. Affinity Quick Bite (Clinician’s Choice) registration material was liberally applied to the patient’s lower arch (Figure 10). The patient was instructed to fully close (normal/passive) and hold this position (Figure 11). Quick Bite extrudes labially. Simultaneously, the fingers of the Symmetry arch were covered top and bottom with Quick Bite (Figure 12) and immediately inserted to the patient’s extruded Quick Bite.

The arch was positioned so that the vertical alignment bar accurately reflected the patient’s desired midline and was held in place for 60 seconds allowing Quick Bite to cure (Figure 13). Please note: the patient does not bite on the Symmetry arch fingers, and you must work quickly through this entire technique.

Once the impression material cures, carefully remove the Symmetry arch, dislodge the vertical axis bar, and send it with the final impression to the laboratory.

4. The six prepared maxillary teeth were spot etched (Figure 14). An unfilled bonding resin was placed on the teeth where previously etched and light-cured.

5. The provisional was fabricated using the clear matrix formed previously from the diagnostic model (as described earlier, refer to figures 7-8). Kurtz described a quick technique in 1995 for fabricating direct provisionals for porcelain laminates using a clear vinyl poly-siloxane bite registration material.2 Unlike this case, if you are only changing the color of your final restoration, an impression taken directly from the patient’s teeth with the clear matrix material is adequate.

A flowable composite was carefully loaded into the facial aspect within the clear matrix (Figure 15), which was then seated in the patient’s mouth and light-cured directly through the matrix (Figure 16). There was very little flash to be removed once the provisional material was cured because of the excellent adaptation of the clear matrix to the teeth. Figure 17 shows the final provisional on the day of fabrication.

6. The veneers were inspected upon their return from the laboratory. When the patient returned for the seating appointment, she was anesthetized and the provisionals were removed by slicing through the facial aspect (Figure 18). Note the health of the tissue after removal of the provisional restorations on teeth 6, 7, and 8 (Figure 19). The patient wore the provisionals for four weeks. The small area of unfilled resin was removed with a diamond bur. The teeth were scrubbed with chlorhexidine and pumice to remove any debris.

7. A small piece of retraction cord (Siltrax, Pascal Dental, Bellevue,WA) was placed and the veneers were tried in individually and as a group to check for passive fit (Figure 20).

8. After try-in, the veneers were cleaned with alcohol, acid cleansed using 37 percent H3PO4 (Etch-37 percent, Bisco, Inc, Schaumburg, IL) for 10 seconds, rinsed, and dried. They were also re-silanated, and a thin layer of unfilled resin was applied and lightly air-blown. Do not light-cure the resin at this stage.

9. A light-cured resin cement (Insure, Cosmedent, Chicago, IL) was loaded onto each veneer and placed in a Resin Keeper (Cosmedent) to prevent premature polymerization. The prep sites were etched (Figure 21) and a 4th generation bonding agent (All-Bond 2, Bisco) was applied to the teeth according to the manufacturer’s instructions.

10. The veneers were bonded in pairs, beginning with the central inci
sors (Figure 22). Once seated, the veneers were spot-cured using a 3mm light tip.

11. Cosmedent #1 and #3 brushes were used to remove excess cement. Extreme care should be exercised during this stage. Remove as much excess as possible, as carefully as possible.

12. Glycerin was placed on the margins to prevent formation of an oxygen-inhibited layer, and each veneer was light-cured for 60 seconds on the facial and lingual aspects using a 13 mm light tip.

13. The final clean up was accomplished using rotary instruments and disks on the lingual, a carbide tipped knife on the facial (for minor flash removal), and aluminum oxide strips interproximally. The author does NOT recommend touching the margins with any rotary instrument, ever. Occlusion was checked and any necessary adjustments were made.

Figure 23 shows how we were able to achieve an excellent result without making the teeth appear too large. The teeth were brought into alignment and lightened.

This case demonstrates not only the ease with which we are now able to fabricate provisionals (making veneer temporization a snap), but also the importance of treatment planning prior to preparation. Without the MDM, the final outcome would have been difficult to predict.3 Similarly, without proper tools such as the clear matrix material, the facial plane relator, and proven cementation materials, no clinician would have been able to turn such a complicated case into one that is simple and predictable (Figures 24 & 25).

r. Margeas received both his dental and AEGD degrees from the University of Iowa, where he currently serves as Adjunct Associate Professor in the Department of Operative Dentistry. He has published several articles, and since 1999 has been a clinical instructor at the Center for Esthetic Excellence, Chicago, IL. Dr. Margeas is board certified by the American Board of Operative Dentistry and is a Fellow of the Academy of General Dentistry (AGD). He maintains a private practice in Des Moines, IA.

3.I would like to thank Valley Dental Arts and especially Jenny, for her expertise in fabricating this case. 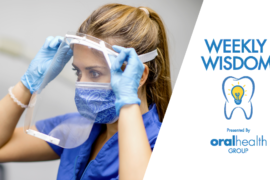