Abstract
Allergy to local anesthetics is a rare condition which poses a unique challenge for dental treatment. In this article, we present a case of suspected allergy to conventional local anesthetics which was managed successfully using 1% diphenhydramine solution with 1:100,000 parts epinephrine as an alternative means of obtaining local anesthesia. Our findings substantiate the existing literature
regarding this agent as a local anesthetic and support its use in the setting of general practice.

Introduction
Patients with reported allergies to local anesthetics present a technical problem for dentists regarding treatment. This issue regarding anesthesia poses a significant challenge in certain situations, such as emergency treatment. True local anesthetic allergy is rare, however, claims of an anaphylactic reaction warrant thorough consideration. As an alternative, 1% diphenhydramine solution has been reported in past literature as an effective and safe local anesthetic for patients who report an allergy to conventional amide-based anesthetics. Diphenhydramine has been described previously as a viable option for anesthesia in emergency situations, when patients decline allergy testing, or for those who have confirmed amide local anesthetic allergies as determined definitively by an allergist.1 The body of literature outlining this practice, however, is limited.

Diphenhydramine is a first-generation oral antihistamine commonly used in the treatment of allergies. It can be administered via oral ingestion, intramuscular or intravascular injection, or topical application. Diphenhydramine crosses the blood brain barrier, resulting in its sedative effects.2 Its local anesthetic properties are thought to be a result of its similar chemical structure to ester and amide local anesthetics, as shown in Fig.1.3 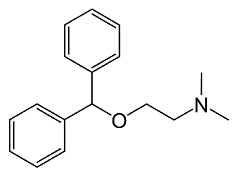 The purpose of this study is to present a case history of reported anaphylactic reaction to conventional amide-based local anesthetics. The aim of this discussion is to portray the challenges of reported local anesthetics allergies and to outline a viable option for safe treatment in the setting of general dental practice.

Case Report
A 92-year-old female was referred by her family dentist to the London Health Sciences Center (LHSC) Dental Clinic at Victoria Hospital for extraction of the upper left second permanent molar (tooth #27). The patient was referred for treatment under general anesthesia as she reported an allergy to all local anesthetics. She had moderate spontaneous pain associated with tooth #27 in conjunction with pain on mastication for a month prior to referral to our service. She was unfortunately unable to provide a clear history regarding her local anesthetic allergy, stating that she was allergic to “freezing” and “could not breathe when I was given it in the ’60s”. Further, she was resistant to allergy testing as was previously recommended. She had undergone most of her previous dental treatment including restorative and endodontic treatment without the use of any local anesthetic. Previous extractions, however, had always been completed under general anesthesia.

Clinical examination revealed no signs or symptoms of an acute odontogenic infection. Tooth #27 was largely composed of an amalgam restoration. This tooth was grossly carious with a grade 2 furcation defect, and tenderness to percussion. Pulp testing showed a loss of vitality. Radiographic examination yielded a peri-apical radiolucency associated with the apex of #27. As such, tooth #27 was diagnosed with pulpal necrosis and symptomatic apical periodontitis. Treatment options of root canal therapy or extraction were presented to the patient and a discussion was had regarding the risks, costs, and benefits of each option. The patient opted for extraction. Options were given to complete the procedure under general anesthesia or to perform the extraction under local anesthesia with a solution of 1% diphenhydramine with 1:100,000 epinephrine. Information was given to the patient outlining that “Benadryl” has been used in the past as a local anesthetic, with successful use in extraction cases similar to her own. The possible side effects of diphenhydramine infiltrations were discussed including: vesicle formation; erythema; burning on injection; tissue necrosis; and sedation. The patient was advised that an escort would be required to ensure safe travel following the procedure due to possible sedative side effects of diphenhydramine. The risks and outcomes of MRONJ secondary to oral bisphosphonate use were discussed. The patient was motivated to attempt the procedure with 1% diphenhydramine 1:100,000 epinephrine and consented to this treatment plan.

We sought out a community pharmacy to have the diphenhydramine solution compounded. Obtaining a 1% diphenhydramine (10 mg/mL) solution compounded with 1:100,000 epinephrine in the community setting posed a challenge. While this solution could be compounded in-house, in this case, Canadian Apothecary was able to compound the 1% diphenhydramine 1:100,000 epinephrine solution provided the patient covered the cost of $183.42 prior to compounding. The cost of compounding was covered under the patient’s Sunlife Financial Drug Plan. The solution would be sterile and safe for injection for three days; thus a prescription was faxed to Canadian Apothecary for same day compounding and pick-up. Two 5 mL glass vials were made, which could be drawn up in disposable 5 mL Luer Lock syringes.

On the day of the extraction, the patient presented to our clinic accompanied by her escort. Five mL of the solution was injected as a buccal infiltration and a left greater palatine nerve block. There was no subjective burning reported on injection. Ten minutes was given for onset of local anesthesia. The patient denied any pain or sensation when a periosteal elevator was used to sever the soft tissue attachment. However, the patient reported pain to forceps placement on the tooth, and so an additional 2 mL of solution was given via buccal infiltration. Profound anesthesia was achieved such that the tooth could be sectioned and the mesiobuccal, distobuccal, and palatal roots delivered separately without any reported pain. The patient was subsequently placed on a prescription of 0.12% chlorhexidine and 500mg of amoxicillin every 8 hours for 14 days for MRONJ prophylaxis. No complications were incurred and the patient healed unremarkably.

A detailed history of the patient’s past reactions to local anesthetics should be investigated when the dentist is faced with claims of local anesthetic allergies. Previous formulations of dental anesthetic have contained methylparabens as a preservative, which are no longer present in single-use dental cartridges since 1984.5 In addition, older anesthetics such as procaine- or ester-based local anesthetics are hydrolyzed by cholinesterase into para-aminobenzoic acid as a by-product of the metabolism of procaine, owing to its higher allergenicity compared to amide-based local anesthetics.7 Finally, if patients are known to have a documented allergy to sulfites, local anesthetic is still safe to be administered, however, formulations must not include any epinephrine as sodium metabisulfite is an antioxidant which acts to preserve the epinephrine.4,6 Mepivacaine HCI 3% or prilocaine HCI 4% may be suitable for these patients sensitive to sulfites.

Case selection is of great importance when considering anesthetizing with diphenhydramine. As there are few true emergency situations in dentistry which warrant immediate treatment, the first step should be referring a patient with a reported allergy to local anesthetics for allergy testing with an allergy specialist physician. If a true allergy is confirmed, treatment can proceed with either diphenhydramine as a local anesthetic, or via general anesthetic. Diphenhydramine has been shown to causing a burning, stinging sensation upon injection, have a higher incidence of hematoma formation, and can have sedative effects such that the patient must arrange appropriate transportation home. This has been seen with higher concentrations such as 5% diphenhydramine.2 The other option – general anesthetic – has its own set of risks to consider. The nature of the procedure required, complexity of medical history, and availability of resources must all be taken into consideration when selecting the most suitable treatment option.

When 1% diphenhydramine 1:100,000 epinephrine solution is the most suitable anesthetic option, a compounding pharmacy in the area will be required to assist in the solution preparation. Alternatively, practitioners can formulate their own solution in office by diluting a vial of commercially available parental injection of diphenhydramine. A recipe for the solution adapted from EM PharmD8 is as follows:

This formulation can be compounded and administered in the setting of general practice offering a readily available and cost-effective alternative for use of this diphenhydramine solution as a local anesthetic.

Conclusions
Reported local anesthetic allergy in patients requiring complex, emergent, or surgical procedures can present a logistical challenge. The use of 1% diphenhydramine with 1:100,000 epinephrine solution for maxillary infiltrations as reported previously in the literature is substantiated by the case reported above as a safe and effective alternative to conventional local anaesthetics. This technique provides a simple alternative and should be considered a viable option in general practice.

David F. Charrette, is Adjunct Clinical Professor and Former General Practice Resident at the Schulich School of Medicine and Dentistry, The University of Western Ontario and London Health Sciences Centre in London, On.

Jason Wong, is a General Practitioner in Midland, On., former General Practice Resident at the Schulich School of Medicine and Dentistry, The University of Western Ontario and London Health Sciences Centre, London, On.

Michael S. Shimizu, is the Chair, Division of Oral and Maxillofacial Surgery at the Schulich School of Medicine and Dentistry, The University of Western Ontario and London Health Sciences Centre, London, On.