High Rates of Hearing Loss and Tinnitus Amongst Dentists: Peril of the High-Speed Handpiece

Abstract
This article will present a review of the literature regarding the high rates of hearing loss, tinnitus and related comorbidities, affecting general dentists, specialists and assistants, as a result of the excessive noise produced by the dental high-speed handpiece (HP) (Fig. 1A). In comparison to other medical practitioners, including dentists who rarely use the HP, the rates of hearing loss are equal to those of the general population. 1

Introduction
In response to the newly adopted workplace safety legislations, as mandated by the Canadian and American governments in the 1970’s, noise surveys were carried out to safeguard the aural health of workers. Building upon that momentum, subsequent surveys were scheduled for industries which were generally not associated with excessive noise; surprisingly, dental clinics and university dental labs were earmarked for concern. 2

The main concern for unsafe noise levels, causing Noise Induced Hearing Loss (NIHL), was and unfortunately remains, the HP. Since the 1960’s, and regardless of design, manufacturer or type, the noise output of these instruments has not decreased in any appreciable way. 3,4

To address the concerns of NIHL there are essentially two ways to proceed, that being to either add or subtract equipment from the practice. Perhaps the easiest route is through the use of custom-made high-fidelity musicians’ earplugs (Fig. 1B), which will no more affect the dentist as does the use of gloves, masks and protective eyewear. Properly fitted, they are discrete, comfortable and will not interfere with patient communication, unlike nearly all other types. To subtract, would come at the expense of removing the HP from as many procedures as possible, however to ensure that the same compliment of services continue to be offered, a change of equipment would be in order. At present, the dental laser seems to be the only possible candidate, regardless of type of laser, duration of use, power settings or proximity to either the main unit or its unique handpiece. 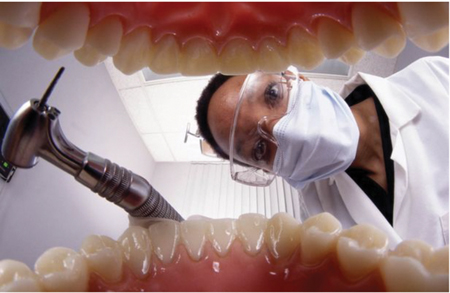 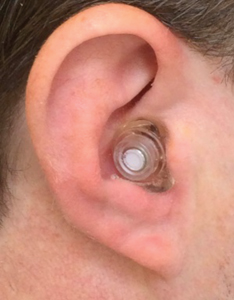 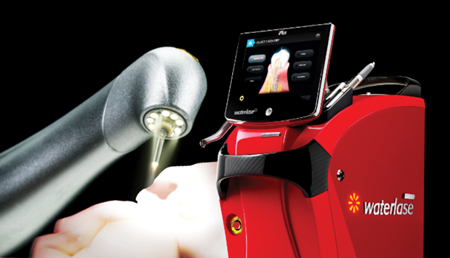 It is a well-accepted fact that construction workers and mechanics are always at risk for NIHL, however at an elementary level the dentist can be likened to a ‘mechanic’ using the HP for ‘construction’. Although the HP produces considerably less noise than large-scale machines, the risk to the dentist lies in the law of inverse square level for sound. Simply put, to halve the distance is to double the intensity of sound. The effect is easily demonstrated with a common household hairdryer which, when held at arm’s length, seems loud yet tolerable, however that tolerance decreases proportionally as the distance decreases between it and the ear. Within an operatory, the impact of this law is just as profound, when comparing measurements taken at chair-side or at a few meters of distance5 (Fig. 2).

Years of practice, unfortunately, has the effect of acclimatizing the dentist to the loudness of the HP, whereupon the loudness of the instrument is simply considered a ‘normal’ part of a particular procedure. That same styled acclimatization often occurs with the volume setting of a car stereo following an extended highway trip – what seemed reasonable during the trip now seems awfully loud the next morning. Although there is much redundancy and resiliency within cochlea, long term exposure to the excessive noise of the HP will lead to permanent hearing loss (Figs. 3 & 4). 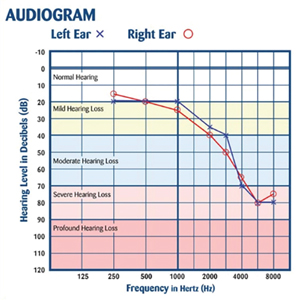 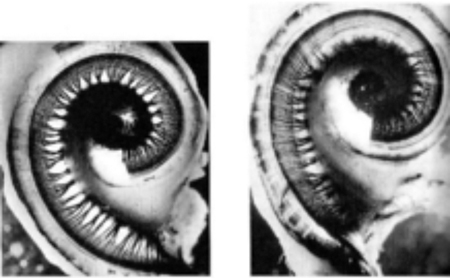 Neural/Mechanical Aspects of Hearing
Hearing is comprised of a complex four-part system (Fig. 5), whereby acoustic energy is captured from the environment by the outer ear and transduced to mechanical energy by the eardrum and ossicles, then finally to hydraulic and electro-chemical energy states within the cochlea. From here it is sent along the auditory nerve to the brain’s auditory centres where it is then ‘heard’. Although sound also finds its way to the cochlea through bone conduction of the mandible and skull, this transmission alone is no cause for concern.

The two most common causes of hearing loss are due to the effects of aging, called presbycusis, and NIHL, which is somewhat commonplace in an industrialized society (Fig. 6). In both instances, the higher-pitched frequencies are the first to feel the effects, which are responsible for 95% of speech discrimination. As a result, even a modest degree of damage in this frequency region will lead to strained communication, more so in noisy environments. 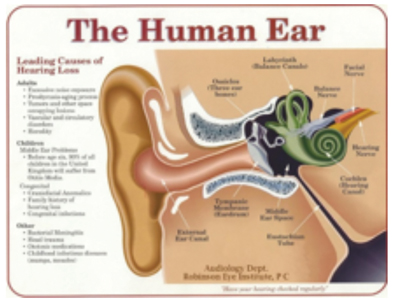 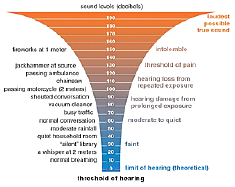 It is quite common for those in the earlier stages of hearing loss to believe that their impairment is either negligible, or a result of unfavorable room acoustics or poor enunciation. These misplaced accusations are often not active ‘denial’, rather the fault is better placed by understanding that those with hearing loss cannot truly understand their own loss: one cannot fully know which sounds were missed, if indeed they were originally missed. Secondly, since the lower-pitched frequencies of speech, such as vowels and guttural consonants, are usually much less affected, it is easy to understand why the blame is directed at those who “mumble”.

Noise Levels within an Operatory and University Practical Labs
Regardless of the advances in engineering, the average noise level of the HP, since the 1960’s, has remained unchanged, averaging between 70-82 dBA, with peaks reaching 105dBA. These figures include all types: electrically-powered; micro-motor; and pneumatic. 6 The intense short duration peaks can lead to minute amounts of permanent hearing loss in as little as 15 minutes of exposure. 6 Add to this the noise produced by scalers (80-92 dBA) and suction (74-80dBA), and it becomes apparent that operatory environment is hazardous to hearing (Fig. 7). Noise surveys are represented in many ways, but the ‘A’ weighted scale is most often used, as it takes into account the fact that human hearing is slightly less sensitive to lower frequencies.

Several studies noted mild variables in noise levels between specialties, however a few, which had focused on pediatric dentistry, recorded intensities which were ‘out-of-the-ballpark’, with peaks reaching a deafening 112.9dBA. 7 Regardless of origin, be it the HP, suction, scaler, lathe/grinder, or in this case excessively loud vocalizations, they are still a cause for concern and must be handled accordingly.

Regardless of what is experienced while in clinical practice, the assaults to hearing begins in the classroom. Fully one-quarter of all dental students experience an average of 15 minutes of temporary hearing loss following labs with hands-on HP practice. 8 Repeated enough times, a temporary hearing loss, or Temporary Threshold Shift (TTS), will lead to permanent loss. The greatest intensities, and dangers, are encountered when drilling enamel (Fig. 8). 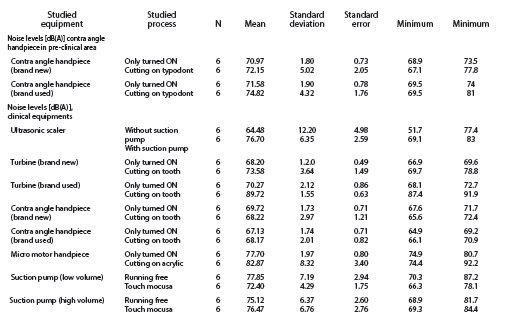 Methods
The research and data collection methods, in the cited studies, reflect the actual exposure time and working distance from the HP, and general clinic experience, by attaching the sound level meters to shirt collars or in chest-level pockets, ever mindful of the inverse square law and actual chair-time. 9 Articles referencing practicing dentists had a mean age in the early 40’s with a 60/40 male to female ratio; n=40 to 180. 10 Mean age of dental students was in the mid-20’s with a 60/40 female to male ratio; n=50. 10 Audiological examinations included the standard compliment of air and bone conduction thresholds and speech discrimination performed in soundproof test booths.

In an attempt to ‘weed out’ other factors contributing to the elevated rates of hearing loss, medical doctors were recruited to act as the control group. They were chosen owing to their shared experiences and similarities in university undergraduate courses, professional office environments and staffing, and salaries, which afford them similar residential neighborhoods, automobiles and leisure activities. The rates of hearing loss for medical doctors, which is in line with the general population, is half that of practicing dentists. 11

Perhaps the most compelling evidence is found within the profession itself, as dentists who rarely use the HP, such as those within academia, share the same low rates as do medical doctors. Not surprisingly, the greatest loss is on the (dominant) right-hand side (Fig. 9).

Tinnitus and Related Comorbidities
Loss of hearing also effects many secondary physiological and neurological changes. Perhaps the best known of these is tinnitus, which is often described as whistles and buzzes. It results from an asymmetrical loss of the sensory hair cells within the cochlea, most often found alongside NIHL. To a degree it is ubiquitous, as 96% of all individuals have some form of it, though it is essentially unnoticed in 84% of the population. 12 The issue is when the subconscious attaches negative significance, which accounts for the remainder experiencing it unfavourably. The negative effects range from slight distraction to catastrophic changes in physical and emotional health and lifestyle. The incidence of tinnitus in dentists is double the average rate of the general population. 11

Perhaps of greatest concern, and only recently understood, is the staggering array of effects that unaided hearing loss has on increasing rates of depression, social isolation, reduced motor co-ordination and physical health and hospital stays. 13 Mental function is also affected, and presents as learning and memory impairment, but most disquieting is the 300% increase in rates of Alzheimer’s 13,14, which is brought about by cross-modal cortical organization. This process occurs when underutilized auditory neurons are ‘high-jacked’ by the now ‘neuron-hungry’ visual centres. In turn the auditory centres attempt to regain their loss compliment of neurons by seeking out those from within the frontal lobes, and thus the cognitive decline. 15

Conclusion
Based upon the wealth of cross-sectional and longitudinal studies, dentists suffer from rates of hearing loss and tinnitus which are twice that of the general population. These high rates are underpinned by the excessive noise generated by the HP which, regardless of technological and engineering advances, has not changed since the 1960’s.

Hearing loss has been directly related to increases in social isolation, reduced motor function, depression and a general decline of cognitive ability, including higher rates of Alzheimer’s.

Reducing these high rates are attainable through the use of hearing protection, limiting the use of the HP and by using alternate instruments for as many procedures as possible. At present, the only other instrument which seems to be capable of replacing the HP, for most procedures, is the dental laser. This relatively new technology does not produce sound intensities which are harmful to hearing, regardless of type, setting or manufacturer. 16

The change in hearing is almost imperceptibly slow and often does not truly present itself until an appreciable amount of damage has occurred. It is recommended that baseline hearing tests be carried out to access the aural health of general dentists, specialists and assistants. OH

Ian Murray has been in practice as a Hearing Specialist for 25 years, in both Toronto and Ottawa, Canada. He attended Carleton University, then completed his education at both George Brown College, in Toronto, and at The Tinnitus and Hyperacusis Centre, in Maryland, USA. As the owner of Murray Hearing Centre, in Ottawa, Canada, his practice is mainly focused on aural rehabilitation and tinnitus therapy, but also addresses the concerns of hearing preservation as an adjunct lecturer at music and recording schools.