Abstract
While several in vitro studies have focused on the antibacterial activity of root canal disinfection protocols and sealing ability of root filling materials, the exact clinical relevance remains unknown. In this pilot study, we aimed at identifying the possible causes of treatment failure in teeth that had been endodontically treated and diagnosed as treatment failures due to persistent pain. Teeth (n=12) diagnosed as failed root canal treatment were extracted when patients were unwilling for revision endodontics and analyzed histologically after staining using Taylor modified Brown and Brenn staining. Nine specimens demonstrated intraradicular bacteria and bacteria within the dentinal tubules while the voids between the root filling material and root canal wall (which was present in all specimens), as well as voids within the root filling material showed minimal or no bacteria. The results of the study also indicated the need for identifying extraradicular biofilms as potential causes of root canal treatment failure. Remnant bacteria within the root canal system appears to be the primary cause for treatment failure and methods should be developed to completely disrupt biofilms within the root canal system.

Few papers have addressed the possible causes of treatment failure using a histological approach.3,4 Nair, in his landmark review, concluded that the causes of root canal treatment failure could be categorized into microbial and non-microbial causes, with residual microbes within the root canal system being the major cause.5 Several studies have evaluated the antimicrobial activity of root canal disinfecting agents and methods. A recent systematic review demonstrated a clear lack of clinical trials on this topic and concluded that with the available evidence, there was no significant difference between sodium hypochlorite (NaOCl) and chlorhexidine in bringing about bacterial reduction or endotoxins.6 This is in contrast to several in vitro studies that show the superiority of NaOCl in bringing about biofilm disruption and reduction of bacterial counts.7-9

Leakage via the root canal system has been a topic of controversy for several years because of the lack of conclusive evidence that laboratory leakage can negatively impact clinical outcomes. Several studies have addressed leakage of root filling materials and it appears that all root fillings leak. The assumption that coronal and apical leakage can result in treatment failure is based on the premise that this can result in ingress of bacteria into the root canal space or can serve as a source of nutrition to the bacteria that were incompletely removed after root canal preparation.10,11 Whether the bacteria that are assumed to be entombed within the root filling material can repopulate on exposure to nutrition also appears to be unknown. While it is known that reduction of bacteria below a specific threshold results in healing12, such a threshold remains unidentified.

In this paper, we qualitatively determine the possible causes of failure of root canal treatment using histobacteriological methods.

Materials and Methods
This pilot study included patients who had persistent pain following root canal treatment. The study design was approved by the Institutional Review Board and Ethics Committee of the Saveetha University. The inclusion criteria were that: patients should be in good health, root canal treatment should have been performed less than five years prior, teeth should be periodontally sound. All patients were offered three treatment choices: non surgical root canal retreatment, surgical endodontics or extraction. Patients opting for extraction were enrolled in this study and 12 teeth were obtained. These teeth were extracted either because of the patient’s unwillingness to undergo retreatment or non-restorability. Informed consent was obtained from the patients. The sample size included 4 mandibular first molars, 2 mandibular second molars, 3 maxillary first molars, 3 mandibular first premolars.

Tissue Processing
The teeth were immersed in 10% neutral-buffered formalin for at least 48 hours immedately after removal. Specimens were demineralized in a aqueous mixture of 22.5% (vol/vol) formic acid and 10% (wt/vol) sodium citrate for three to four weeks, with the endpoint being determined radiographically. All specimens were washed in running tap water for 24-48 hours, dehydrated in ascending grades of ethanol, cleared in xylene, infiltrated, and embedded in paraffin according to standard procedures. Using a microtome, sections with a thickness of 4-5 microns were obtained parallel to the long axis of the root canal. Only the apical segment was evaluated in this study. Random sections from each specimen were stained with Taylor modified Brown and Brenn technique for staining bacteria.13 The slides were analyzed for the following features: presence of bacteria within the dentinal tubules, presence of spaces between the root canal filling and root canal wall, presence of remnant pulp tissue in the root canal space, presence of bacteria in the spaces between the root canal filling and root canal wall, presence of voids within the root canal filling and microbial presence within these voids, debris and microbial presence in the apical foraminal region and lateral canals.

Results
Representative histological images and their interpretations have been shown in Figures 1-6. The presence or absence of the specific findings listed in the Materials and methods has been tabulated (Table 1). Specimen 1 (Fig. 1) showed numerous bacterials masses within the dentinal tubules. These were mostly gram-negative bacteria (A). Spaces were present between the root filling and root dentin (B) and these spaces showed dense bacterial biomasses, which were mostly gram positive (C). There were several voids within the root filling material, but no microbes were found here (D). There were also areas of possible pulp tissue remnants. Three of the 12 specimens showed numerous gram-negative bacterial masses within the dentinal tubules, possibly extending to the external root surface. These bacteria were noticed as dense clumps in the areas close to the root canal wall. Light microscopy could not be used to differentiate between cocci and bacilli. 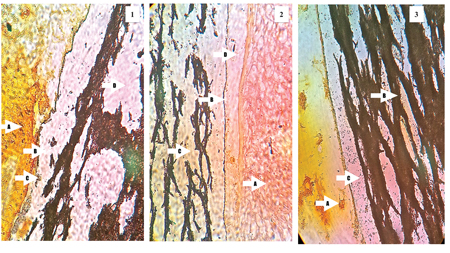 Discussion
The present pilot study was performed to qualitatively characterise the conditions that possibly resulted in failure of root canal treatment. While the exact mechanisms for successful outcomes have not been clearly elucidated, cleaning and shaping of the root canal system with an adequate sealing appear to be factors that favor successful outcomes of treatment.14 Whether each of these parameters can be singled out to have significant impact on outcomes is unknown and this study aimed to find an answer to this question.

All the specimens examined in this study showed voids between the root filling material and root dentin. It is not known if this was because of an improper obturation technique or dissolution of sealer. While several studies have been published on the leakage of root filling materials using different models, its clinical validity has been questioned.15 In general, this leakage could be corono-apical or apico-coronal. The term coronal leakage refers to any entry of microbiota into a root filled tooth so as to set a host response in the periradicular tissues. In contrast, apical leakage implies the entry of microbes or microbial products into the apical third of the root canal system from the periradicular region, serving as a new source of microbes or as a source of nutrition to the microbes that remain within the root canal system.16

The results of the present study showed that only two of the 12 specimens examined demonstrated bacteria in the space between the root filling and dentin i.e., 83.4% of the samples showed the no bacteria in these spaces, which are potential leakage pathways. This makes one question the clinical relevance of “sealing ability” of root canal filling materials and techniques. A very important finding in this study was the presence of bacteria within the dentinal tubules. Nine of the 12 specimens showed bacteria within the dentinal tubules. Two of these specimens also had spaces between the root filling and dentin filled with bacteria. However, it is difficult to address if the bacteria found in these two specimens were present after root canal treatment or they entered via the leakage route. In all the specimens bacteria could be seen along the entire length of the areas analyzed.

Biofilm bacteria demonstrate upto 1000 fold resistance to antimicrobial agents, compared to planktonic suspensions.17 For a root canal irrigant to be clinical effective, it is necessary that it has the ability to disrupt microbial biofilms in addition to demonstrating antibacterial activity.18 Dentinal tubule disinfection and antibiofilm activity of irrigation regimes and techniques within the dentinal tubules has been studied extensively.19-21 These studies show that syringe irrigation of irrigants is the least effective in bringing about intratubular disinfection while activation methods such as passive ultrasonic irrigation, sonic activation, laser activation and light activated disinfection offer superior results albeit variability in different studies. The irrigating solution also appears to play an important role. In vitro evidence consistently shows that sodium hypochlorite (NaOCl) in varying concentrations shows superior antibacterial and antibiofilm activity compared to saline and antiseptics such as chlorhexidine. Furthermore, NaOCl is the only irrigant capable of dissolving vital and necrotic pulp tissue.7-9,22 However, methodological issues could have a bearing on the clinical applicability of these results: (i) Most in vitro studies evaluate the efficacy of irrigating solutions and techniques on artificially created biofilms of Enterococcus fecalis and (ii) most studies only evaluate the antibacterial activity without attributing the relevance to biofilms.

With regards to the first methodological issue, Enterococcus fecalis, a gram positive cocci has been reported to be the most commonly isolated bacteria in failed root canal treatment cases.23,24 This species has been reported to be able to survive extremely harsh environments and hence, withstand intracanal treatment procedures.25,26 However, the present study showed both gram positive and gram-negative bacteria within the root canal space as well as the dentinal tubules. This is in accordance with recent molecular microbiological methods that have elucidated that the microbial biofilm within the root canal system is complex and may contain more than one species, the characteristics of which are very different from single species biofilms used in in vitro models.17,27 Primary root infected specimens have been shown the presence of at least seven phyla (Firmicutes, Bacteroidetes, Actinobacteria, Proteobacteria, Fusobacteria, Synergistetes and Spirochaetes).28 This emphasises the fact that antibiofilm studies should use multispecies biofilms to make the results clinically relevant.

One of the specimens in this study showed that the apical foramen was blocked with debris, and also contained several microbial masses. The concept of patency filing so as to convert the close-ended root canal system to an open ended system, and thereby allow better exchange of irrigants at the apical third has found a controversial place in endodontics.29 Machado et al. reported that patency filing may not always be necessary based on analysis of the risks and benefits. But the authors also stated that there was no clinical evidence to correlate apical patency to outcome of treatment.30 It is possible that this specimen failed because of blockage of the apical foraminal region with debris and lack of irrigant exchange at this region resulting in persistent infection.

In conclusion, this pilot study showed that intraradicular and intratubular bacteria are the primary cause for root canal treatment failure although the possibility of extra radicular infection cannot be ruled out. Clinical procedures must focus on the delivery methods and activation of root canal irrigants to efficiently disrupt biofilms within the root canal system to improve clinical outcomes. OH

Disclosure: The authors declare no conflict of interest.

Nithya Jagannathan is a former Assistant Professor of Oral and Maxillofacial Pathology, Saveetha Dental College and Hospitals, India.She is now a Research Associate at the Faculty of Dentistry, The University of Hong Kong, Hong Kong SAR.