Skip to content
Features › Oral Health › Implant Screws: What Every Dentist Should Know

It is important for the clinician who is restoring an implant, whether it be with a single crown, a fixed or removable prosthesis, to understand the mechanics of a threaded fastener or a screw and why screws may become loose. The prevalence of screw loosening has been reported to be between 5 and 8.8% after five years of function. 1,2 Multiple factors may contribute to screw loosening including: “inadequate torque delivery, embedment relaxation, inadequate prosthesis fit, poorly machined components, excessive loading, screw design, and restoration design.” 3

When two components, an abutment and implant are joined together by a threaded fastener, a screw, they may be referred to as a bolt or screw joint assembly. In order for the screw to be clinically effective as a clamp, the screw is stretched. The process of stretching generates axial forces which hold the two pieces to be clamped together in place. As torque is applied the screw elongates and it is placed in tension. The elastic recovery of the screw creates a clamping force that pulls the prosthetic component and the implant together. When we stop turning the screw some of the initial stresses generated by stretching and twisting are relaxed. The initial clamping force is usually referred to as preload. 4,5

Retention of a prosthetic component that is screwed into the implant is maintained through a predictable screw preload. The amount of initial fastener preload is very important in mechanical joint design. The amount of preload depends on various geometrical and physical features and is determined by the manufacturer through probabilistic design. Typically, preload is calculated to be approximately 75% of the ultimate tensile strength of the screw. If too much torque is used the fastener or the parts intended to be held together may be damaged. It is critically important that original manufactures screws are used and the manufactures recommendation for maximum torque is followed precisely.

In order for the clamping force to be clinically effective it must be greater than the forces applied during function or para-function. When the amount of preload is not sufficient, the joint members can slip or separate slightly with respect to each other. If the initial alignment of the joint interface is not exactly parallel a certain amount of fastener bending cannot be avoided. Thus the importance of ensuring that there is a passive fit between the prosthesis and the implants.

Clinically there are a number of joint separating forces that are exerted on the implant prosthesis. These forces include occlusal contacts that are off the long axis of the implant, lateral excursive or protrusive, parafunctional forces, bruxism, interproximal contacts between natural teeth and implant restorations, and forces generated by a non-passive fitting framework. When the external forces exceed the joint preload, the bolted joint becomes unstable and vibration and micro movement lead to screw loosening. 5 McGlumphy et al suggest several factors to minimize the risk of screw loosening. The loading forces should be along the long axis of the implant, cantilever lengths should be minimized, posterior working and nonworking contacts should be eliminated, centric occlusion contacts should be along the long axis of the implant, anterior guidance should be shared with natural teeth, there should be anti-rotational features included in the restoration of single teeth, the components should be torqued to the manufacture’s specification, and frameworks should be checked to ensure passive fit. 4 It is critically important that a proper exam, diagnosis and treatment plan is completed to ensure the prosthesis has good prognosis.

In order to generate optimal torque, it is essential to use a mechanical wrench or torque-limiting device. Dellinges and Tebrock found that the average torque applied by hand with a screwdriver was only 10 N-cm. 6 Jaarada et al, found that clinicians with little experience tended to develop less torque by hand than clinicians with greater experience and that none of the clinicians were able to develop consistent torque. 7 Thus it is essential that a mechanical torque wrench is used correctly and that the manufacture’s recommended torque values are adhered to. Figure 1 displays mechanical torque wrenches for three different implant manufacturer’s. Figure 2 displays an electric torque wrench produced by W&H. 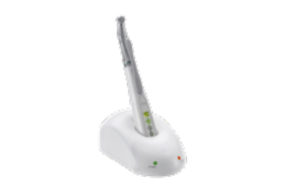 Care must be taken to verify the correct torque value for the screw that is being used. The torque value will differ depending upon the manufacturer, the diameter of the implant and the type of screw. For example, the torque value for the prosthetic screw for a NobelActive 3.0 abutment, a 17 or 30 degree Multi-unit Abutment, or a Ball Abutment is only 15 Ncm compared to 35 Ncm for all other abutments for Nobel Biocare implant systems. 8 Regardless of the implant system that a clinician prefers to use it is critical that the manufactures recommended torque values are followed precisely.

It is also important to ensure that the correct screw is used. Manufactures produce both lab screws, to be used by the Registered Dental Technician during the lab manufacturing process and clinical prosthetic screws to be used to insert the final prosthesis. Most manufacturer’s warranties are tied to using only the manufacture’s original parts and you may void any warranty provided by the manufacturer if you use non-original screws or components. It is acceptable to use a lab screw during the try in process, however only the manufacture’s original prosthetic screw should be used to insert the final prosthesis. Lab screws are not designed to be torqued to the same value as the prosthetic screw and may fracture if torqued. One must also be careful when reusing screws. The effect of inserting and torqueing a screw multiple times is deleterious to the screw. Guaitis et al, (2011) in a lab study showed that after 10 screw insertion cycles that a new prosthetic screw should be used in order to maximize screw reverse torque and maintain preload. 9

Wadhwani provides four rules for torqueing screws which are applicable to most implant systems. Table 1 is adapted from those rules. 10 The first rule is to always use authentic manufacture’s screws and matching components and parts. Compatible parts may not work the same and may result in increased complications including screw loosening and fracture. The second rule is to follow the manufacturer’s recommended torque value. Screws have been designed and tested to function optimally. Failure to follow the manufacturer’s recommendation may result in unpredictable joint behavior. Rule three is to have the torque wrench checked periodically by the manufacturer to ensure it is accurate. Finally rule four is to limit the number of times a screw is tightened and loosened to five times. 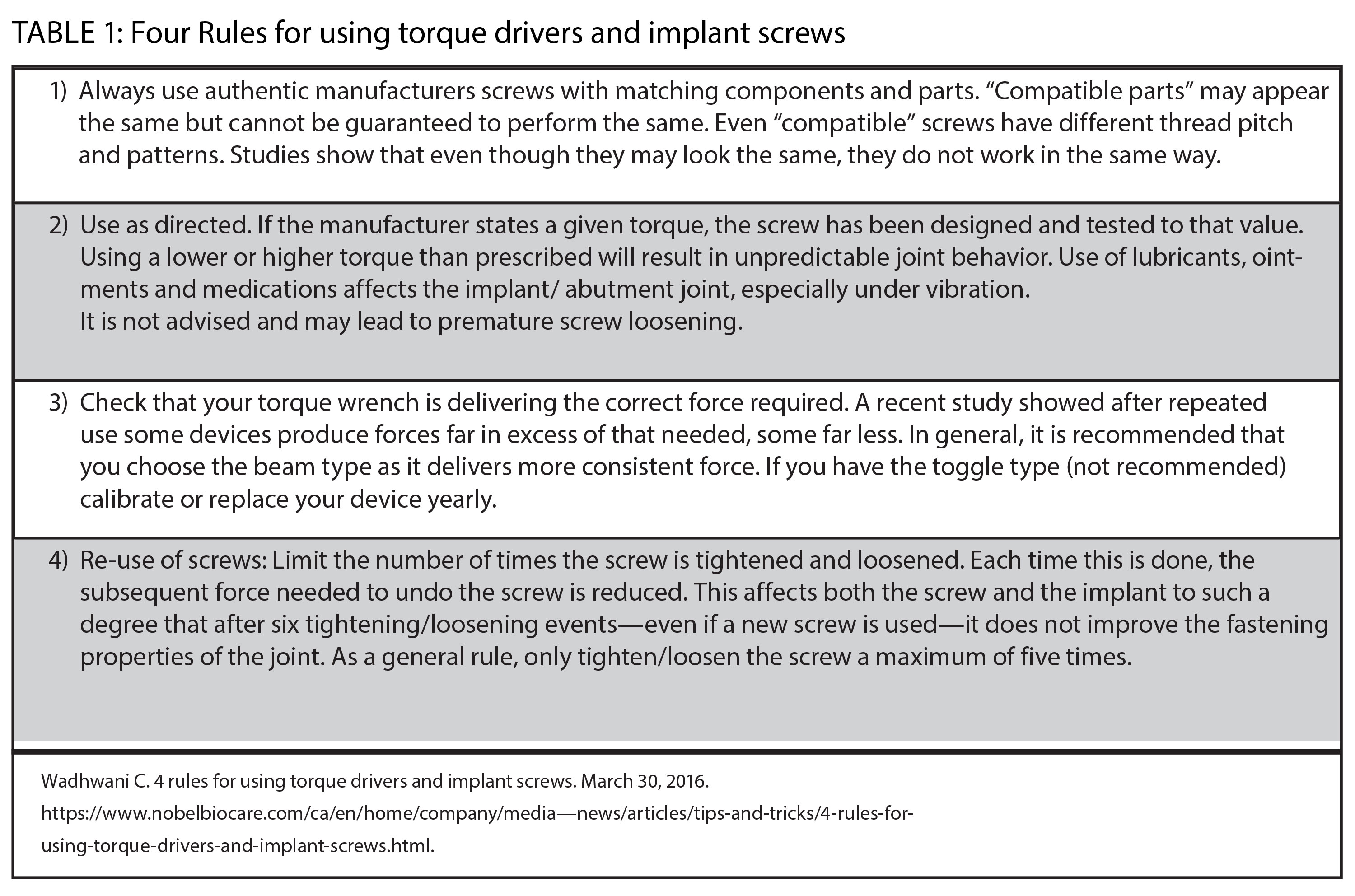 When screw loosening occurs it is important to diagnosis the reason for the screw to have become loose. In particular, special attention should be payed to examining the occlusion. Osseointegrated implants differ from natural teeth in that they lack a periodontal ligament and its neuromuscular reflex which plays a protective role from occlusal forces. A poorly planned occlusion on an implant supported prosthesis could result in screw loosening, screw fracture or bone loss around the implant. 4,11

McGlumphy et. al., suggest that occlusion can contribute significantly to the maintenance of implant screws. 4 Occlusal contacts off the long axis of the implant, particularly lateral excursive contacts, act as separating forces between the abutment and the implant (the screw joint assembly) and should be avoided. It has been suggested that the occlusal scheme for an implant supported prosthesis have the loading forces along the long axis of the implant and that off-axis contacts should be avoided or at least minimized. 4,12

Implants have dramatically improved the lives of many patients and their long-term success is dependent upon a thorough exam and diagnosis and treatment plan meticulous care in executing treatment. In order to do so, the clinician must have a good understanding the materials used and their limitations. Failure to do so will result in an increase in clinical complications and failure. OH

Looking For An Enthusiastic, Caring and Proficient General Dentist

How To: Rethink Aligner Therapy Management

“Guided Biofilm Therapy“ is the Absolute Favorite Among Patients

The Business of Dentistry is Changing. Are you Ready?

Benefit Relief for Canadians in Need

CEO’s Know They Cannot Do It All: Getting Into Delegation!