Malignant Transformation of an Odontogenic Cyst: Report of Two Cases

Introduction
Primary intraosseous squamous cell carcinoma’ (PIOSCC) is a rare malignancy arising centrally within the jaw with no connection to the surface oral mucosa.1 The putative source of the epithelium giving rise to the carcinoma is remnants of odontogenic epithelium such as the rests of Malassez. PIOSCC may also arise from an odontogenic cyst, which is a rare event but a possibility that the clinician should be aware of. We report two cases of PIOSCC derived from an odontogenic cyst to add to the sparse literature on this subject.

Case 1
A 65-year Caucasian female was referred for a radiographic lesion at the left mandible associated with an impacted tooth 3.8. She was asymptomatic and this was found on routine radiographic examination. She was otherwise healthy and did not smoke or drink alcohol.

Examination showed no palpable cervical lymphadenopathy, facial swelling or asymmetry. Trigeminal sensation was intact. Oral soft-tissues were pink and healthy and there was no alveolar expansion. Tooth 3.7 was non-mobile and responsive to cold.

Panorex radiograph showed a well-demarcated, partially corticated, unilocular radiolucency associated with the crown of the impacted tooth 3.8 and extending to the roots of 3.7. (Fig. 1) A cone beam CT study showed subtle mandibular expansion and resorption of the root apex of tooth 3.7. The inferior alveolar nerve canal was displaced inferiorly but the cortex was intact. The radiographic differential diagnosis included a dentigerous cyst and a benign odontogenic neoplasm such as keratocystic odontogenic tumor. 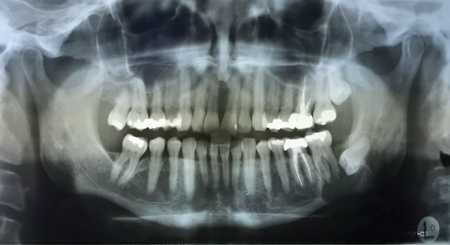 Teeth 3.7 and 3.8 were extracted and the cystic lesion was enucleated. (Fig. 2) Histologic analysis showed a cyst lined by non-keratinized stratified squamous epithelium supported by fibrous connective tissue with scattered chronic inflammation. The epithelium lining showed abrupt transition to severe dysplasia and a moderately-differentiated squamous cell carcinoma invading the cyst wall to a depth of 4mm. There was no perineural or lymphovascular invasion. 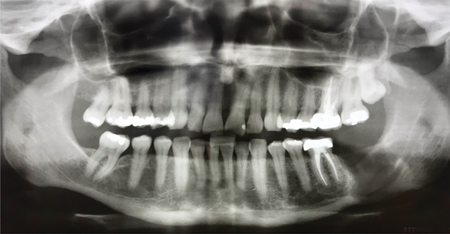 Panoramic radiograph following extraction of teeth (3.7 and 3.8) and enucleation of the cystic lesion.

Clinical-pathologic correlation was consistent with PIOSCC arising from a dentigerous cyst.

There was no evidence of cervical lymph node or distant metastasis (eg. lung) on imaging (CT). Treatment consisted of composite left mandibular resection, supra-omohyoid neck dissection and
reconstruction with a fibular free flap. (Fig. 3) Healing was uneventful and there were no signs of a recurrent disease at 24 months. 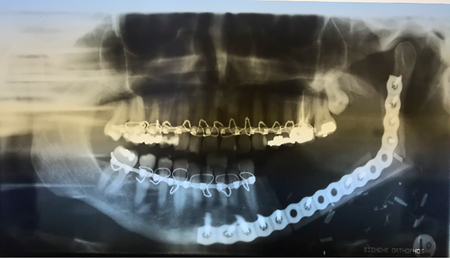 Case 2
A 69-year-old Indian female was referred for a left mandible swelling. There was intermittent mild discomfort. Paraesthesia and weight loss were denied. She was otherwise healthy and did not smoke or drink alcohol.

Examination showed no palpable cervical adenopathy, facial swelling or asymmetry. Trigeminal sensation was intact. Intra-orally, there was buccal and lingual alveolar expansion at left posterior mandible, which was surfaced by pink and intact mucosa. There was no tenderness to palpation.

Panoramic radiograph showed a well-demarcated but non-corticated multilocular radiolucency associated with the impacted tooth 3.8. (Fig. 4) The radiographic differential diagnosis included benign odontogenic neoplasms such as keratocystic odontogenic tumor and ameloblastoma. Tooth 3.8 was extracted and a biopsy was performed. 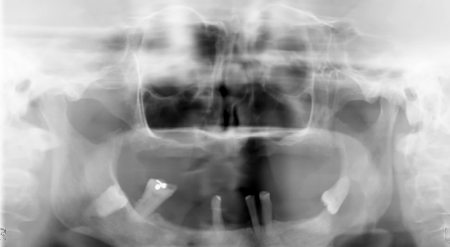 . Panoramic radiograph showing a demarcated, non-corticated multilocular radiolucency at the left mandible associated with an impacted and displaced tooth 3.8

Histologic analysis showed islands and sheets of malignant squamous epithelium; consistent with a moderately-differentiated squamous cell carcinoma. There was no perineural or lymphovascular invasion. There was also cystic areas lined by non-keratinized stratified squamous epithelium. Features of keratocystic odontogenic tumor were not identified.

Clinical-pathologic correlation was consistent with PIOSCC arising from an odontogenic cyst; most likely a dentigerous cyst. There was no evidence of cervical lymph node or distant metastasis on imaging. The patient declined treatment but returned after four months with progressive facial swelling and symptoms (pain, odynophagia, dysphagia and lip paraesthesia). Intra-orally, there was an ulcerated, fungating mass at the left retromolar area. Re-staging CT showed a large left mandibular mass with destruction of the mandibular ramus (Fig. 5) and invasion of the left parotid gland and temporalis muscle. There were multiple enlarged lymph nodes at the left level IB, II and III. Treatment was once again declined. 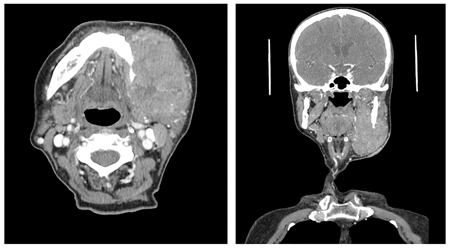 Axial (left) and coronal (right) CT showing a large tumor arising from the mandible with widespread destruction and facial swelling.

Discussion
The most common oral malignancy, by far, is squamous cell carcinoma (SCC) arising from the surface oral mucosa. Much rarer is PIOSCC that arises centrally within the jaw. Diagnosis is predicated on distinguishing it from a carcinoma arising from the surface (i.e. gingiva or maxillary sinus) that has invaded the bone as well as from SCC that has metastasized to the jaw from a distant primary site (e.g. skin, lung).

PIOSCC arising from an odontogenic cyst is rare and there are few well-documented reports in the literature. As there is no connection to the oral mucosa, there is no exposure to the usual carcinogenic factors (i.e. tobacco and alcohol). The pathogenesis for malignant transformation is unclear but it has been suggested that longstanding chronic inﬂammation could be a predisposing factor.2

A review by Bodner et al. included 116 cases of PIOSCC between 1938 to 2010.2 Carcinoma most commonly arose from radicular cyst (60%) followed by dentigerous cyst (16%), keratocystic odontogenic tumor (odontogenic keratocyst) (14%) and lateral periodontal cyst (1%). There was a male predilection (2:1) and the mean age was 60 years but there was a wide age range including cases in infancy.2 The mandible was most commonly involved (79%). A subset of patients were asymptomatic (11%) but the most common presenting symptoms were swelling and pain.

Radiographically, PIOSCC may present as a unilocular or multilocular radiolucency.3,4 Advanced lesions show destructive radiographic features including an irregular, ragged margin and cortical erosion.1,3,4 Early lesions, however, may have innocuous radiographic features that are indistinguishable from a benign odontogenic cyst.3 Diagnosis in these cases is retrospective on microscopic examination of a presumably benign lesion treated by enucleation or curettage.

Histopathologically, the tumor is a SCC, usually well-to-moderately differentiated, in association with a cyst lined by any type of epithelium that can be seen in odontogenic cysts.1,2 Various degrees of dysplasia may be observed in the epithelial cyst lining, which supports the intraosseous origin. PIOSCC should be differentiated from other neoplasms that may histologically resemble SCC such as central high-grade mucoepidermoid carcinoma, squamous odontogenic tumor and ameloblastoma.

Metastasis to cervical lymph nodes is observed in up to 50% of cases and the tumor can spread along the inferior alveolar nerve, and hence, aggressive surgical treatment is required to control the disease.3 The most common approach to treatment has been surgery alone with or without neck dissection or combination therapy of surgery and radiation.2 Survival rates are 62% at 2 years and 38% at 5 years; indicating a poor prognosis although the number of reported cases is small and precludes definitive prognostication.2,5 Mortality appears to be related to local extension of the tumor rather than metastatic disease.3

Summary
Two cases of PIOSCC arising from an odontogenic cyst are reported to add to the sparse literature on the subject. This is a rare phenomenon but one that the clinician must be aware of. Odontogenic cysts are commonly encountered by the dentist. The large majority are benign and often able to be subclassified (e.g. radicular cyst, dentigerous cyst, etc) on clinical and radiographic characteristics. Nonetheless, monitoring alone of a cystic jaw lesion is seldom wise. Rather, it is prudent for routine biopsy of cystic jaw lesions, including pericoronal tissue, to exclude other cystic neoplasms (e.g. keratocystic odontogenic tumor) and given the potential for malignant transformation.

Acknowledgements: The authors thank Drs. David Eller and Ralph Klein for their contribution.

Dr. M. Gilbert, is a staff dentist at Sunnybrook Health Sciences Centre where her primary focus is dental care for medically compromised and oncology patients. She can be reached at Melanie.Gilbert@sunnybrook.ca.

Dr. N. Blanas is a staff oral and maxillofacial surgeon and dentist-in-chief at Sunnybrook Health Sciences Center. He can be reached at Nick.Blanas@sunnybrook.ca.

Dr. H. Klieb, is a staff oral pathologist at Sunnybrook Health Sciences Center with cross-appointment to the Department of Laboratory Medicine. He also leads the oral pathology diagnostic service at LifeLabs. He can be reached at Hagen.Klieb@sunnybrook.ca.