Molecular Iodine: Could This Be a Game Changer for Dentistry?

It looks like 2020 is bringing the Canadian dental profession a gift, in the new selection of molecular iodine (I2) products from ioTech International. These products, surpass all of the existing gold standard disinfectants. Coming out of the gate, these products appear to be game changers in antimicrobial chemistry. Dr. Gordon Christenson named ioRinse the “Best in Class” antimicrobial agent in Clinicians Report for 2019. This technological breakthrough appears to have unlimited indications in medical, dental, agricultural and veterinary fields. To top it off, I2 is an essential element, natural, organic and safe for chronic use and it is being priced with the most affordable of all the antimicrobials.

History of Iodine Use
The recorded use of iodine in medicine, dates back to 5000 BC when seaweed and sea sponges were used to shrink goiters. Lugol’s iodine was introduced in 1829, tincture of iodine in 1908 and finally povidone iodine PVP-I in 1955 (brand name: Betadine). ioTech’s patented molecular iodine products first surfaced in 2017 after several years of research and development to make iodine soluble and stable in aqueous solutions (Fig. 1). Betadine has 31,600 ppm of total iodine but only 3 ppm of molecular iodine; Iotech has less than 1000 ppm of total iodine but up to 600 ppm are actually molecular iodine. Since it is ONLY the molecular iodine that is a biocidal species of iodine, all the other species in Betadine or Povidone Iodine (PVP-I) contribute to staining or toxicity but DO NOT kill microbes (Figs. 1 & 2). 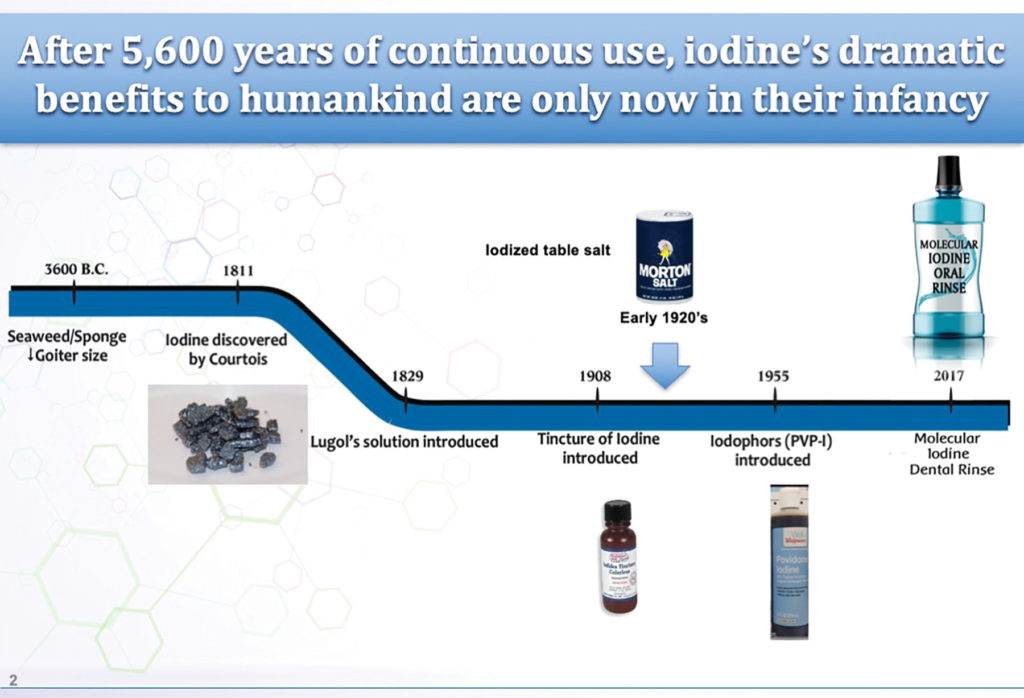 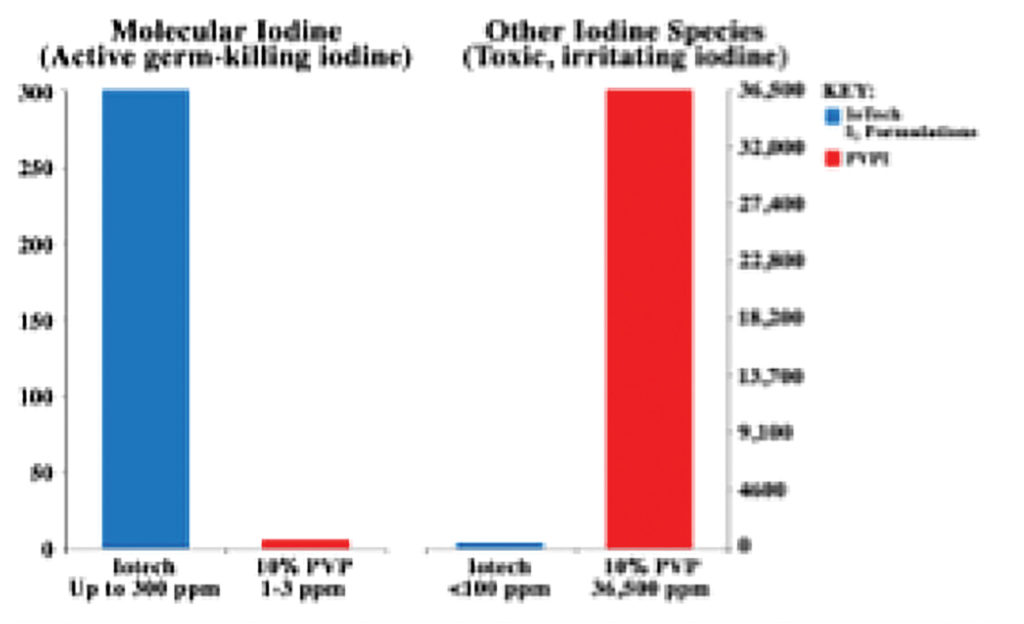 Povidine Iodine vs. Molecular Iodine
First, let’s distinguish between PVP-I and I2 so that we better understand these very similar sounding, but very different acting, germicidal agents. PVP-I is an aqueous solution of several different species of iodine (including iodide, iodate, triiodide, hypo-iodous acid and molecular iodine). The iodine in PVP-I is bound to a large organic molecule, polyvinylpyrrolidone which, being highly soluble in water, carries the different iodine species, which have varying degrees of solubility, into solution along with it. 10% PVP-I (common brand: Betadine) is used in hospitals, medical and dental offices worldwide. It contains over 30,000 ppm of total iodine. The iodine species present in the least amount is I2 which is present at only 1-3 ppm1. All of the other species of iodine present contribute to staining, toxicity and irritation, but are not biocidal. Out of the over 30,000 ppm of total iodine, the 1-3 ppm of I2 accounts for all of the antimicrobial activity of PVP.

ioTech International, a Florida-based antimicrobial company, has developed and patented stable aqueous formulations of I2 which contain over 100 times the available I2 (compared to PVP-I) while limiting the other non-bioactive iodine species from 30,000ppm to just a few hundred ppm (Fig. 1). This dramatically increases efficacy while drastically minimizing overall toxicity. The need for polyvinylpyrrolidone is also eliminated in these formulations. ioTech’s I2 formulations are essentially clear and do not stain compared to PVP-I, even at 10 times the strength of PVP-I (Fig. 2).

ChloraPrep, a leading pre-operative surgical skin prep containing two germicidal agents, 2.0% CHX and 70% isopropyl alcohol, required four times longer to achieve a 4.0 log kill of Aspergillus brasiliensis (a highly resilient fungus) than a 300 ppm solution of I2 alone. PVP-I was completely ineffective against Aspergillus brasiliensis after 30 minutes but the fungus was completely inactivated within one-minute by I2. Similarly, Staph aureus was completely inactivated by an I2 formulation within 30 seconds but required five minutes for PVP-I to achieve the same result.

Several studies have demonstrated the ability of iodine to inactivate Strep mutans and to inhibit caries. A 25ppm I2 mouth rinse completely inactivated Rhinovirus (a resilient, non-enveloped virus largely responsible for Upper Respiratory Infections (URIs) in 30 seconds, where CHX Oral Rinse, Listerine, Scope and Colgate Total mouthwashes were completely ineffective.8 An I2 pre-procedural mouth rinse for patients is a far better choice to inactivate aerosolized bacteria and viruses than currently available mouthwashes. A recent study conducted at the Department of Periodontology, Tokyo Dental School concluded that at a 30 second contact time, iodine was effective in inactivating the bacteria in periodontal biofilms.9 A joint study conducted by the departments of periodontology at three European dental schools found that the persistent effect of iodine on subgingival microbial flora was far greater for iodine than for CHX (31 days vs 7 days).10

I2 is rapidly effective against viruses, bacteria (both Gram negative and Gram positive), fungi and spores. In one study of hospital-level surface disinfectants, an ioTech I2 formulation inactivated major pathogens responsible for Hospital Acquired Infections seven times faster than the fastest acting of 29 EPA-registered hospital disinfectants from major U.S. manufacturers. In another study, an I2 formulation inactivated a broad range of pathogens in one application within one minute that required Clorox Disinfectant Spray and Lysol Disinfectant Spray 10 minutes and multiple applications to achieve.

A key benefit of iodine formulations is that, unlike CHX and other antimicrobial agents, iodine does not induce resistance development in targeted microorganisms.12 The substantivity (ongoing residual effect) of iodine for up to 72 hours is also well documented.

Molecular iodine stands up to comparison to the gold standard of care with flying colours. Figure 4 shows a comparison of molecular iodine against both Betadine (PVP-1) and CHX. Note the molecular iodine shows best because it doesn’t allow for bacterial resistance, has the boldest spectrum of activity (including rhinovirus), has the most rapid speed of kill, the ability to use it long term without staining, no calculus formation or bad taste issues. Compared to the CHX, it was the safest with no known side effects, not flammable like CHX, and no history of issues like affecting the microbiome adversely with chronic use, carcinogenicity, mucosal irritation, staining, altered taste sensation, occasional bacterial contamination, or rare but reported anaphylactic shock, which have all been associated with CHX. Chlorhexidine is also often augmented with 70% isopropyl alcohol to enhance its bacterial efficacy which is not necessary with I2. The molecular iodine also demonstrated the longest lasting duration of effect. 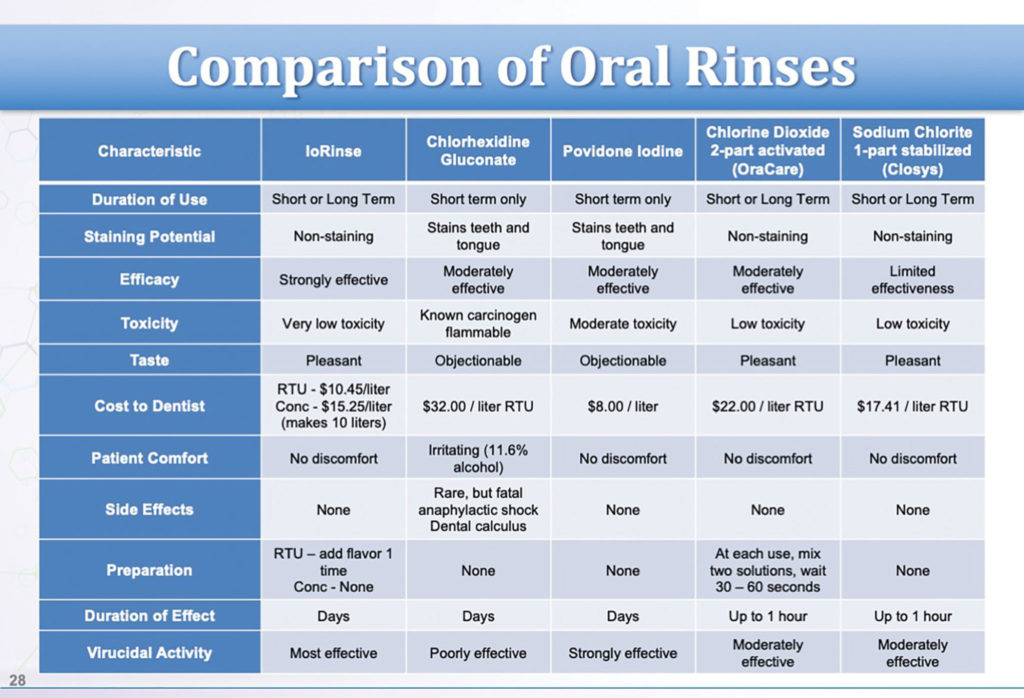 Bioscience Laboratories (Bozeman, Montana 2016-2019) did a comparison of molecular iodine (I2) to CHX oral rinse (Fig. 5). The two were compared for efficacy against: 1) Fusobaterium nucleatum (periodontal), Streptococcus mutants (dental decay), and Rhinovirus (upper respiratory infections) and human Coronavirus. Molecular iodine came out ahead of CHX for all three cases. In fact, it was the only one that killed the Rhinovirus and it was more effective against ariogenic and periodontal bacteria, and Coronavirus, taking only 15 seconds to completely inactivate all of these pathogens. In another BioScience Laboratories study, comparing the virucidal effect of several oral rinses, a 25 ppm I2 oral rinse completely inactivated Rhinovirus and Coronavirus in 30 seconds, where Listerine, Scope and Colgate were ineffective. 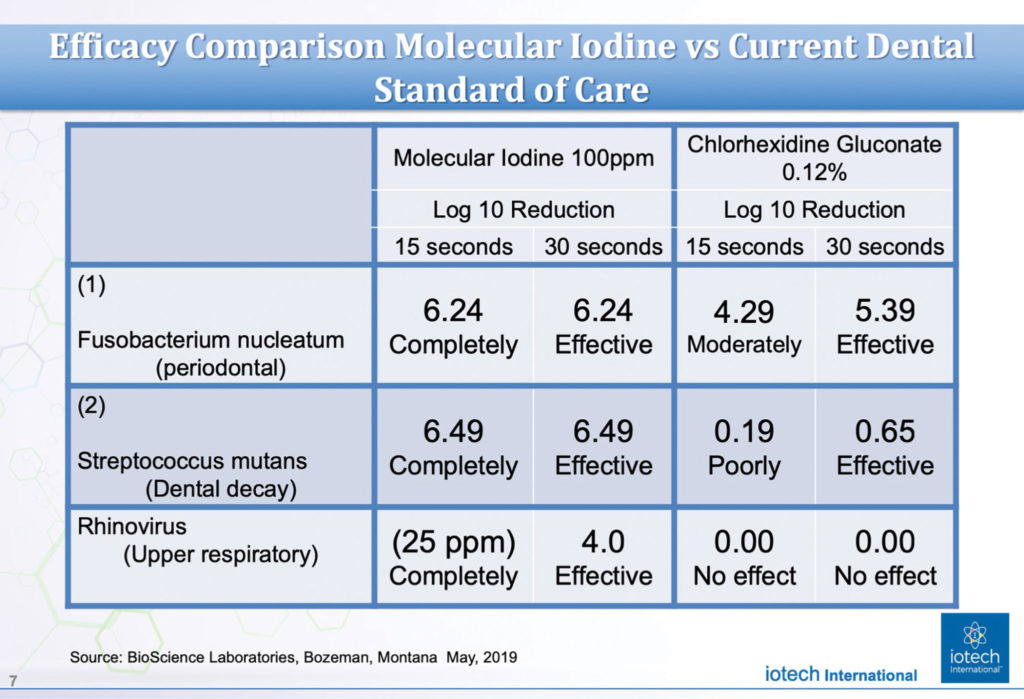 Validation for the use of iodine in the dental arena
The American Heart Association, the American Dental Association and others recommend rinsing periodontal sites with povidone iodine. Professor Jorgen Slots at Herman Ostrow Dental School of Southern California has cited povidone iodine as having all the characteristics for becoming a first choice in the treatment and prevention of periodontal disease. With the new I2 products being so much more efficacious than povidone iodine and more efficacious and safer than Chlorhexidine Gluconate and with none of the drawbacks of either, it’s hard to imagine that these products would not be mainstream in dental offices in the very near future. 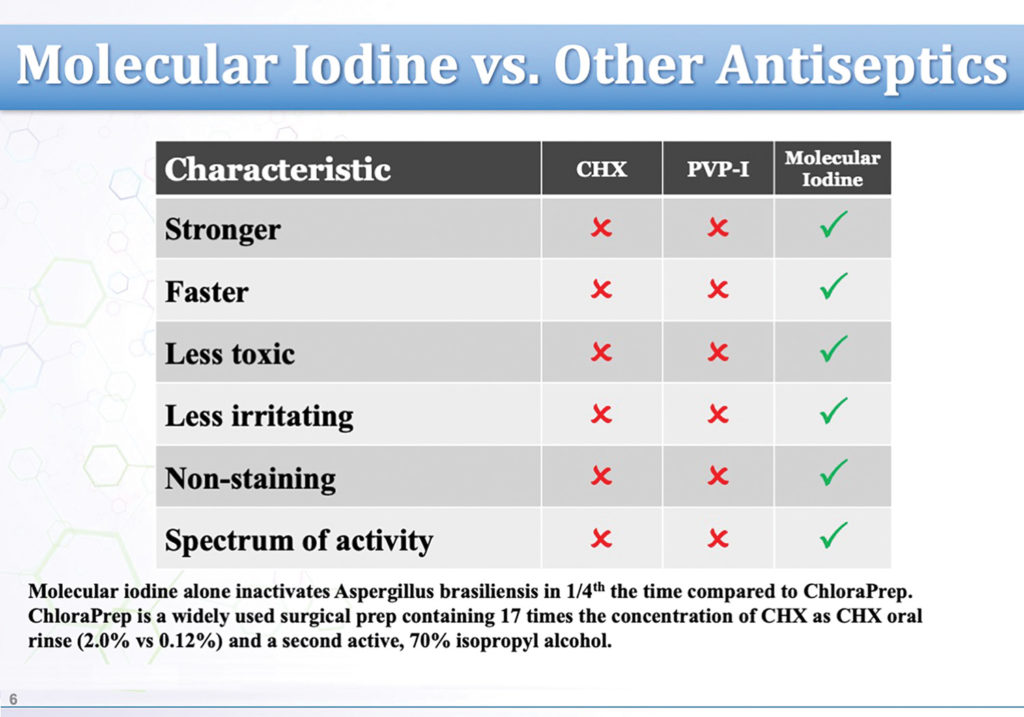 Besides being rapidly effective against periodontal and cariogenic pathogens, molecular iodine penetrates oral biofilms and it destroys bacteria that produce volatile sulfur compounds, making it a great product for halitosis too. Reports show that an increase in the concentration of the molecular iodine used will result in a corresponding greater biocidal activity, allowing for titration of the concentration depending on the need (Fig. 7).

Suggested indications for use of molecular iodine in dentistry
Periodontal disease (affects 75-80% of adult population), tooth decay (affects 96% of Americans), all topically treated oral infections such as fungal, viral or bacterial, oral mucositis, thrush, canker sores, herpetic ulcers, pre and post procedural rinses, in-office subgingival irrigation, and daily at-home use, including use in units such as water irrigation devices or tray application as a gel. Caries management protocols might include I2 and a combination of xylitol/erythrotol (25%) with I2 is showing promise; endodontic indications are as an end irrigant, file lubricant, ultrasonic canal solution, antimicrobial sealer+++. A second article will follow with indications and methods of use of I2 in the dental office.

Molecular iodine’s new breakthrough technology advantages
Other products are contra-indicated for chronic use. Molecular iodine is an essential nutrient and is safe for chronic use. It is used in very low concentrations and is strongly effective against bacteria, fungi, viruses and even spores. This product is clear and non-staining. It is more effective and safer than chlorhexidine gluconate, povidone iodine, peroxide, alcohol or any other currently available mouth rinse. It is the most effective and efficient product at reducing both periodontal and cariogenic pathogens without inducing microbial resistance. This product is natural and organic and can be delivered for home use, so chair time is not required to treat with it. Other advantages include: 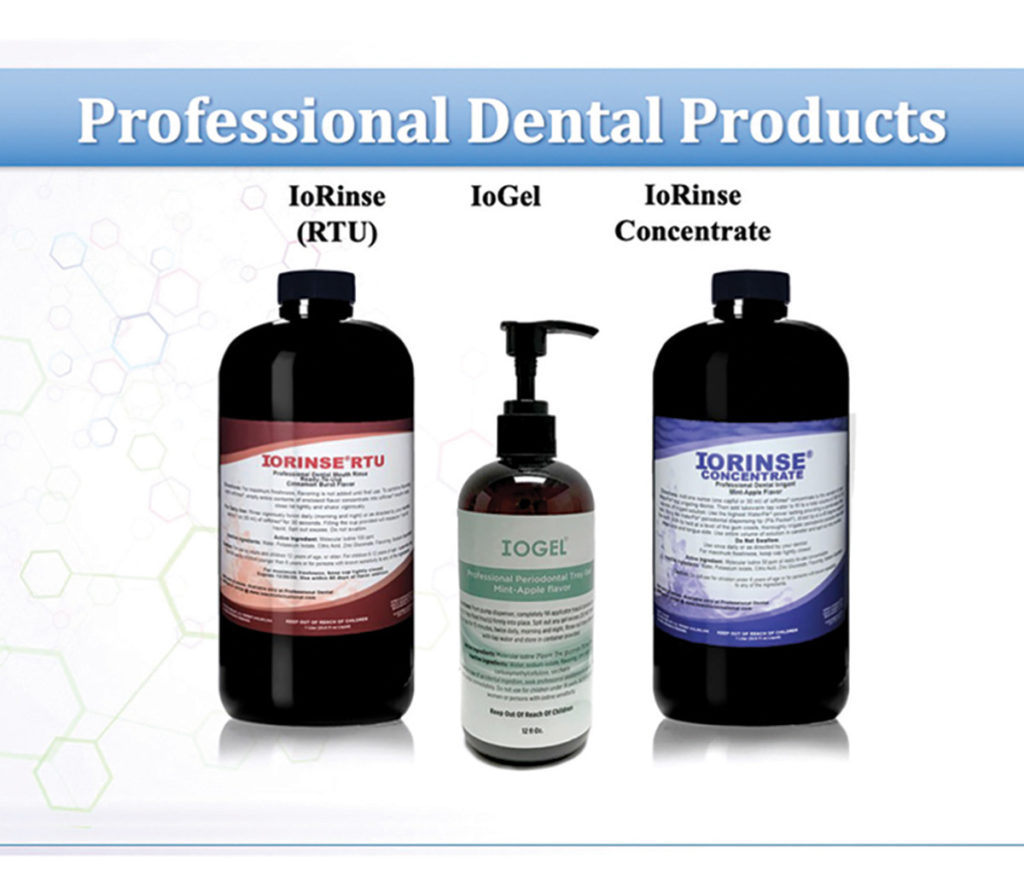 Any inquiries about the products or for purchase can be made by contacting ioTech International, https://iotechinternational.com. One bold periodontist from Baltimore Dental, who beta tested ioTech rinses in his office has suggested that, “ioTech products will likely be as therapeutic as scaling and root planing in the treatment and management of periodontal disease”. This is hard to imagine but if we can control the biofilm and microflora intraorally in a safe fashion, we solve the majority of microbial oral diseases, especially related to periodontal and carious pathology.

This safe, effective, natural and organic antimicrobial is showing real promise to becoming the chemotherapeutic/preventative agent of choice in the dental profession. We look forward to further research and validation of new I2 products in the future.

Disclaimer: Dr. Herb Moskowitz is the Chairman and Co-Founder of ioTech International and Co-Author of ioTech’s patents; Dr. Janice Goodman has a financial interest in the company being profiled.

Herb Moskowitz has 40 years of healthcare experience, including 25 years in the clinical practice of dentistry. He can be reached at herbmoskowitz@iotechinternational.com.

Janice Goodman practices general dentistry in downtown Toronto and is a member of the Editorial Board of Oral Health Dental Journal. She can be reached at dentistryinto@gmail.com.


37 Comments » for Molecular Iodine: Could This Be a Game Changer for Dentistry?