The current understanding of the progression of dental caries and tooth break down is attributed to acids and enzymes generated by bacteria. However, an important contributing factor to caries, the immune system, has not been considered before.

Neutrophils are an important part of the innate immune system and constantly enter the oral cavity10 (Figs. 1 & 2). Neutrophils enter from the gingival sulcus, and come in contact with bacteria and release their enzymes.11 These immune cells enter the mouth at increased rates in patients with periodontal disease and contribute to the progression of inflammatory periodontal diseases.11-13 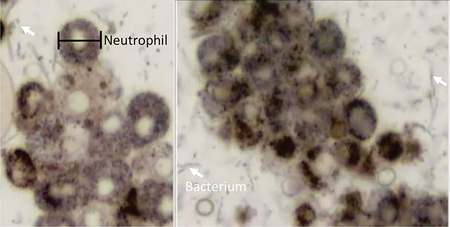 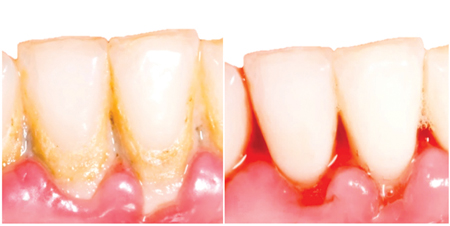 It was hypothesized that in addition to the contribution of salivary degradative activities and bacteria, neutrophils have enzymatic activities that could degrade methacrylate resin-based restoration materials, tooth dentin and the restoration-tooth interface and potentially contribute to recurrent and root caries. Our basic science research has shown that human neutrophils can break down resin composite material and demineralized tooth dentin.14 The following will explore the degradative potential of neutrophils towards resin composite and tooth dentin, and related considerations.

Around 40 years later at the University of Toronto, this concept was revisited. We knew that neutrophils were present at high concentrations in gingival crevices, and covered plaque/biofilm at the gingival margins (Fig. 4). Additionally, we knew that neutrophils are “power houses” that release a combination of catabolic enzymes in response to microorganisms. 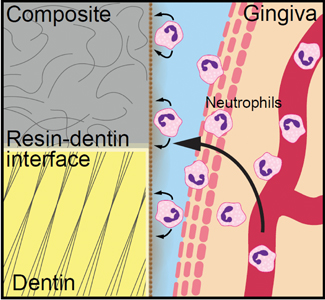 Neutrophils could be a potential factor leading to the premature failure of resin composite restorations. Neutrophils enter the mouth from the gingiva and form a wall along the tooth and the plaque/biofilm. Neutrophils constantly release their components onto the biofilm and tooth structure underneath, breaking down tooth dentin and resin composite.

Our group aimed to see if neutrophils possess specific enzymatic activities that have previously been shown to break down resin composites and adhesives. Degradation of this kind has also been known to accelerate the breakdown of the interface between resin restoration and the tooth leading to increased amounts of oral fluids and bacteria penetrating the gaps at the interface. This could lead to premature failure of restored teeth.4-7

Our initial results14 showed us that neutrophils, at similar concentrations to those in the mouth, had this specific enzymatic activity (cholesterol esterase-like activity). With further tests we identified that neutrophils had the ability to degrade bisphenol A-glycidyl dimethacrylate (BisGMA), the universal ingredient used in resin composites and adhesives, in its monomeric form.

The integrity of the resin restoration-tooth interface is very important to the longevity of a restoration, which led us to look at the neutrophil’s potential effect on the other important part of this interface, the tooth.4-7 In a patient who is developing caries there will be surfaces of tooth that are coated in microbes that are generating acid (Fig. 5), demineralizing the local tooth structure, and exposing the organic collagen fibril matrix.18 Neutrophils are constantly recruited from the blood to the oral cavity through the gingival sulcus, and have a concentration ranging from 1-10 million cells in the mouth and will also be in contact with the tooth structure.10 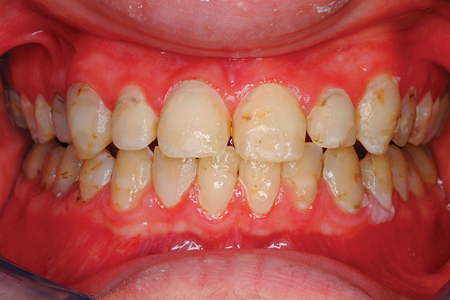 Our results showed that similar concentrations of neutrophils had the specific enzymatic activities (collagenase and gelatinase, matrix metalloproteinase (MMP) activities) that are known to break down organic collagen matrices. Furthermore, the neutrophils were able to break down the collagen in demineralized dentin within 24 hours and at a higher rate than saliva, bacteria or endogenous dentinal enzymes. This biodegradation was measured using advanced liquid chromatography technology to quantify the amount of breakdown by-product and through microscopy imaging at high magnification (Fig. 3).

Neutrophils have destructive and antimicrobial enzyme filled granules that can be released in response to bacteria.11 Invading microorganisms in the mouth cause oral neutrophils in healthy individuals to become activated and release of their enzyme filled granules.19 Our study looked at the degradative capability of resting non-activated neutrophils. Therefore, the results of our study likely underestimate the effect of neutrophils on the degradation of resin and dentin compared to clinical situations, where the neutrophils would be in an activated state. The co-existence of cariogenic bacteria and neutrophils at the site of developing caries could lead to worsened tooth breakdown, from the bacterial acids demineralizing the tooth structure and promoting the release of degradative enzymes from neutrophil to break down the remaining collagen structure. Additionally, a combinational effect could be seen from esterases from saliva, bacteria and neutrophils, which can all degrade the resin at the restoration-tooth interface and potentially lead to early failure of resin composite restorations.

Neutrophils enter the mouth mostly from the gingival sulcus placing them in contact with tooth dentin, root dentin and in the case of gingival proximal (Class II) and cervical (Class V) restorations, resin-dentin interfaces (Figs. 4 & 5).20 These areas are also more prone to biofilms that produce acid and demineralize the tooth structure.18 In the gingival sulcus there is a relatively increased concentration of neutrophils and therefore an increase in their degradative potential. When neutrophils are in contact with bacteria as part of the immune system they attack and become stimulated releasing their catabolic enzyme contents.21 It is expected that at clinical instances of resin-dentin interfaces located at gingival margins, bacterial biofilm will be present, and neutrophils will have a directed attack/release causing a great impact on the resin and/or dentin degradation. This degradation could be a factor contributing to recurrent caries, which are located at gingival margins of proximal (Class II) and cervical (Class V) restorations in healthy patients. Degradation of this kind could also be a contributing factor to primary root caries, where biofilms on the root dentin will stimulate the neutrophils that enter the mouth to release enzymes that can break down the demineralized tooth.

Many dentists have patients who care for their oral health, but still have caries. This could be happening because the immune system has not been considered before in the dogma of caries development. We believe that the immune system, more specifically neutrophils, play an important role in the breakdown of resin and dentin and in the development of recurrent and root caries at gingival margins. We do not know for certain why some people are more prone to our proposed immune system-based caries theory and yet to fully identify the specific degradative enzymes or factors, however, we are continuing to study this and hope to find an answer. It is speculated to be some sort of misbalance in the reaction of the immune system to microbe populations is one of the contributing factors. Patients with inflammatory disease or altered immune system function may have increased or decreased risk of caries because of changes of neutrophil populations in the mouth. When encountering a patient with caries and starting to think about preventive therapies, the harmony between oral health and the immune system should be considered.

Understanding how neutrophils contribute to caries is important. This was the first study to characterize resin composite and dentinal collagen degradation by neutrophils. It is still not known if neutrophils are a contributing factor to caries because of many confounding factors, which include the effects of neutrophil-bacteria interactions, the inability to utilize neutrophil deficient mouse models, and the potential synergistic effects of degradative factors from neutrophils, saliva, bacteria and dentin. Our study showed that neutrophils can break down resin composites at a similar rate to salivary and bacterial enzymes. It was also shown that neutrophils can break down demineralized dentin at similar or higher rates than saliva, bacteria and endogenous dentinal enzymes. This provides evidence that clinicians should be aware of the role of neutrophils and the patient’s immune and periodontal status when considering caries risk and development. Bacteria are still likely the main contributors to oral disease, specifically caries, however the contribution of the immune system is likely a significant one.

Russel Gitalis is a Master of Science (M.Sc.) candidate in the Faculty of Dentistry’s collaborative program with the Institute of Biomaterials and Biomedical Engineering, University of Toronto. Russel’s research focus is on the degradation of resin composites and tooth dentin by human neutrophils. He will be entering the Dental Program at McGill in September and is pursuing a career as a research-clinician.

Dr. Yoav Finer is a Professor, George Zarb/Nobel Biocare Chair in Prosthodontics, Faculty of Dentistry and the Institute of Biomaterials and Biomedical Engineering, University of Toronto. His research focuses on the development of novel dental biomaterials based on host-biomaterials and microbial interactions. He maintains a part time prosthodontics practice.

Dr. Michael Glogauer is a Professor at the University of Toronto and Head of Dental Oncology at Princess Margaret Hospital. His research and clinical interests focus on developing novel bone grafting approaches prior to implant placement and the role of the oral innate immune system in maintenance of health. He is focusing on using oral innate immune biomarkers to detect early stages of periodontal diseases. He is a periodontist at OMGPerio.ca.