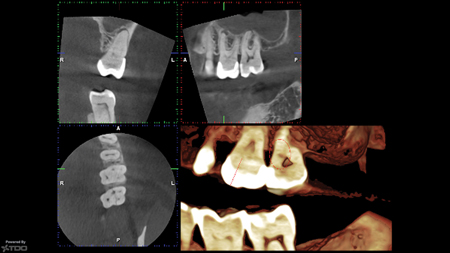 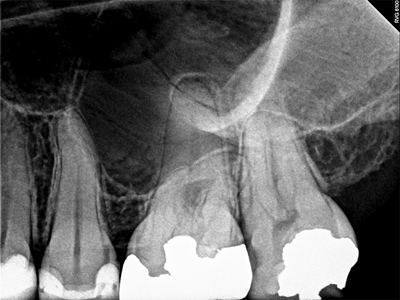 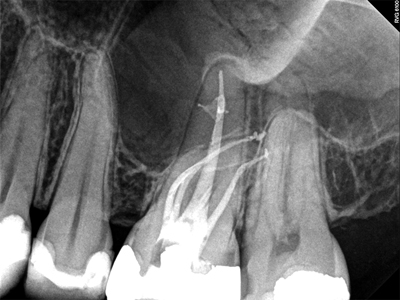 This article was written to provide the general practitioner with an evidence-based and clinically relevant irrigation protocol, which reflect the advancements in irrigation and canal disinfection that have occurred in the past two decades.

Traditionally, and in some ways today outside the specialist community, NaOCl has been the primary endodontic irrigant with little thought given to either removal of the smear layer or activation. A typical irrigating regimen involves a hand powered plastic syringe, 27 gauge or similar open ended (or possibly side vented) needle. Among many disadvantages, hand fatigue, increased risk of extrusion, lack of activation and control over solution flow are but several challenges of using cold, passive, and syringe-based irrigation. Significant changes have occurred to advance the armamentarium and materials available to its current specialist standard, many of which are described in this article.

As a starting place, it is important to define the objectives of canal disinfection. The ultimate goal of endodontic canal disinfection is the removal of all organic matter (e.g. pulp tissue), inorganic matter (e.g. dentinal shavings in the form of the smear layer and dentinal tubule content), bacteria, biofilm, and bacterial toxins, from the orifice to the minor constriction of the apical foramen. Based on the current literature, it is absolutely clear that no current method of canal disinfection can achieve a predictably sterile canal from orifice to apex including the dentinal tubules. Nevertheless, the endodontic literature is absolutely clear that cleaner canals optimize endodontic success rates in combination with a post endodontic coronal seal relative to less clean and poorly sealed root canal treated teeth.1-5

Before discussing irrigation materials and protocols, it is axiomatic that pre-operatively, the clinician appreciates all of the complexities of the canal anatomy being debrided through nickel titanium instrumentation using CBCT where necessary and multiple radiographic angulation. Excellent irrigation is dependent on adequate cleaning and shaping of these complex spaces and vice versa.

With the exception of the GentleWave™ system (Sonendo), which has a specific protocol unto itself, the effectiveness of the irrigation protocol is dependent on cleaning and shaping to create a space into which irrigants flow, which can be accentuated via irrigant activation. There are many excellent instrument systems for canal preparation including: Logic (Bassi Endo), Wave One (Dentsply), Protaper Gold (Dentsply) Edge Files (Edge Endo), Twisted Files and TF Adaptive (Kavo Kerr), Endo Sequence (Brasseler), etc. Regardless of the system used, excellent cleaning and shaping and preservation of tooth structure employ the following principles:

• Achievement of apical patency
• A rubber dam must be used
• Debris is produced at every stage in the access and shaping process, the resulting debris should be removed immediately in order to prevent apical debris propulsion; in essence, every insertion of a nickel titanium file should be paired with irrigation and recapitulation
• Optimally the procedure will be performed under the lighting and magnification of a surgical microscope6 achievement of apical patency (to prevent blockage of the apical third with canal debris)
• Preparation of an access size that allows unrestricted visual and tactile control yet does not remove tooth structure unnecessarily and/or predispose the tooth to subsequent fracture
• Location of all canals
• Keeping the canal in its original position
• Negotiation and preparation of the canal from orifice to apex to resemble a tapered funnel with narrowing cross-sectional diameters
• Maintenance of the apical constriction in its original size and position (to avoid and/or minimize irrigant extrusion)
• Preparation of a final taper and apical diameter that optimizes the flow and activation of irrigant and cone fit for obturation

Achievement of the above objectives is independent of any instrument system and are the foundational principles upon which excellent canal disinfection is dependent. In short, excellent shaping, disinfection, obturation, and coronal seal are all required to optimize clinical success.

• Using greater volumes of irrigants rather than lesser
• Exchanging irrigants frequently
• Heating irrigants
• Deeper needle penetration (without extrusion) with a side vented needle is favored over shallow penetration and/or open-ended needles (Figs. 3A-3C)
• Utilizing higher concentrations of irrigants within accepted clinical norms and biologically tolerated limits (for example, using 6% NaOCl instead of 0.5% NaOCl)
• Irrigating after the insertion of every nickel titanium and/or stainless-steel hand file placed into the canal
• Elimination of vapor lock (bubbles formed at the apex during standard irrigation protocols that prevent complete apical penetration)
• Activation of irrigants (described below) is preferable to passive non-active syringe irrigation
• During needle-based irrigation delivery, the needle should never be locked and/or irrigant never delivered under pressure; one ergonomic option for irrigant delivery, which improves tactile control and eliminates plastic syringes (and the resulting hand fatigue from their use) is the AutoSyringe (Vista), a cordless rechargeable device, which accepts any luer lock irrigating needle; the Auto Syringe extrudes irrigant at different flow rates (slow, medium, fast) at the touch of a button (Fig. 4). 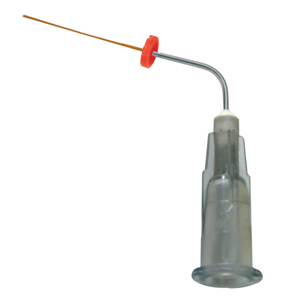 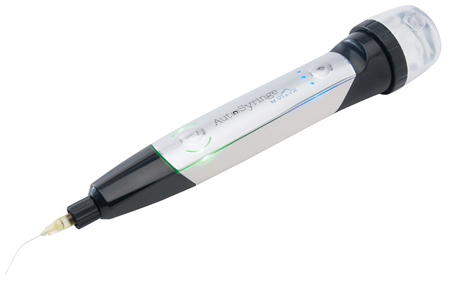 Solutions
The goals of canal disinfection mentioned above are achieved through concomitant use of a bactericidal and tissue dissolving irrigant (most commonly sodium hypochlorite, NaOCl, a chelator (EDTA) to remove the smear layer, and irrigant activation (defined below).

Standard household bleach, purchased off the shelf at a grocery store has been the universal standard and single agent irrigant for many decades. It has been used due to it’s high alkalinity giving it
powerful antibacterial activity against biofilms when activated and organic tissue dissolving capability. Household bleach is readily available, inexpensive and has an adequate shelf life. NaOCl also acts as a lubricant for files and provides flushing action to mechanically remove debris. Unfortunately, the manufacturing process and storage conditions of household bleach vary considerably. As a result, the final concentration (among other properties) is not consistent and/or standardized. This lack of standardization is exacerbated as NaOCl degrades over time and at elevated temperatures. Lastly, standard household bleach does not contain agents (surfactants) to decrease its surface tension and improve canal wall wetting.

Currently, within the marketplace there are options other than household bleach for a tissue dissolving bactericidal irrigant: Chlor-XTRA™ (Vista) and ChlorCid™ (Ultradent). Chlor-Xtra and ChlorCid Surf™ (Ultradent) have surfactants to lower their surface tension. Chlor-XTRA™, for example, is an enhanced 6% NaOCl solution. Relative to household bleach, in part, due to its surfactants, Chlor-XTRA™ offers greater canal wall wetting, oxidizing activity/tissue digestion and irrigant penetration7-12 (Fig. 5). 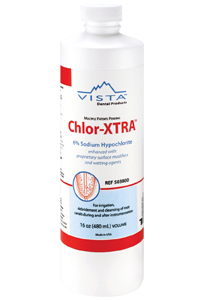 Smear Layer Removal
When hand and rotary instruments touch the root canal wall, a layer of smeared debris is produced on the canal walls which blocks the dentinal tubules. As a result, a chelator such as EDTA is required to dissolve the inorganic component of this smear layer to clear the wall and open up the dentinal tubules to allow disinfection by NaOCl.

EDTA is generally marketed as a 17-18% solution without additives. Two important products are exceptions to this rule: QMix™ (Dentsply) and SmearOFF (Vista). SmearOFF™ (like QMix™) removes the smear layer and provides a coincident bactericide (in the form of chlorhexidine, CHX). SmearOFF™ also includes surfactants to improve canal wall wetting13-14 (Figs. 6-9). 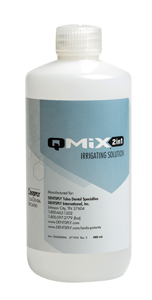 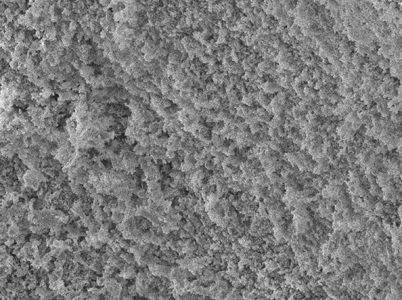 The layer of smeared debris on the canal wall with SmearOFF™ (image courtesy of Dr. Upendra Hoshing). 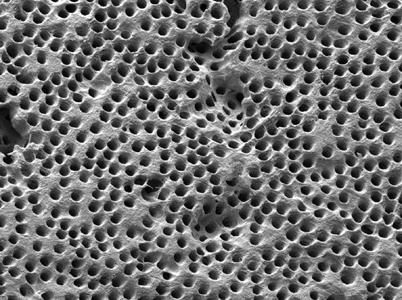 Precipitates typically form when CHX based solutions are mixed with, or used immediately following NaOCl solutions. This precipitate means that a saline or water rinsing step is required clinically if both solutions are going to be used in the same clinical case. By contrast, the proprietary chemistry of SmearOFF™ and Chlor-Xtra™ allow them to be utilized simultaneously as their combination does not form a precipitate and/or parachloraniline (PCA). No precipitate formation between SmearOFF™ and Chlor-Xtra™ eliminates a rinsing step and provides a clinician a two-step protocol that delivers EDTA, CHX and NaOCl (all with surfactants) in the same case. By contrast, the instructions-for-use for QMix™ state that all NaOCl must be rinsed out of the canals first before the QMix™ is inserted as a final irrigant necessitating an extra step. 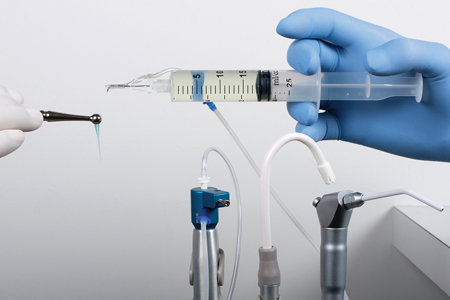 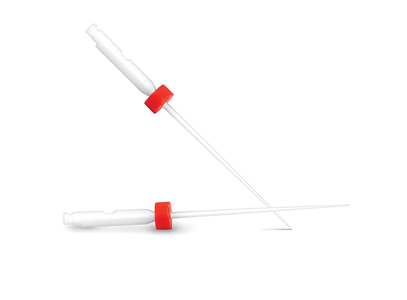 While a comprehensive discussion of all of the activation methods is beyond the scope of this paper, a short description of each technique is valuable to spark the interest of the reader to further investigation.

Ultrasonic activation, which features acoustic streaming and cavitation of intracanal irrigant, is a common clinical method with a scientific literature basis. There are many means to provide ultrasonic activation to irrigating solutions including the Irrisafe (Acteon), Irrisonic (Helse) and the EndoUltra™. The Irrisafe and Irrisonic are tips that fit on a piezoelectric unit and electromechanical energy is transmitted through the tip to the solution.15-17

Alternatively, EndoUltra™ is the only cordless activator unit capable of generating ultrasonic tip frequencies (~45,000 Hz). These methods of ultrasonic activation disrupt biofilm, reduce bacterial counts, remove vapor lock, and improve irrigant penetration. It is notable that none of these activation tips engage or remove dentin based on their activity and designs.

There are many commercial ultrasonic units, which are suitable for endodontic irrigant activation using the aforementioned tips, including ProUltra Piezo (Dentsply), P-6 (Bonart), and the Piezo Pilot (Vista), among others.

Negative pressure irrigation methods were commercialized by the introduction of the EndoVac™ (Kavo/Kerr). Simple in concept, irrigant is simultaneously expressed into the chamber and removed via either a macro or microcannula. Rather than inject irrigant down the canal, irrigant is pulled down the canal passively through the use of the operatory suction, virtually eliminating the risk of apical extrusion.

Mechanical means of irrigant activation are simple and relatively “low tech.” Both the Finishing File (Tun Ultrasonics) and the Bassi Clean device (Bassi Endo) fit onto the latch type connection of an endodontic handpiece and are rotated at speeds of approximately 1000 rpm or greater. The mechanical agitation caused by the rotation of these devices create vortices, heat irrigants, and move them into otherwise untouched canal anatomy.

Multisonic and negative to neutral pressure irrigation is commercially available in the form of GentleWave™ (Sonendo). One of the authors (DM) is a Sonendo user. The GentleWave™ system features a console, which delivers sodium hypochlorite and EDTA to the tooth via a closed system. The closed system is created by a handpiece, which is sealed over the access. Once energized, over a period of approximately 8 minutes, the irrigants are sequentially inserted and evacuated from the tooth.18-20

GentleWave™, while supported by the literature as highly effective, is valued at a premium. Consoles cost approximately $80,000 and each handpiece is approximately $50-$100 per tooth depending on purchase volume. The handpiece is single use (Fig. 13). 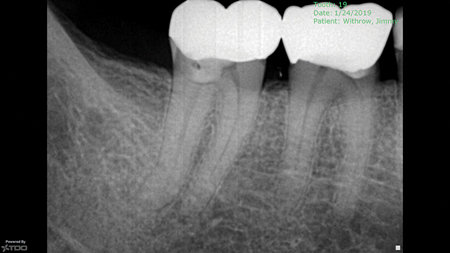 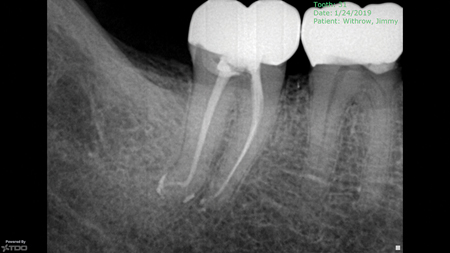 Because no research has been published yet, it is unknown exactly what the qualitative and quantitative difference in cleanliness is between a case cleaned by GentleWave (using standard bleach and EDTA) versus EndoUltra™, Chlor-Xtra™ and SmearOFF™ among many other similar comparisons.

And finally, the use of photon induced photoacoustic streaming using Er:YAG laser energy (PIPS™) is another possible means to activate irrigation. Laser energy in the confined environment of the canal system produces high-speed fluid streaming and cavitation. The net effect is a significant enhancement of the effectiveness of bactericidal and smear layer removal potential.

Despite the above activation methods, solution attributes, and delivery systems, no single known irrigation method can produce a sterile canal, especially in the presence of significant biofilm. As a result, the clinician is left to interpret the literature carefully and decide which of the aforementioned materials and protocols provide optimal disinfection in their hands. For author DM, for the majority of cases, that technique is GentleWave™. For author RM, that technique is Chlor-Xtra and SmearOFF delivered using the AutoSyringe™ and activated by EndoUltra™.

This article has presented for the general practitioner, a rationale for irrigation that is literature based and clinically relevant. Emphasis has been placed on the order of irrigating solutions placement, rationale and specific solutions and activations methods. We welcome your feedback.

Dr. David McCarty is an endodontist in private practice in Colorado Springs, CO. He is an avid GentleWave user. He has no financial interest in any of the products mentioned in this article.

Dr. Richard Mounce practices in Eagle River, AK. He has lectured globally and is widely published.