Epistaxis (nasal bleeding) is a relatively common complication that may arise during a dental visit that utilizes sedation/anesthesia. While rarely fatal, appropriate and prompt management of peri-operative epistaxis is critical in order to prevent further harm. This article will discuss a case report of epistaxis encountered during dentistry under deep sedation. In addition, the anatomy, types, potential causes, and management strategies of peri-operative nose bleeds will be reviewed.

We are reporting the case of a 34-year-old female patient who was scheduled for dental extractions under deep sedation. The anesthetic plan involved total-intravenous anesthesia (TIVA) at a deep sedation level in a procedural team model (PTA). Planned airway management included oxygen supplementation with a nasal hood and guarded airway technique using an oropharyngeal gauze pack and nasal pharyngeal tube (NPT). The patient’s medical history was significant for diabetes, schizophrenia, gastroesophageal reflux disorder, hypothyroidism, obstructive sleep apnea and history of heavy menstrual bleeding. Shortly after an uneventful induction, an NPT was placed in one of the patient’s nares to stent open the airway and to facilitate adequate ventilation. After placement of a throat pack, bleeding was observed from the right nostril (the one with the NPT). Constant pressure was applied with a piece of gauze and the throat pack was removed to allow suctioning of the oropharynx. A decision was made to leave the NPT in place to provide a tamponade effect to help prevent continued bleeding. The bleeding was seemingly controlled, and local anesthetic was administered. Just before beginning treatment, the hemorrhaging recurred with greater intensity than before. After nearly 30 minutes of applying pressure and suctioning, hemostasis could not be achieved, so the case was aborted. After the patient’s protective reflexes had returned, the NPT was removed. Bound to the tip of the NPT was a large liver clot. Liver clots are jelly-like clots that are rich in hemoglobin and erythrocytes and are characterized by continuous slow, oozing hemorrhaging.1 Immediately a 4×4 piece of gauze was rolled into a cylinder, soaked with aluminum chloride and inserted into the patient’s right nostril. Floss was tied around the gauze to allow for easy retrieval. Pressure was applied again for 10 minutes and this time the bleeding ceased.

Epistaxis occurs predominately in children and older adults (45-65 years). Up to 60% of people experience epistaxis in their lifetime, with 6% requiring medical management.2 Due to its function of warming and humidifying air, the nasal cavity is highly vascularized with arteries arising from both the internal and external carotid.3 Broadly, the area above the middle turbinate is supplied by anterior and posterior ethmoidal arteries, which are branches of the internal carotid. The remaining areas are supplied by various branches of the external carotid, including the superior labial branch (of the facial artery), the greater palatine artery and the sphenopalatine artery.4 Epistaxis may be categorized into anterior or posterior, and less frequently as superior or inferior depending on the blood supply. Anterior nosebleeds develop from the anastomoses of various branches, called Kiesselbach’s plexus (Figure 1). This plexus is situated along the anterior septum in Little’s area and produces 90% of nasal bleeding. Posterior bleeding results from branches of the sphenopalatine artery (posterior nasal artery) which form a part of Woodruff’s plexus. Posterior bleeds are less common and more challenging to manage.5 Fortunately, based on the pattern of bleeding the aforementioned case was determined to be an anterior nosebleed. 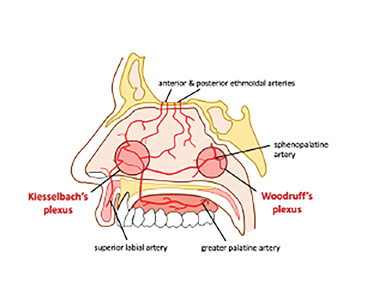 Arterial supply of the septum of the nasal cavity. 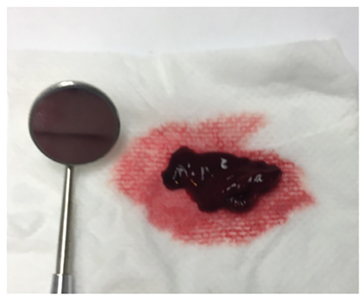 As described, the initial management for nasal bleeding should involve direct pressure for at least five minutes.8 Positioning the patient forward and confirming hemodynamic stability and airway patency is critical. Bleeding that does not respond to compression and nasal plugging should be examined with appropriate lighting and suctioning to determine the source of the bleed. Alternative management strategies for anterior nose bleeds include nasal packing soaked in epinephrine (e.g. local anesthetic with 1:50,000 epinephrine) or oxymetazoline spray, chemicals (e.g. silver nitrate) or electrocautery and balloon catheter.9 Posterior nose bleeds are considerably more difficult to control and often refractory to common management techniques. Treatment is often carried out in a hospital and consists of selective ligation of the offending artery. An alternative method is insertion of a balloon catheter into the nasopharynx via the nostrils.5

Although usually benign, frequent or prolonged epistaxis that is refractory to treatment may signal an underlying condition. Therefore, referral to the primary care physician or hospital is necessary, especially in elderly patients and patients with potential posterior bleeds or coagulopathies.2 Patients with complicating comorbidities such as coronary artery disease, severe hypertension and anemia may also require admission.

While dentists are proficient at managing oral bleeding, the nasal cavity is also a potential source of peri-operative hemorrhaging. Differentiating between anterior and posterior epistaxis, and prompt management with resources readily available in the dental operatory is an important skillset that all dentists should possess. Most importantly, a comprehensive medical history, noting histories of prolonged bleeding as well as previous medical management for bleeding is crucial in preventing these challenging scenarios altogether.

Dr. Sina Moshiri is currently a first year dental anesthesia resident at the Faculty of Dentistry at the University of Toronto.

Cameron Goertzen is a current University of Toronto dental anesthesia resident and a University of Toronto DDS graduate. Cameron has a diverse background in research and has published articles in the fields of breast cancer and oral cancer. During his free time, Cameron enjoys playing hockey, cooking/baking, and hiking. Cameron is from Niagara-On-the-Lake and along with his wife, Erin Goertzen, a 1st year pediatric dental resident also at the University of Toronto, hope to practice together following their studies.

Weekly Wisdom: How to Thrive in Your Newly Purchased Practice