Polycystic Ovarian Syndrome and Periodontal Disease: Is There a Link?

What is Polycystic Ovarian Syndrome (PCOS)?
When young women experience infrequent or irregular menstrual cycles, it is quite common for them to receive a diagnosis of PCOS from their physician. PCOS affects 4-21% of reproductive age women and is the leading cause of anovulatory infertility.1,2 The most commonly used diagnostic criteria states that women with PCOS must present with two of the following: oligo- or amenorrhea, hyperandrogenism, and/or polycystic ovaries as seen by ultrasound.3 Since PCOS is a syndrome, or group of symptoms, several phenotypes exist depending on which combination of symptoms are present. PCOS is largely a result of increased production and circulation of androgens. Normally, androgens are converted to estrogen in the ovaries. This process is regulated by luteinizing hormone and follicle stimulating hormone, hormones that stimulate the ovaries and regulate menstrual cycles – however, disruption of female sex hormones, as seen with PCOS, can cause infertility and symptoms including ovarian cysts, menstrual irregularities, hirsutism, acne, and male-pattern baldness.3-5 While PCOS has previously been considered a reproductive disorder, it may also be considered an endocrine disorder due to some of its key metabolic components. Insulin resistance is a common feature of PCOS and can result in compensatory hyperinsulinemia. As a result, women with PCOS appear to be at an increased risk of obesity and metabolic syndrome as well as other chronic diseases. PCOS has also been associated with an increased number of risk factors for cardiovascular disease and an increased risk of diabetes, obesity and cancer.1,6 Additionally, an increased risk of periodontal disease has also been associated with PCOS. Of note, women with PCOS may have several common risk factors for periodontal disease (Table 1).

Women with Polycystic Ovarian Syndrome May Have Several Common Risk Factors for Periodontal Disease. (Young HE & Ward WE, 2020, unpublished).
Bold text denotes features that are both complications of polycystic ovarian syndrome and risk factors for periodontal disease.

Metabolic disruption in PCOS refers to the hormonal imbalances and altered metabolic pathways contributing to insulin resistance and hyperinsulinemia which also contribute to hyperandrogenism in PCOS.7 Low-grade chronic inflammation is closely tied to metabolic disruption, and both may contribute to increased periodontal disease risk.6,8 Several studies reported positive correlations between inflammatory markers (tumor necrosis factor alpha, interleukin (IL)-17A, C-reactive protein, and IL-6) and periodontal parameters (bleeding on probing, plaque index, and probing depth) in women with PCOS.6 While these relationships are not fully understood, it has been suggested that insulin resistance, which contributes to low-grade chronic inflammation in PCOS and periodontal disease, may be the linking factor. There is some evidence to demonstrate that PCOS and periodontal disease share a bi-directional relationship based on studies analyzing levels of serum and salivary inflammatory markers in both conditions. (Fig. 1) Thus, maintaining periodontal health may benefit the management of PCOS symptoms. 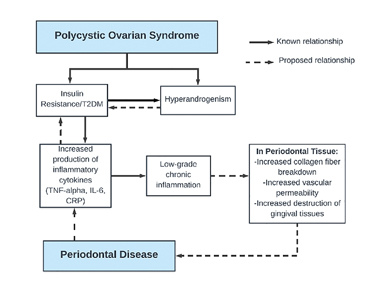 Proposed Factors Linking Polycystic Ovarian Syndrome and Periodontal Disease: Evidence suggests
polycystic ovarian syndrome (PCOS), which can contribute to insulin resistance; type II diabetes; and hyperandrogenism, can also cause low-grade chronic inflammation through increased production of
inflammatory cytokines. This could have direct effects on periodontal tissue and lead to periodontal disease.
(Young HE & Ward WE, 2020, unpublished).

Furthermore, elevated levels of female sex hormones have previously been linked to periodontal disease, particularly during pregnancy, puberty, and with use of first-generation oral contraceptives that contained high doses of estrogen.9-11

Guidance for Patients
An important message for women with PCOS and periodontal disease is that managing their PCOS may help prevent periodontal disease development and progression. Given that women with PCOS are at increased risk of obesity, insulin resistance and type II diabetes – all risk factors for periodontal disease – preventing and managing these conditions can improve their oral health as well as their overall health. Reinforcing the idea that oral health and overall health are interconnected may be a good place to start, and the following points can guide your patients:

There are several resources that may be helpful when learning about PCOS or referring your patients to materials. Firstly, we recommend referring to the International evidence-based guideline for the assessment and management of polycystic ovary syndrome.1 Additionally, the following webpages are recommended:

Hannah Young holds a BKin from the University of the Fraser Valley and is currently a MSc candidate in the Faculty of Applied Health Sciences at Brock University. Hannah’s research focuses on women’s health and periodontal disease for which she was awarded an Ontario Graduate Scholarship.

Wendy Ward is a Professor and Canada Research Chair in the Department of Kinesiology in the Faculty of Applied Health Sciences at Brock University. Her team’s overall research goal within the Nutrition, Bone and Oral Health Research Group is to develop dietary strategies that help protect against osteoporosis and related fractures while also understanding the complex relationships with other health conditions such as periodontal disease. 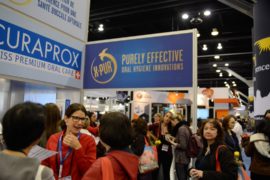