The Implant Retained Overdenture and Its Cost-Effectiveness

Only a small percentage of implant candidates have received treatment.3 Even though decay rates are dropping, in real numbers, people with one or both fully edentulous arches will actually increase from 37.2 million to 41.7 million by 2020 in North America.4

However, the cost of treatment is a barrier to many who could benefit. Further, denture wearers are frequently older and economically disadvantaged.5 To improve the cost/ benefit relationship for these patients clinicians can use a one-surgery system to reduce the number of steps and select an implant system which have a small number of parts.

The four cases below are examples of overdenture retention using a one-surgery, one-piece implant system. No bars are used. Bars add to complexity and costs and have no demonstrated benefits over the simpler ball retention in the mandible.6

The single, midsymphyseal implant overdenture is an economical therapeutic alternative to the conventional mandibular complete denture. One study reports successful treatment of octogenarian patients using this approach (Figs. 1a & 1b).7

However, the first-choice standard of care is the mandibular 2-implant overdenture (Figs. 2a & 2b).1

The 3-implant overdenture provides slightly more retention but the major benefit is the “over engineering”. It leaves the patient with good support in the rare event of the failure of one implant (Figs. 3a & 3b).

The 4-implant overdenture provides for conversion to a future fixed restoration should the patient ever want one at some future time (Figs. 4a & 4b).

It is instructive to compare the preceding four cases to the five implant, fixed/retrievable prosthesis; the grandfather of them all (Figs. 5a & 5b).

Developed by Branemark and his team in Sweden 30 years ago8 and reproduced by Zarb and his team in Toronto,9 this approach put implant treatment on a solid scientific basis.

The clinicians and the laboratory technicians involved had to deal with 55 components! The fees were equal to the average annual income of the Canadian senior citizen!

In 2002 in Montreal, Quebec, the McGill consensus statement on overdentures concluded that the mandibular 2 implant overdenture is the first-choice standard of care for edentulous patients.1

Patient satisfaction is equal to the more complicated original Brnemark treatment. The science is also equal. With most systems today, the clinician has to manage only 10 components or less instead of the original 55. This makes the treatment cost/ effective and efficient for both patients and clinicians.

When the treatment team aligns its interests with those of its patients we have social responsibility at its best.

Dr. M. Somborac is a shareholder in Tenax Implant Inc. 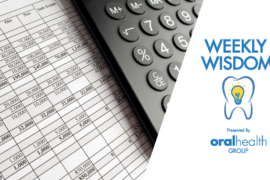