Remember a few years back, when a new regulation came into effect that required us to ask our patients for a piece of ID when we wanted to prescribe something as common as Tylenol #3? Personally, I thought, “Oh sure, bring on more rules and restrictions!” Actually, it forced me away from prescribing opioids and instead to look for alternative non-opioid drugs and natural non-pharmaceutical options, such as photo-bio-modulation (PBM) to help my patients deal with pain. Of course, there are many different levels of pain, some may be acute, while others are chronic. One cannot compare discomfort following a restorative procedure to something as involved as a wisdom tooth extraction or orthognathic jaw surgery.

Over the last couple of years, we have all heard with increasing urgency about the dreaded “Opioid Crisis” sweeping across Canada (Fig. 1). A steadily increasing and alarming number of reported deaths due to Fentanyl overdoses and related substances (Table A), has been affecting teens and younger adults. It makes its way into news-radio during our drive to work, then again on the TV news when we made our way home. We may believe, and mistakenly so, that doesn’t involve us, nor could we be the cause, as we teach our kids that drugs are bad and we don’t prescribe heavy duty narcotics at the office, unless absolutely necessary. A recent article in JAMA suggests that adolescents who fill their first opioid prescription after wisdom teeth extraction are twice as likely to continue taking opioids weeks, even months after the surgery. Unfortunately, parents are often not as well-informed as they suspect they are, as only 37% will ask about alternatives to opioids to treat post-operative pain, 52% are aware that opioids are not safe and could lead to addiction, and 64% believe that opioids are more effective than alternative medications, such as NSAIDs. On average, oral surgeons and general dentists prescribe 20 opioid pills following complicated extractions, with Hydrocodone and Oxycodone being the most common, where the magic number should be 10-12. Educating parents about the effectiveness of Ibuprofen 400-600 mg alone, or combining with Acetaminophen 500mg, in the treatment of post-operative pain, is as important as providing safe disposal for unused opioids at a pharmacy. NSAIDs should be the primary analgesics of choice to treat moderate dental pain and opioids, such as Percocet and Vicodin, should be secondary to a maximum of 10-12 pills (Elliot Hersh, DMD, PhD, from Penn Dental Medicine).6 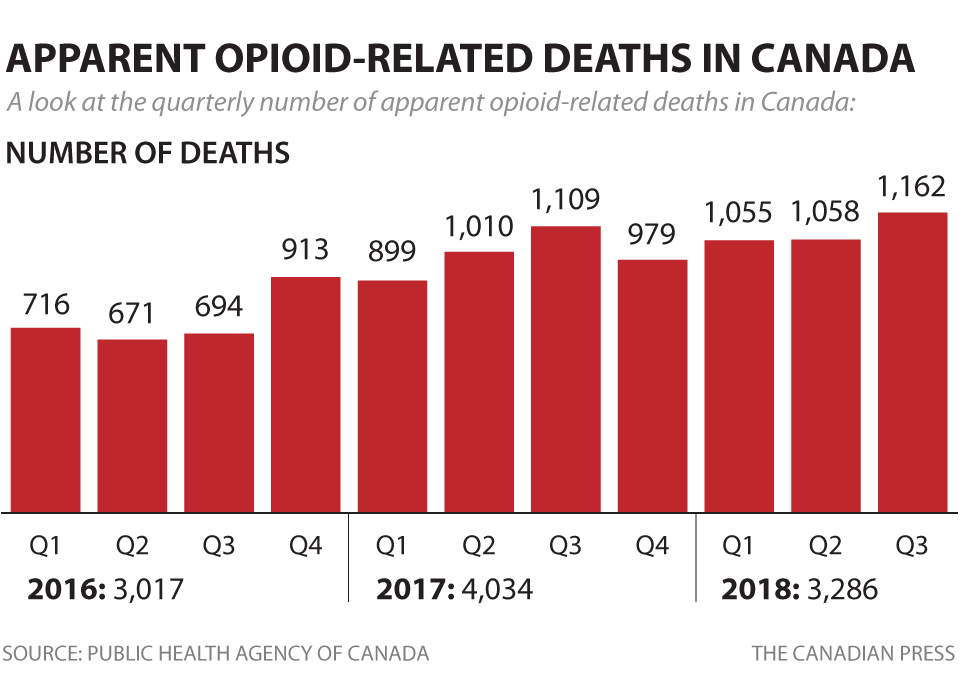 The number of opioid-related deaths is increasing in Canada. 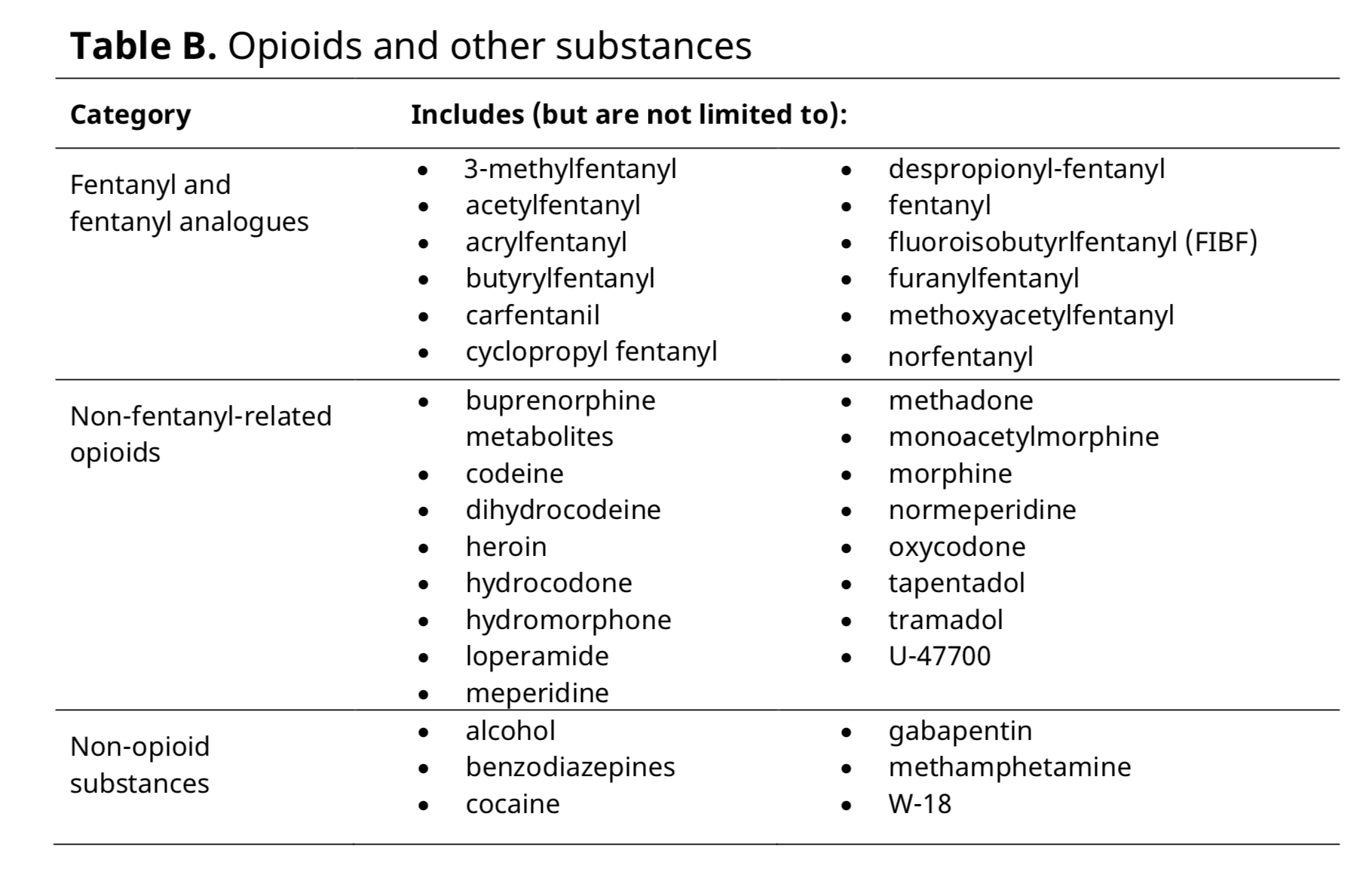 Opioids and other substances.

A Story of Dr. X
I would like to share a story with you, one which made me realize that this crisis is closer to all of us, than we may think. This personal tragedy was shared with me by a dear colleague, whom, for many reasons prefers to remain anonymous – I will call him Dr. X. His son was an amazing athlete, captain of the football team and an all-star baseball player. While playing in league football, at the age of 38, he suffered a knee injury which required surgery. The surgeon gave him a script for 100 Vicodin for post-op pain. The surgery never stopped the pain and every time Dr. X’s son went back to the surgeon, he was told that the knee looked fine and just to give it more time, followed by another refill for Vicodin. After four repeats of 100 Vicodin each, the pain continued unabated, and in fact, it was so tremendous, that at times he could barely walk and would need a cane to walk from the subway to work. With another doctor came another opinion, but with the same result – more Vicodin pills. Dr. X was not aware of his son’s struggle because they lived in separate cities and only spoke on the phone weekly. His son only mentioned his struggles which he was having with the pain in his knee a week before he died. By then he was addicted to Vicodin, stopped working and was now gambling. By this time, he lost his family’s money, he was three months late on car payments, and their condo was about to get repossessed. Dr. X’s son killed himself, in March 2019, by jumping off George Washington Bridge. He left behind a wife, a 4-year-old son and a 10-month old daughter.

Dr. X loves and misses his son every day and wishes that he would have known about his son’s battle with pain and Vicodin addiction sooner, so he could have helped him deal with the pain by finding alternative treatments. 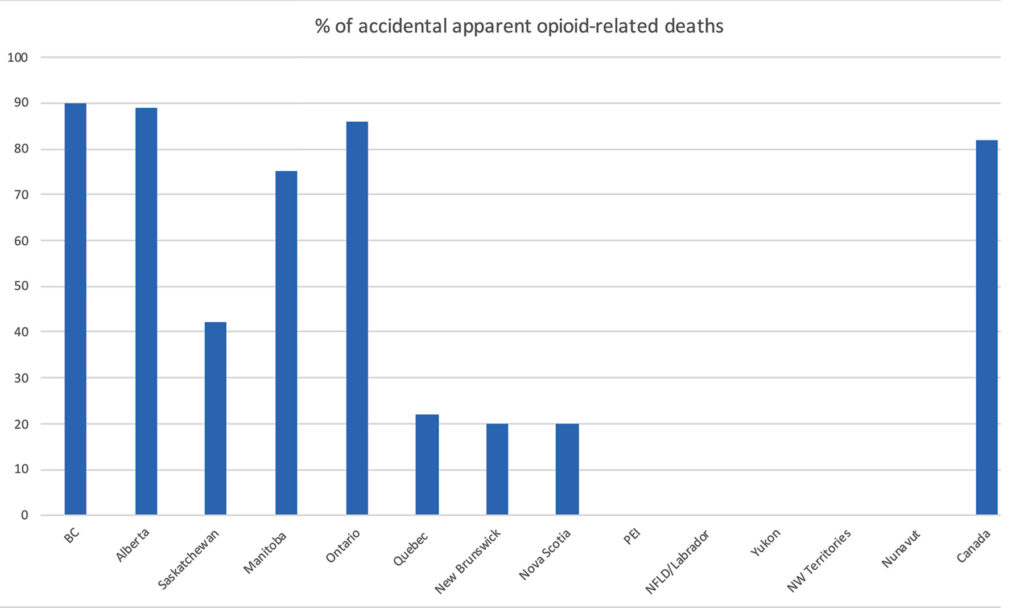 Distribution of Opioid-related deaths by province in 2019.

It is no secret that the political willpower of countries tackles the crisis in different ways. Our American neighbor to the south, President Trump plans to focus on punishment of major drug traffickers with death penalty, prevention and education through advertisement and helping those fighting with addiction to find jobs. Recently, 6 billion dollars was given to the US congress to fight the opioid epidemic. One aspect, the Safer Prescribing Plan, is supposed to cut opioid prescription fills by a third within the next three years. The US is also planning on increasing, further still, its ability to guard against the entry of dangerous drugs into the country through increased surveillance and enforcement at all borders, whether by sea, land or air against smuggling.2

Portugal, Europe’s heroine capital, however, has taken a different approach to their fight with drug addiction, which thankfully has proven very successful: 40 publicly funded gymnasiums house more than 4,000 addicts, free of charge. Here, they were given art therapy classes in ceramics, sculptures and paintings. Playing ball and other types of physical activities make them feel good and capable. The addicts are treated as patients, not criminals. In 1999, about 100,000 people, or 1% of Portugal’s population was addicted to heroin. These numbers have now dropped by half, and deaths are down to just 30/year. 90% of public money is allocated to health care for the addicted, while only 10% is for police enforcement.3

In Canada, however, 70% of the public money spent for combatting drugs is directed towards police enforcement. To quote the Canadian Minister of Health, Ginette Petitpas Taylor, “The Government of Canada continues to take action to address this crisis. Budget 2019 proposes additional funding of $30.5 million over five years, with $1 million in ongoing funding, for targeted measures to address persistent gaps in harm reduction and treatment. We will continue to examine all available evidence to inform our future actions and ultimately save lives.”4

The FDA is currently working on the considerations for benefit-risk assessment of the prescription practices of opioid analgesic drugs.5 Among the recommendations is that:

1. Class-wide risk evaluation and mitigation strategy (REMS) is necessary for all opioid analgesic drugs intended for outpatient use to ensure that the benefits of these drugs continue to outweigh the risk. The Opioid Analgesic REMS program requires that training be made available to all health care providers who are involved in the management of patients with pain.

2. Positive and negative public health effects of the drug must be considered, which includes the drug’s potential effect on risks to both patients and nonpatients, such as members of the patient’s household (children, teenagers, visitors, and others). The risks considered include those related to misuse, abuse, opioid use disorder, accidental exposure and overdose.

We, as dentists, must take care of our patients by first providing treatment in such a way as to minimize possible post-operative pain and, second, to manage the pain with appropriate measures to make the patients comfortable while, at the same time, not exposing them to possible addictive substances.6 We must consider proper diagnosis of the source of pain, as in the article by Dr. Sherif Elsaraj, other non-pharmaceutical methods to manage pain and improve healing, as sourced in the article by Annette Quinn, R.N., and of course, follow the current prescription guidelines outlined in the article of Dr. Aviv Ouanounou.

Marina Polonsky graduated from the University of Toronto with the Dean’s Gold Medal of Achievement, and is a member of Omega Kappa Upsilon Honour Dental Society and Alpha Omega International Dental Fraternity. Since 1999, Dr. Polonsky maintains a private general practice in Ottawa, Canada, with focus on multi-disciplinary treatment utilizing lasers of different wavelengths. Dr. Polonsky holds a Mastership with WCLI (World Clinical Laser and Imaging) Institute, Mastership in Diode and Erbium lasers from AALZ (Aachen Dental Laser Center), Master of Science in Lasers in Dentistry degree from RWTH University in Aachen, Germany. She holds Advanced Proficiency Certificate and Mastership Certificate with ALD (Academy of Laser Dentistry) and is a recognized member of the ALD Speaker Bureau. She is a founder of the Canadian Dental Laser Institute (CDLI). She is a KOL and a Clinical Mentor for Biolase Technologies Inc. and has been involved in the development of the newest all-tissue laser system, Waterlase Express. Dr. Polonsky is the author of multiple scientific papers, reviews and case reports on the uses of lasers in dentistry, she serves on the editorial advisory boards for JLAD (Journal of Laser-Assisted Dentistry) and LIDS (Lasers in Dental Science) by Springer.

RELATED ARTICLE: Codeine: Are We Prescribing the Right Opioid to Our Patients?