Introduction
One of the deﬁning attributes of an astute endodontist is the ability to successfully treat refractory endodontic disease. Refractory disease is deﬁned as disease that is recalcitrant, unresponsive, stubborn, unmanageable or resistant to treatment or cure. While the pathogenesis of refractory endodontic disease is not clearly comprehended, it is highly likely that microbiological and host immune influences play an important role. Unsuccessful endodontic outcomes are often attributed to persistent infection perpetuated by entombed bacteria or by reinfection of a previously disinfected root canal system, commonly via coronal leakage or tooth fracture. Extra-radicular causes are less common and include periapical actinomycosis, cholesterol crystals, foreign body reactions, unresolved cystic lesions and extra-radicular bioﬁlm and usually require surgical intervention or extraction of the tooth.

Refractory Endodontic Disease
Below is an example of such a clinical case (Fig. 1). It was posted online by an endodontist and is presented with his authorization. It involves retreatment of a lower right ﬁrst molar tooth with a diagnosis of symptomatic apical periodontitis. Periodontal probing measurements were normal with no evidence of a tooth fracture. A CBCT was taken but it was not posted. The treatment followed a standard endodontic protocol with long-term application of calcium hydroxide that was reapplied twice over a period of seven months. As the patient’s symptoms improved somewhat, the canals were obturated and the tooth restored. A week later the tooth was extracted due to persistence of symptoms!

Although the etiology of the failed treatment and inability to resolve symptoms was never ascertained, a strong possibility is that the protocol used was ineffective in reducing sufﬁciently the bioburden within the tooth. Lower molars are known to have a complicated root canal system, especially in the mesial root (Fig. 2) and current instrumentation and irrigation techniques fall short of adequately addressing this anatomy. 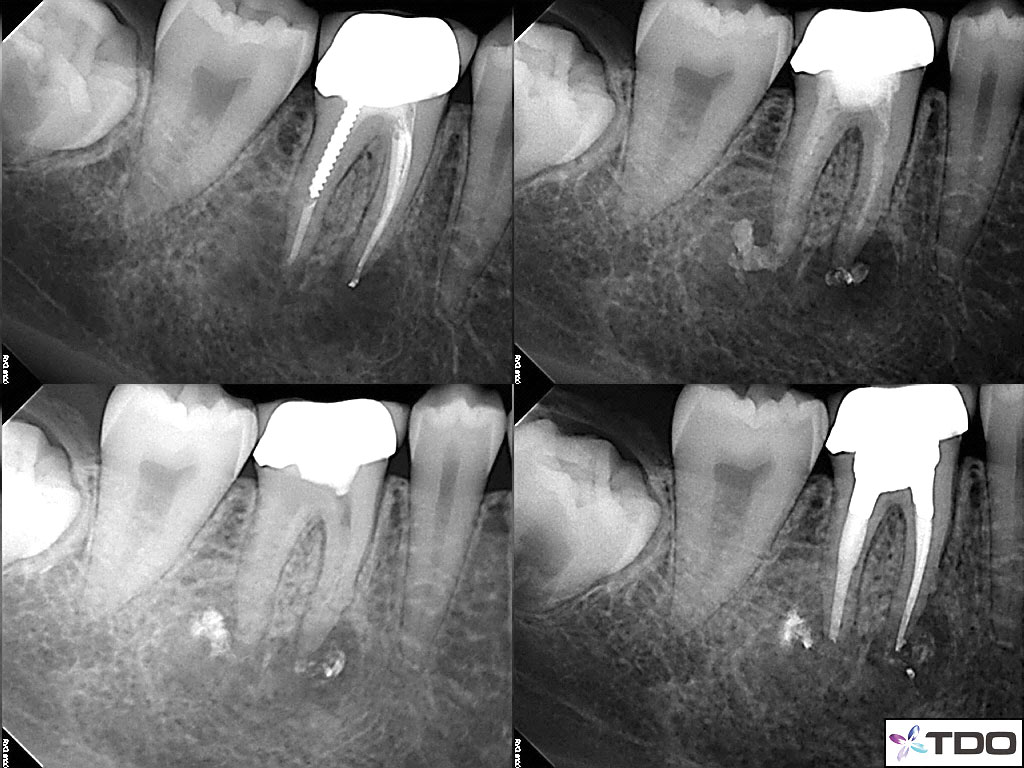 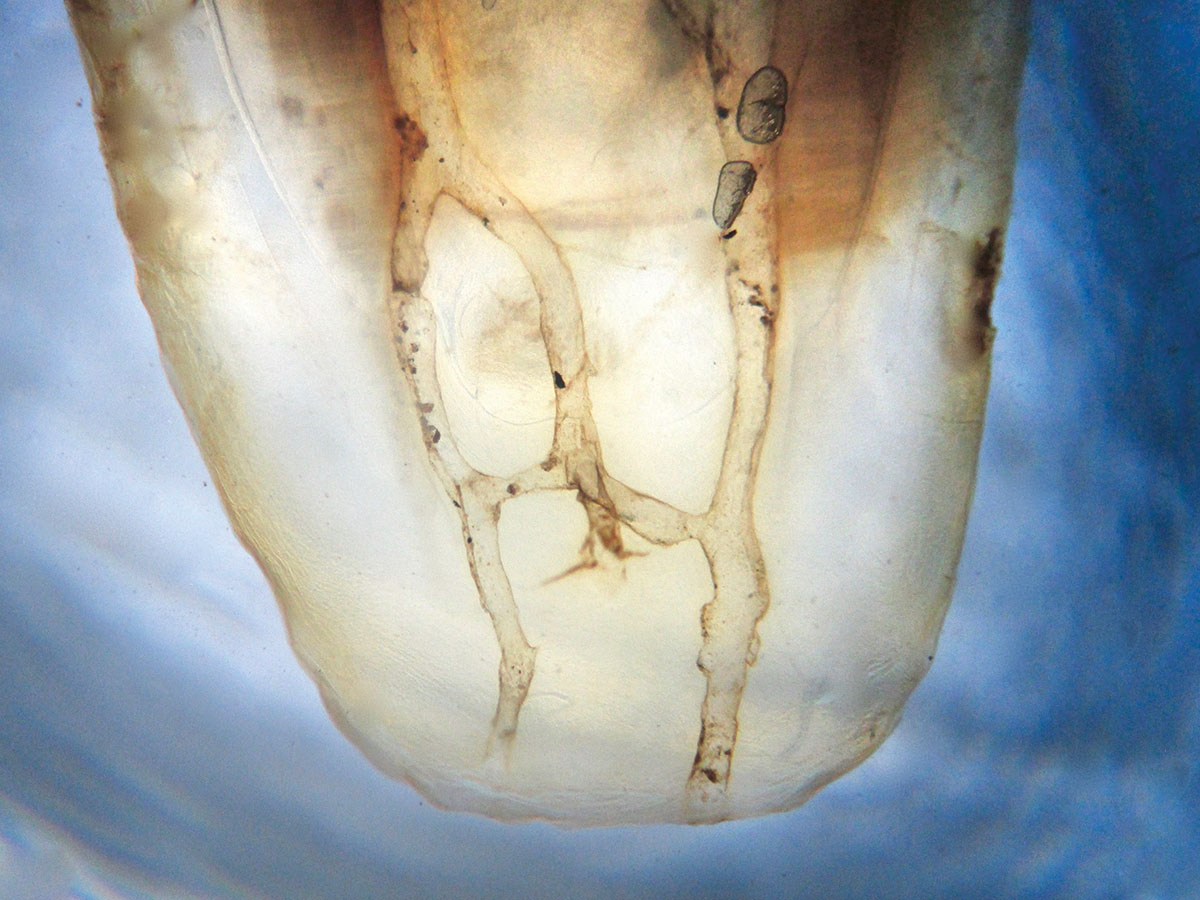 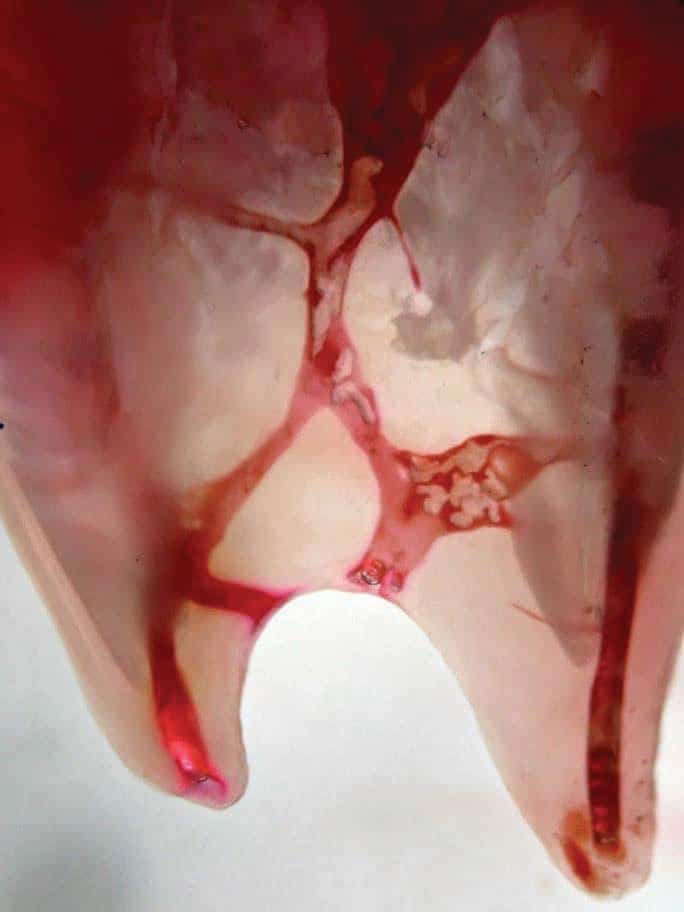 Case Report #1
The patient was a 58-year-old male dentist with a history of thyroid cancer. He had been diagnosed with recurrent endodontic disease in his lower right second molar. Retreatment was initiated by his endodontist. He presented in my ofﬁce complaining of pain to percussion in the tooth. He had seen his endodontist multiple times over a period of several months with no improvement in his symptoms. Occlusion was light on the tooth. Periodontal probing depths were normal and trans-illumination showed no signs of a tooth fracture. A diagnosis of symptomatic apical periodontitis was made. The CBCT scan (Fig. 3) showed no evidence of untreated root canal anatomy or root fracture.

Under local anesthesia, the tooth (Fig. 4) was treated with the Radial Apical Cleansing (RAC) protocol and re-medicated with calcium hydroxide paste. A prescription for Amoxicillin 500mg TID for seven days was prescribed. At the second visit three weeks later, the tooth was asymptomatic and was obturated with a bioceramic sealer and single cone gutta percha technique (EndoSequence® BC Sealer and Points™, Brasseler, USA). At his one and a half year follow up, the tooth was functional and asymptomatic with normal probing and radiographic evidence of complete healing. The tooth had not yet been permanently restored. 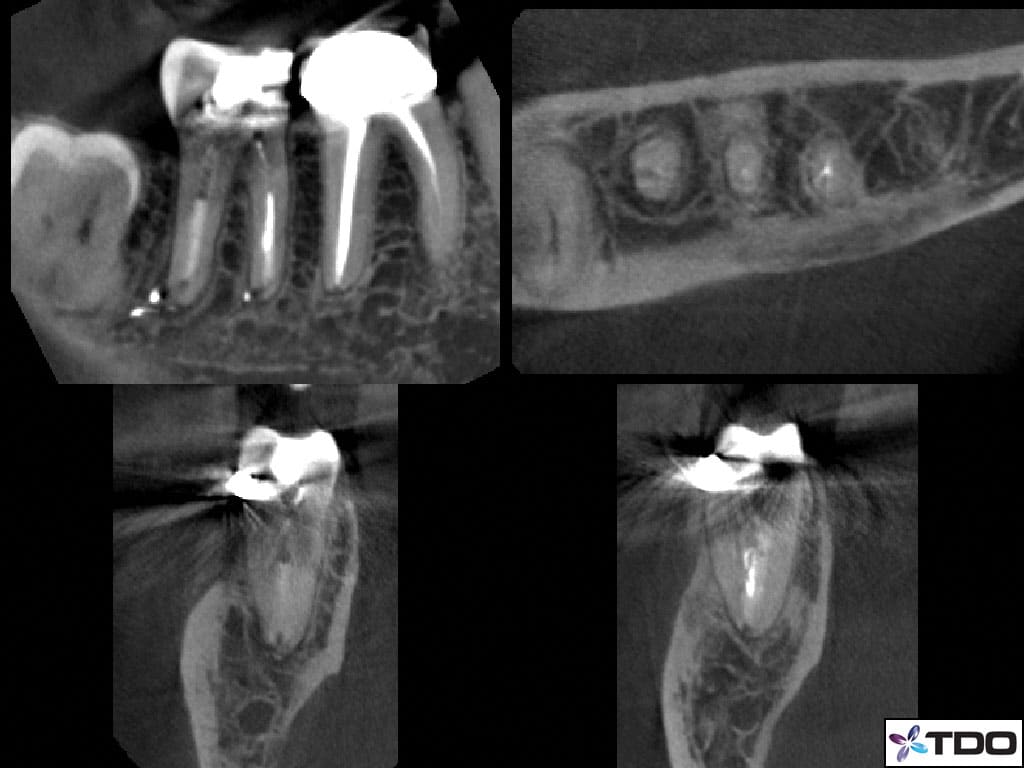 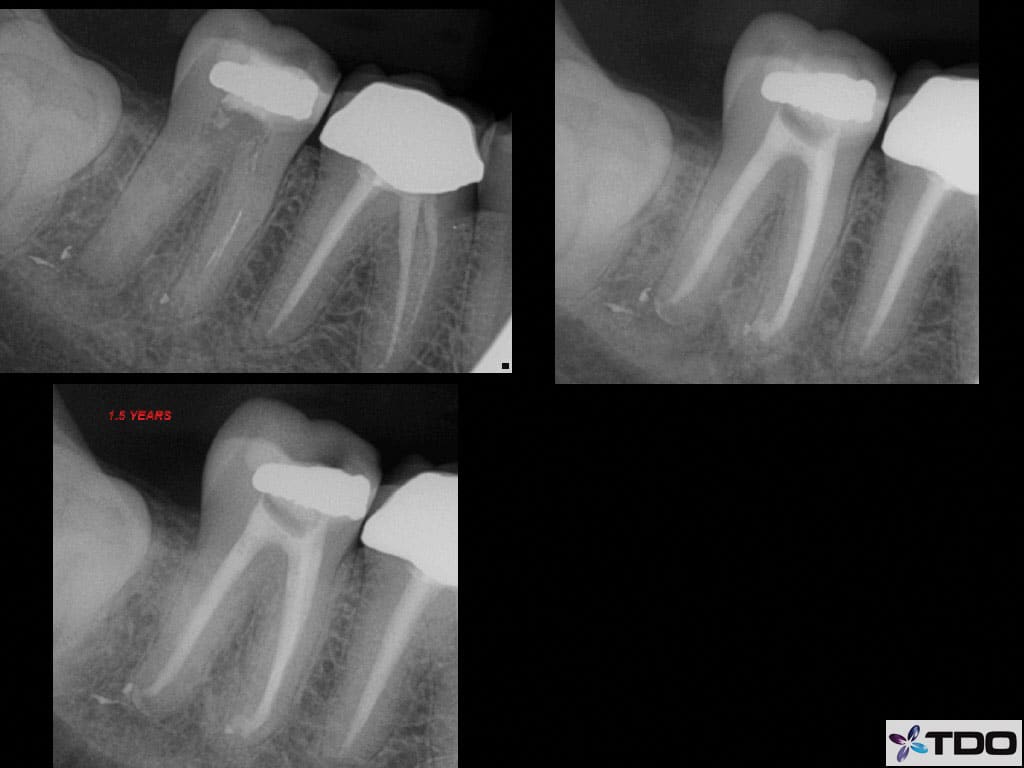 Case Report #2
A 77-year-old female patient presented with pain and swelling associated with her lower left ﬁrst molar tooth. She had previously been treated by two endodontists who were unable to relieve her symptoms (Fig. 5).

Examination revealed swelling in the adjacent buccal fold and the tooth was percussion sensitive. Periodontal probing was normal except for a narrow 7 mm pocket on the buccal aspect of the mesial root. Trans-illumination showed no signs of a cracked tooth. Radiographic examination showed a J-shaped radiolucency on the mesial root and a smaller apical radiolucency on the distal root. The CBCT scan (Fig. 6) conﬁrmed the extent of the ﬁndings as well as evidence of loss of buccal plate on the distal root. A diagnosis was made of symptomatic apical periodontitis with a buccal draining sinus along the periodontal ligament space.

Under local anesthesia, the tooth was treated with the Radial Apical Cleansing (RAC) protocol and re-medicated with calcium hydroxide paste (Fig. 7). The patient was prescribed Amoxicillin 500 mg TID for seven days. At the second visit, three weeks later, the tooth was asymptomatic and was obturated with a bioceramic sealer and single-cone gutta percha technique (Endo-Sequence® BC Sealer and Points™, Brasseler, USA).

At recall, nine months later, probing depths were normal and the tooth was functional and asymptomatic with evidence of osseous healing. 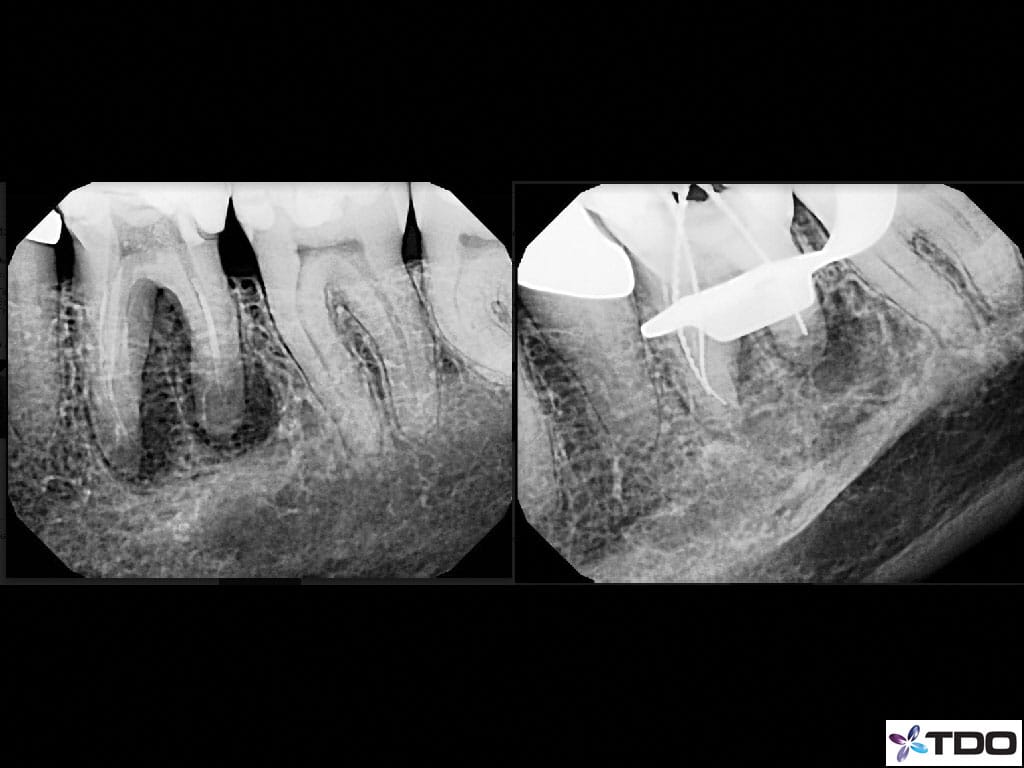 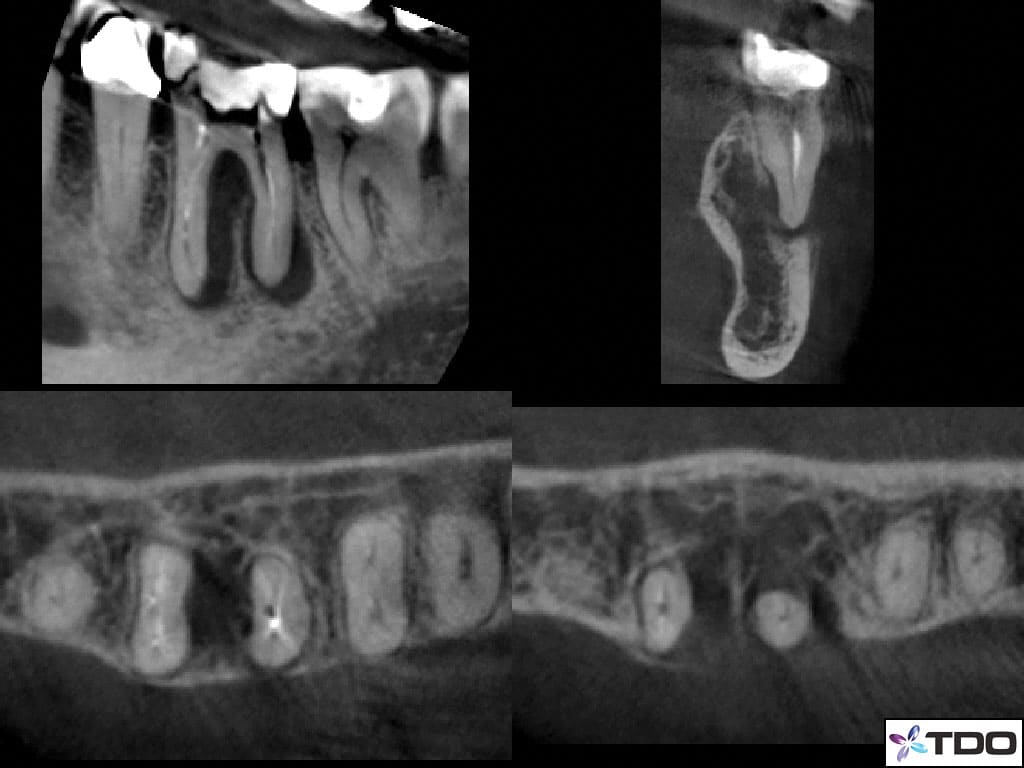 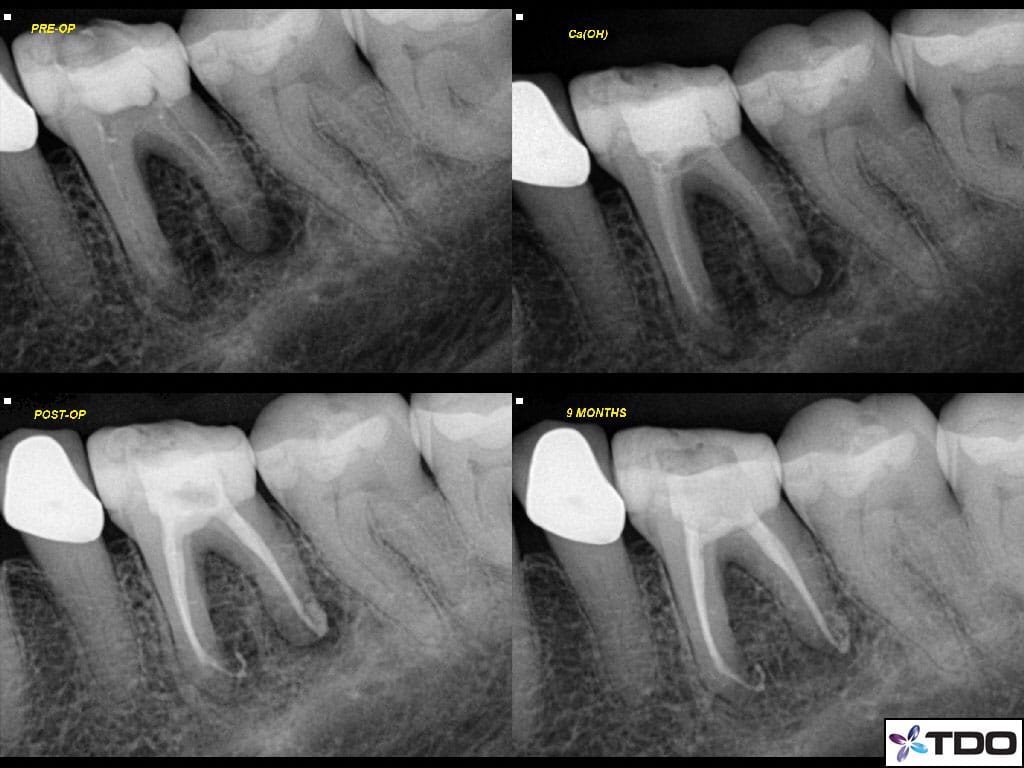 Disinfection:
1. Laser disinfection with Er,Cr:YSGG laser (Waterlase iPlus, Biolase, Irvine, CA) using RFT2 and RFT3 laser tips with settings of 1.00 Watt, H mode, 20 Hz (PPS), 10% air, 0% water, 50 mJ/pulse.
2. Deep dentin disinfection with 940 nm diode laser (Epic X, Biolase, Irvine, CA), with an uninitiated laser tip, using settings of 1 Watt, continuous wave, in a wet canal. This is an off-label use of the diode in the USA as no FDA clearance has been issued for this application.

Ideally, for both cleansing and disinfection, the laser tip is placed 1 mm short of working length and activated on withdrawal of the tip, in a circular motion, at a rate of 1-2 mm per second. This process is repeated four times in each canal. Placement of the laser tip is influenced by root canal anatomy, diameter and flare of the prepared canal and presence or absence of canal patency; it will remain effective even at distances of 5 mm or more from the apical foramen.

Erbium Lasers in Endodontics
Erbium lasers have emerged as the most promising laser wavelength in endodontics. They are both hard and soft tissue capable and have the most FDA clearances for a multitude of dental procedures. Their primary chromophore is water and to a lesser degree, hydroxyapatite. Photo-thermal interactions prevail in soft tissue and photo-disruptive in hard tissue procedures. When proper parameters are followed, thermal relaxation is excellent with minimal collateral thermal damage in surrounding tissues.

Action in Root Canal Systems
When activated in the presence of water, instantaneous vaporization occurs, creating a vapor bubble at the end of the radially-ﬁring laser tip (Fig. 8). The rapidly expanding and imploding bubbles create a cavitation effect with high velocity water jets forming shear stress along the canal wall. Secondary cavitation effects from canal irregularities also contribute to the cleaning and sterilization potential of the treatment.

At liquid-solid boundaries (canal walls) microscopic bubbles are generated by the shear forces from the passing acoustic wave resulting in a micro-streaming and micro-cavitation effect that can permeate canal ramiﬁcations and dentinal tubules (Fig. 9). Expansion and collapse of intra-tubular water is possible at a depth of 1,000 microns or more, capable of producing acoustic effects strong enough to disrupt bioﬁlm and kill bacteria. 18 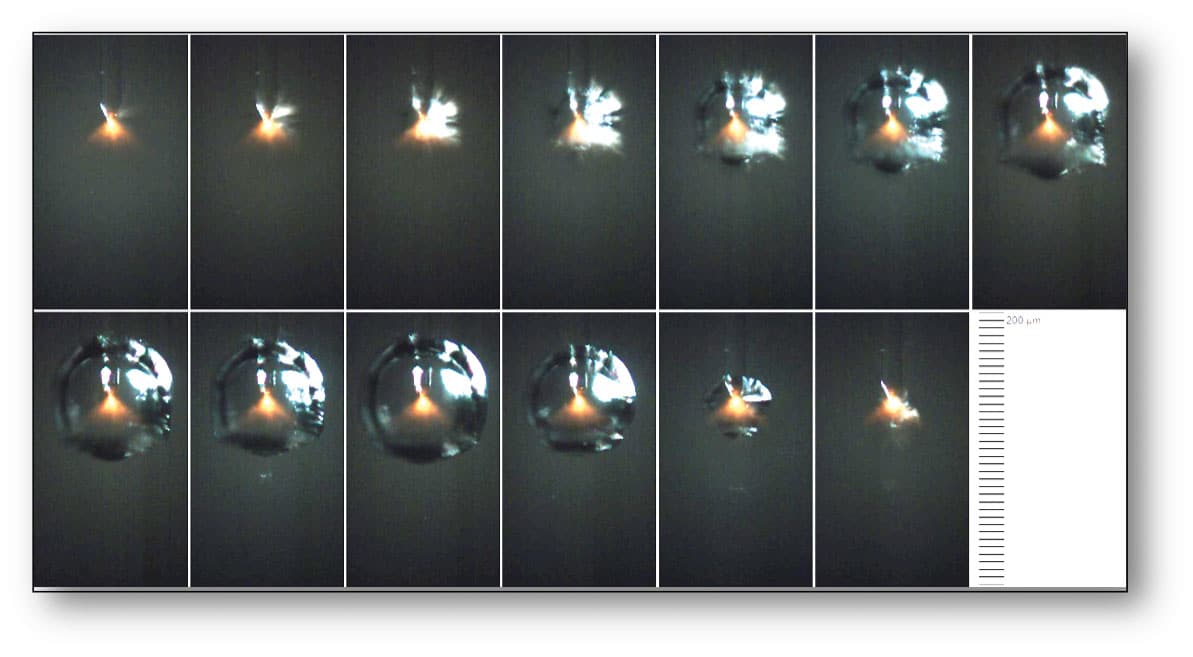 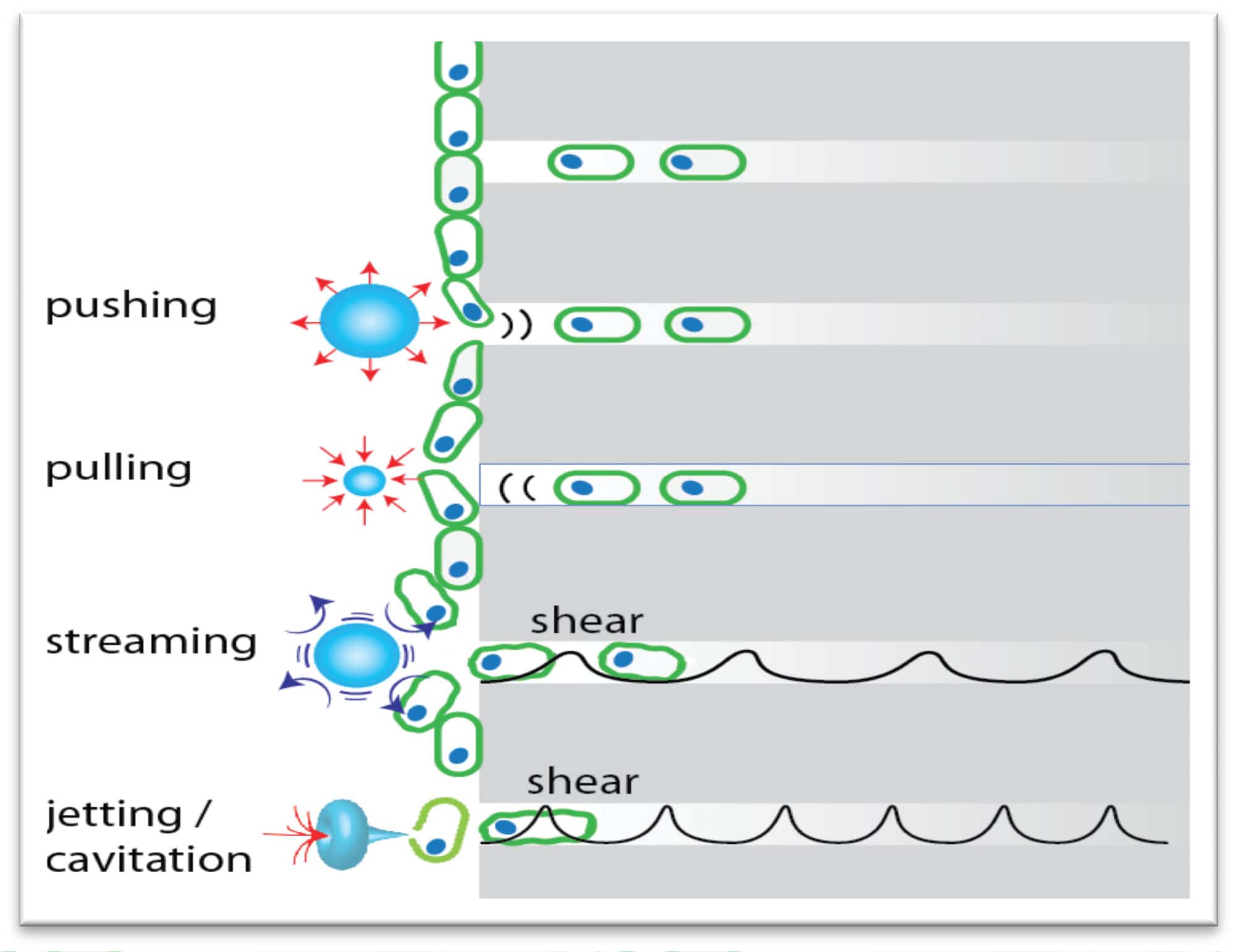 Discussion
Endodontic disease is essentially a bioﬁlm-mediated disease and the success of endodontic therapy depends to a large extent on the ability to remove bioﬁlm and to kill bioﬁlm bacteria.
To achieve this end, endodontic therapy has relied on a chemo-mechanical debridement of the root canal system. Due to the complexity of root canal anatomy, about 30-45% of the root canal system remains untouched by mechanical instrumentation1 and over-instrumentation will further weaken the tooth and may influence apical crack initiation. 2 As a result, more reliance has been placed on the efﬁcacy of disinfecting agents for the killing of bioﬁlm bacteria as opposed to planktonic bacteria. Bioﬁlm bacteria can be up to 1,000 times more resistant to antibacterial agents than their planktonic counterparts. 3

Previous studies have shown that instrumentation and antibacterial irrigation with NaOCl eliminated bacteria in 50–75% of the infected root canals at the end of the ﬁrst treatment session, whereas the remaining root canals contained recoverable bacteria. 4,5 In their study, Nair et al. showed that 88% of root canal–treated mandibular molars showed residual infection of mesial roots after instrumentation, irrigation with NaOCl, and obturation in a one-visit treatment. 6 For antimicrobial agents to be effective, they need to reach the canal terminus, carry undissolved particles away, create a current and continuously replenish themselves. Chow illustrated that there is little flushing effect beyond the tip of a side-vented needle. 7 In addition, the dissolving action of sodium hypochlorite on intra-canal tissue releases bubbles that can coalesce to form apical vapor lock that promotes poor apical cleaning by preventing irrigants from reaching the canal terminus. Apical negative pressure irrigation has been shown to be extremely effective in overcoming these obstacles8 but is becoming increasingly more difﬁcult to use with the smaller canal shapes being advocated with minimally invasive endodontic principles.

Laser Activated Irrigation (LAI) generates stress waves strong enough to disrupt bioﬁlm, thereby releasing bacteria into their planktonic state. 9,10 This may occur either due to cohesive failure, disrupting superﬁcial layers, or adhesive failure, completely removing the bioﬁlm. This makes the bacteria more susceptible to the biocides (intra-canal irrigants and medicaments) used for canal disinfection. There is also a reported direct effect on the bacteria themselves, increasing bacterial permeability by creating temporary pores in their membranes and damaging cell surfaces. 11,12 If the shear forces generated are insufﬁcient to break down the cohesive bonds of the viscoelastic bioﬁlm matrix, the bioﬁlm will simply deform and return to its original state. 9 Insufﬁcient forces may be generated with the use of sonic or ultrasonic agitation or if the laser tip placement is too distant from the bioﬁlm. LAI has also been shown to effectively remove smear layer 13 and dentinal plugs, 14 thereby playing an important role in maintaining and re-establishing canal patency. Removal of apical vapor lock is another advantage of LAI and occurs by disruption of the surface tension at the solution-air interface. 15,16

Laser disinfection is an important element of RAC and occurs with the application of the Er,Cr:YSGG laser in the dry mode.The laser energy seeks out the water in infected tissue, the highly hydrated bioﬁlm matrix as well as the bacteria themselves, resulting in ablation of the targeted tissues and microorganisms.The end result is an effective disinfection to a depth of 200 microns into dentin. 17,18 Deeper dentin disinfection has been reported with the diode laser 19,20 and the dual laser approach has been showing promise in vitro. 21,22 The primary chromophore for the diode laser wavelength is pigment (melanin and hemoglobin) and to a lesser degree, water. This results in greater light penetration through dentin with little interaction with it, making it possible to seek out and destroy microorganisms deeper in the dentinal tubules.

Conclusion
The challenge presented by refractory endodontic disease can be summed up by Ricucci 23: “(We need) to develop strategies, instruments or substances that can reach those areas distant from the main root canal to achieve sufﬁcient reduction in the infectious bioburden to permit predictable periradicular healing”.

A treatment protocol, Radial Apical Cleansing, (RAC) is presented for non-surgical management of refractory endodontic disease. The protocol relies primarily on a synergistic effect between Er,Cr:YSGG laser irradiation and subsequent apical negative pressure irrigation with 6% sodium hypochlorite, that promotes disruption and destruction of bioﬁlm bacteria within complex root canal systems and dentinal tubules. While several studies have focused on identifying root canal microflora in recalcitrant cases in an attempt to explain the pathogenesis of refractory disease, it is the contention of this author that RAC is a valuable tool capable of successfully treating the infectious bioburden, irrespective of the makeup of the bioﬁlm itself. In the two case reports presented, the only signiﬁcant deviation from standard endodontic protocols was the introduction of laser-assisted, endodontic cleaning and disinfection. OH

For the past 36 years, Dr. Kolnick has been in private practice, limited to endodontics, in Westchester County, New York. He received his dental training in South Africa and specialized in endodontics at Columbia University in the City of New York. He lectures extensively on endodontics on a local, national and international level. Dr. Kolnick is a Clinical Mentor for Biolase, Inc.