The transcrestal or transalveolar sinus lift procedure was described by Summers in 19941 as an alternative to the “traditional” approach, using the lateral window to reduce the morbidity of the technique. As initially described, the procedure consisted of an approach from the alveolar ridge using progressive caliber osteotomes that are activated using a hammer that impacts them while making a hole that is used to elevate the Schneider’s membrane and the subsequent placement of the dental implant.1 The crestal elevation technique is nowadays widely used among the therapeutic options for the treatment of the atrophic maxilla and is indicated when there is at least 5 mm of residual bone height,2-4 although recently there are publications that reveal that this technique can also be predictable in situations where the bone volume is below 5 mm.5

The main disadvantage of this technique is to achieve the primary stability of the implant, especially if these implants are short or extra-short and the residual bone volume is scarce, so that only a part of the implant will achieve this stability.6-7 Similarly, the use of osteotomes in areas of implant insertion (described in the primary technique) with a hammer to place them, generates stress and unpleasant shocks in patients during surgery, while increasing the chances of perforation of the Schneider’s membrane since the sinus cortices are usually at different heights. Therefore, the front cutting drill is a better alternative for the approach through the bone crest than conventional osteotomes. With this drill the bone located at different heights can be removed without affecting the membrane, as shown in Figures 1-2, and the implant can then be placed in such a way that the flat apex of the implant ends up displacing the rest of the bone volume. 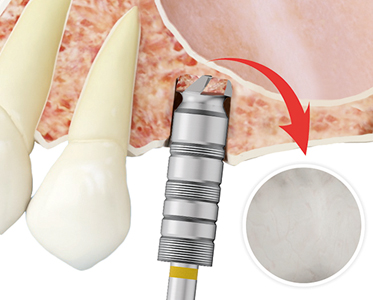 Preparation of the implant insertion site by performing a crestal elevation with the front cutting drill. 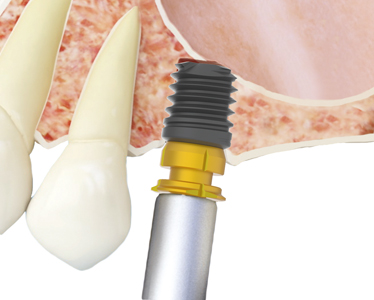 Preparation of the implant insertion site by performing a crestal elevation with the front cutting drill.

The following factors influence the achievement of primary stability in general and in these cases in particular: geometry, length and macro-design of the implant, drilling pattern and bone density.8-10 All parameters except bone density can be modified during the implant insertion surgery, to play in our favor and thus achieve greater primary stability in cases where the bone does not offer correct stability by itself. The implant to be used, its diameter and sometimes its length, can be modified, as well as adjusting the drilling sequence to achieve compression. Therefore, planning the case and knowing the bone density we are facing when performing our dental implant surgeries is vital.10 The achievement of primary stability in cases in which we perform a transcrestal elevation with short and/or extra-short implants and the bone density is very low, generally involves bicorticalization of the vestibulo-palatal and mesio-distal implants. For this purpose, large diameter implants are used rather than longer ones, since the implant section placed inside the sinus in transcrestal lift will not provide any gain in either insertion torque or load distribution.9-10 The present work retrospectively reviews a series of cases in which a transcrestal sinus lift and insertion of extra short implants was performed in posterior maxillary areas with extreme vertical resorption and low density (bone type IV-V) that are placed with a low torque due to the characteristics of the recipient bone bed.

Data were collected for subsequent statistical analysis, the main study variables being bone height gain and implant survival. All patients were studied prior to implant insertion by means of diagnostic models, intraoral exploration, and dental CT (Cone-beam) subsequently analyzed by means of specific software (BTI-Scan II). Before implant placement, antibiotic pre-medication consisting of amoxicillin 2g orally one hour before surgery and paracetamol 1g orally (as analgesic) was used. Subsequently, the patients continued with a treatment of amoxicillin 500-750 mg orally every 8 hours (according to weight) for 5 days.

The implants were placed by the same surgeon, using the biological drilling technique, at low revolutions, without irrigation.11-12 The final drilling of the sinus floor was performed with the frontal cutting drill (designed for this technique), which allows the removal of the sinus floor without damaging the Schneider’s membrane.13-14 Once the membrane is accessible through the crestal perforation, it is detached and the implant is inserted with the surgical motor set at 25 Ncm and 25 rpm, completing the placement of the implant with the torque wrench. The drilling is adjusted to achieve a correct primary stability according to the density of the area and the residual bone volume. The implant slowly elevates the membrane while being inserted in the neo-alveolus, in the case of a minimum elevation of 1-1.5 mm total or partial.

Patients undergo control panoramic radiographs every 6 months, and the required measurements are taken on these radiographs to check the stability and crestal bone loss of the implants. Once the X-ray is downloaded in digital format, it is calibrated by means of a specific software (Sidexis measure) through a known length in the X-ray, such as the dental implant. Once the calibration measurement is introduced, the software performs a calculation based on this measurement to eliminate the magnification, being able to perform linear measurements exempt from this error.

The implant was the unit of analysis for descriptive statistics in terms of location, implant dimensions, and radiographic measurements. The patient was the unit of measurement for the analysis of age, sex, and medical history. The primary variable was implant survival, and mesial and distal bone loss and final bone crest height achieved after implant insertion and loading were recorded as secondary variables. A Shapiro-Wilk test was performed on the data obtained to confirm the normal distribution of the sample.

Ten patients were recruited, and ten implants were placed in areas of the posterior maxilla with vertical and low atrophy (bone type IV [500-400 Hu] and bone type V [350-100 Hu])10. Six of the ten patients were women with a mean age of 69 (+/- 3.1 years). Five of the ten patients had arterial hypertension receiving pharmacological treatment and one patient was diabetic. None of the patients were smokers. The inserted implants were 5.5 mm long in 20% of the cases, 6.5 mm long in 70% of the cases and 7.5 mm long in 10% of the cases. In relation to the diameter, six of the implants were 5.5 mm (60%), three of them were 6.25 mm (30%) and one implant was 5 mm (10%). Sixty percent of the implants were inserted in type IV bone and the other 40% in type V bone. The mean height of the residual bone volume was 4.0 mm (+/- 0.4 mm with a range of 3.2-4.4 mm). A transcrestal sinus lift was performed in all cases, with the mean sinus lift in millimeters being 2.3 mm (+/- 0.6 range 1.45-3.3 mm). All transcrestal sinus elevations were performed without any graft material or with fibrin only. The positions of the implants inserted in the study are shown in Figure 3. 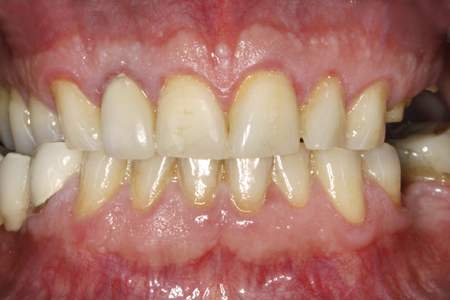 Initial images of the patient showing a failed prosthesis in the second quadrant that requires the insertion of implants for its rehabilitation, as well as the extraction of root debris.

Images 3 to 11 show one of the cases included in the study. 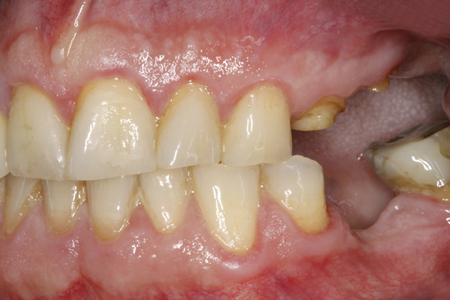 Initial images of the patient showing a failed prosthesis in the second quadrant that requires the insertion of implants for its rehabilitation, as well as the extraction of root debris. 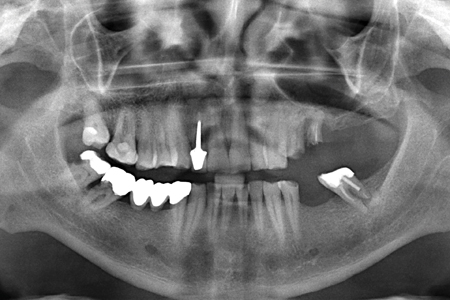 Initial X-ray with the radicular debris of the failed prosthesis. The low residual bone height is already evident.

Images of the planning Cone-beam after extractions and regeneration with PRGF. The low residual bone height and low density can be observed. 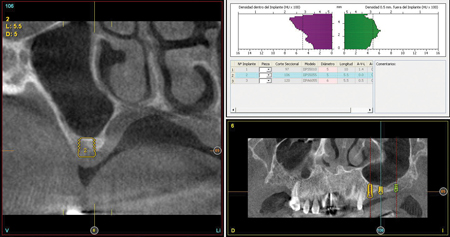 Images of the planning Cone-beam after extractions and regeneration with PRGF. The low residual bone height and low density can be observed. 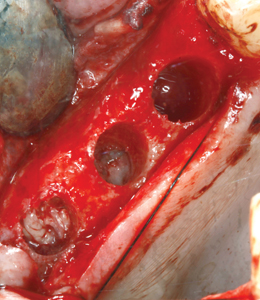 Image of the implant surgery where the transcrestal elevation
can be observed before placing the implants with fibrin as the only filling material. 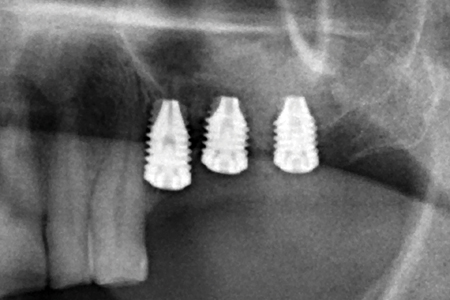 Image after placement of the dental implants and area of the visible crestal elevation, where the fibrin has been placed. 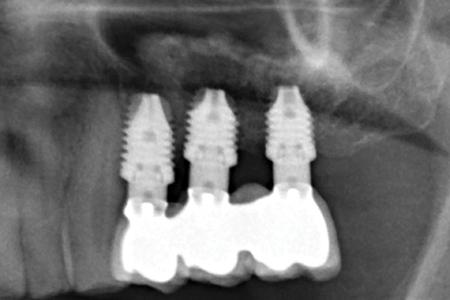 Image after placement of the definitive prosthesis and the area corresponding to the crestal elevation with new bone formation. 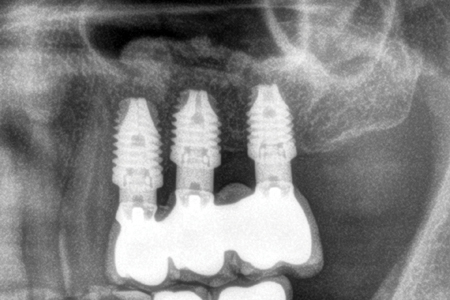 X-ray after 10 years of follow-up.

The main challenge when rehabilitating atrophic posterior maxillae with low density is the achievement of sufficient primary stability for the correct osseointegration of the implants, especially when the implants used are extra-short.6,11-14 Due to this need to achieve primary stability, it is of vital importance to use an adequate drilling sequence according to the bone quality of the receptor bed and the morphology of the implant to be inserted.10-13 If the desired stability is achieved, regardless of the low torque, the treatment can be successful if the implant insertion is performed conservatively without damaging the bone bed. Systematic reviews and prospective studies concerning the insertion torque of dental implants at different torques do not find statistically significant differences between high and low insertion torques on implant survival or crestal bone loss.15-18 The adequate anchorage achieved despite the low torque reported in the studied implants may be due to the drilling protocol, which includes a new frontal cutting drill that prevents perforation of the membrane, and to the biological drilling at low rpm that ensures total control of drill movement in very resorbed ridges, with low bone density and of high risk as those in this study.

Sinus lift either by transcrestal or lateral approach without the use of filling materials is nowadays a proven technique with implant survival rates of 97.9%.19-20 In our case, despite being a small series, survival is 100%.

In the different studies that use transcrestal approaches, there are different techniques with different implants (surfaces, morphologies) and different drilling methods. This may be, in our opinion, the difference between some survival data and others, or even the poor results in ridges with residual bone volume that recommend not to perform this procedure in these extreme cases.

In the studied cases, the lack of density and the low insertion torque was not a risk factor for crestal bone loss or for implant survival, using only autologous fibrin embedded in PRGF-Endoret as filling material in the mild elevations that were performed (1-1.5 mm). 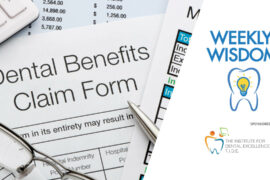