The American Academy of Periodontology (AAP) issued seven special recognitions to members for their contributions to the periodontics. The awardees were honored at a ceremony that took place during the AAP’s 102nd Annual Meeting, held Sept. 10-13 in San Diego.

“The Academy is happy to recognize members whose contributions have helped to strengthen the study and practice of periodontics,” said Dr. Wayne A. Aldredge, the Academy’s outgoing president. “These individuals have used their gifts to exemplify the AAP’s core values of education, advocacy, innovation, and commitment.”

Master Clinician Award
Dr. Stuart J. Froum is the recipient of the Master Clinician Award, which is bestowed annually to a member who has demonstrated consistent clinical excellence in periodontology and who continually shares that clinical experience with others. In addition to maintaining his New York City practice for 35 years, Dr. Froum is a respected educator who has served as Clinical Professor and Director of Clinical Research at New York University’s Department of Periodontology and Implant Dentistry since 1990. He is a past president of the AAP and the Northeast Society of Periodontics as well as a former AAP district trustee, member of the Continuing Education Committee, and board liaison to the Academy’s Continuing Education and Oversight Committee. Along with his roles as a reviewer for the Journal of Periodontology, International Journal of Periodontics and Restorative Dentistry, and the Compendium of Continuing Education in Dentistry, Dr. Froum has penned more than 100 articles in peer-reviewed journals. The Master Clinician Award is sponsored by Hu-Friedy.

Distinguished Service Award
For his continued service to the Academy and unwavering commitment to the specialty of periodontics, the AAP presents Dr. Jack G. Caton, researcher, educator, and clinician, with the 2016 Distinguished Service Award. A past president of both the Academy and the AAP Foundation, Dr. Caton currently presides as the co-chair of the 2017 World Workshop on the Classification of Periodontal and Peri-Implant Diseases. A former associate editor of the Journal of Periodontology, Dr. Caton has also held a position on the American Dental Association’s Commission on Dental Accreditation, which develops and administers the standards of dental training programs across the country. Additionally, his extensive research has been published in more than 110 scientific articles and book chapters. Dr. Caton is a professor at the University of Rochester’s Department of Dentistry, and he maintains a periodontics practice in Rochester, N.Y.

Distinguished Scientist Award
The Distinguished Scientist Award is presented to an Academy member who has contributed to the basic and clinical science of periodontology through published literature and education. Dr. Martha J. Somerman, director of the National Institute of Dental and Craniofacial Research (NIDCR), is the 2016 AAP Distinguished Scientist honoree. For more than 35 years, Dr. Somerman’s contributions to research and learning have driven the advancement of periodontal care, specifically in the areas of periodontal regeneration. Prior to entering her leadership role at the NIDCR—the nation’s top supporter of dental, oral, and craniofacial research—in 2011, Dr. Somerman was the dean of the University of Washington School of Dentistry.
In addition to serving as chief investigator at the National Institute of Health’s (NIH’s) Laboratory of Oral Connective Tissue Biology, she is a Senior Advisor at the NIH Clinical Center, where she plays a key role in setting the vision for clinical research programs related to the dental, oral, and craniofacial complex. Dr. Somerman’s work has been published in more than 190 peer-reviewed and non-peer-reviewed journals, 17 book chapters, and three books. The Distinguished Scientist Award is sponsored by OraPharma.

Outstanding Periodontal Educator Award
This year’s recipient is Dr. Thomas C. Waldrop, tenured professor and director of postdoctoral periodontics at Virginia Commonwealth University’s (VCU’s) School of Dentistry. The Virginia native is a retired U.S. Air Force Colonel who has served as a director and chairman for a number of residency and research programs, most notably at Lackland Air Force Base in San Antonio, Texas. He has previously held roles as director and chairman of the American Board of Periodontology, a periodontics consultant to the American Dental Association’s Commission on Dental Accreditation, a member of the Review Committee on Periodontal Education, and a member of the AAP’s In-Service Examination Committee. Throughout his career, Dr. Waldrop has trained more than 100 periodontal residents, directed over 20 resident masters’ theses, and supervised 34 theses. The Outstanding Periodontal Educator Award is sponsored by Hu-Friedy.

William J. Gies Award
Dr. Michael S. Reddy is the 2016 recipient of the William J. Gies Periodontology Award. Presented by the American Dental Education Association’s William J. Gies Foundation for the Advancement of Dentistry, this award is conferred to those who have made outstanding contributions to the field of periodontology. Dr. Reddy, currently the dean of the University of Alabama at Birmingham (UAB) School of Dentistry, has spent his career as a clinician and educator. Since 1989, he has been a staff clinician at both the Children’s Hospital of Alabama and at the UAB’s faculty practice. As a senior scientist at the UAB Center for Metabolic Bone Disease and the UAB Center for Aging, Dr. Reddy is a renowned researcher whose studies have focused on regenerative medicine as well as links between overall health and oral inflammation. He is also the associate editor of the Journal of Periodontology and has previously served on the editorial boards of the Journal of the American Dental Association and Journal of Dental Education. He has held roles as a reviewer for such publications as the Journal of Dental Research and International Journal of Periodontics and Restorative Dentistry. In addition to service on a number of UAB School of Dentistry committees, Dr. Reddy has long been an active volunteer in organized dentistry, with service on the AAP’s Leadership Development and Qualifications Committee and its Task Force on Future Science. He is a past chair of the Academy’s Scientific Oversight Committee.

Clinical Research Award
This award is presented to an outstanding recently published scientific article with direct clinical relevance in periodontics. The 2016 recipients of this award, authors of “Update on the Prevalence of Periodontitis in Adults: NHANES 2009 to 2012,” which was published in the May 2015 edition of the Journal of Periodontology, are as follows: Paul I. Eke, Bruce A. Dye, Liang Wei, Gary D. Slade, Gina O. Thornton-Evans, Wenche S. Borgnakke, George W. Taylor, Roy C. Page, James D. Beck, and Robert J. Genco. The Clinical Research Award is sponsored by Quintessence Publishing. 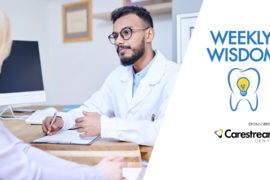