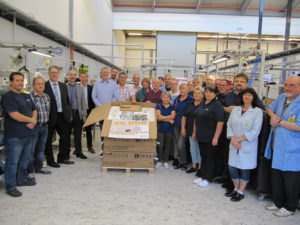 Dentsply Sirona Imaging reached a special milestone in September: The 40,000th X-ray tube assembly of the current Heliodent Plus model was shipped. The flexible, intuitively operable system with superior image quality is in great demand all over the world.

The Heliodent Plus X-ray tube assembly from Dentsply Sirona Imaging has a long history. In 1934, Siemens-Reiniger-Werke (SRW) brought the famous “Röntgenkugel” X-ray sphere onto the market and at the time it was the smallest X-ray device in the world. The X-ray beam was focused with pinpoint accuracy on the area for examination by a cone-shaped tube assembly. In 1955, SRW introduced the HELIODENT intraoral X-ray machine. Along with the name, the basic principle of the emitter has remained almost completely unchanged until the present day. From 1978 onwards, Siemens produced the machine at the Bensheim site and since then, more than 180,000 intraoral X-ray devices have left the factory. The great international demand, particularly from North America, Europe and Asia, further increased when the current model, the Heliodent Plus, was unveiled for the expert community at IDS 2009. In September 2016, the 40,000th X-ray tube assembly was delivered.

“The numbers speak for themselves. We are delighted that the demand among our customers in the intraoral sector for our high-quality products continues to grow. Heliodent Plus is probably the best intraoral DC X-ray system in the world. It is the culmination of our many decades of experience hand-in-hand with the technical expertise of the innovation leader. For this reason, we have succeeded in substantially raising the number of units sold consistently in the last few years,” said Head of Imaging Systems Product Management Jörg Haist. X-ray images produced with Heliodent Plus satisfy requirements to provide the best possible diagnosis for many applications, e.g., caries diagnosis, endodontics and after-care for implants.

Flexible and intuitive operation
With three different support arm lengths available, the many installation options for mounting on the wall, the ceiling or the treatment center, the Heliodent Plus can be adjusted to the existing conditions in your practice. If the workflow in the practice requires a mobile solution, one viable option is an X-ray tube assembly with a mobile stand. The option to produce both analog and digital X-rays thus enabling fast, easy switching from film to imaging plates or sensors is yet another advantage of the Heliodent Plus. The thoroughly considered user interface with operating status display in various colors completes the sophisticated system design and ensures fast, easy operation.