American Dental Association President-Elect Has Been Chosen for 2017 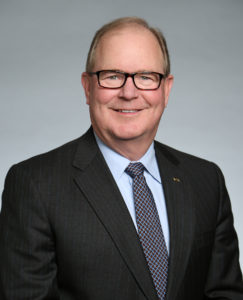 Joseph P. Crowley, D.D.S., a general dentist practicing in Cincinnati, Ohio, is the new president-elect of the American Dental Association (ADA). Dr. Crowley was recently elected during a meeting of the ADA House of Delegates in Denver, Colorado. He will assume the role of president of the ADA in October 2017, when he will lead the 159,000-member organization that is America’s leading advocate for oral health.

Since 2012, Dr. Crowley has served as the Seventh District trustee to the ADA House of Delegates. Dr. Crowley has served the profession in a number of ways during his four decades as an ADA member, including as chair of the Council on Government Affairs in 2008-2009. He is also active in the Ohio Dental Association, and served as its president in 2005-2006. Dr. Crowley was the president of the Cincinnati Dental Society in 1996.

After finishing dental school at The Ohio State University College of Dentistry in 1976, Dr. Crowley returned to his hometown of Cincinnati, where he has practiced general dentistry for the past 40 years. He’s been involved in the community, and has been particularly active at LaSalle High School, his alma mater. He was named to the school’s athletic hall of fame in 2009.

About the American Dental Association
The not-for-profit ADA is the nation’s largest dental association, representing more than 159,000 dentist members. The premier source of oral health information, the ADA has advocated for the public’s health and promoted the art and science of dentistry since 1859. The ADA’s state-of-the-art research facilities develop and test dental products and materials that have advanced the practice of dentistry and made the patient experience more positive. The ADA Seal of Acceptance long has been a valuable and respected guide to consumer dental care products. The monthly The Journal of the American Dental Association (JADA) is the ADA’s flagship publication and the best-read scientific journal in dentistry. For more information about the ADA, visit ada.org. For more information on oral health, including prevention, care and treatment of dental disease, visit the ADA’s consumer website MouthHealthy.org.