Chief Complaint
Boris (not his real name) is a young man in his early twenties who presented with constant uncontrollable and embarrassing masticatory and cervical muscle movement disorders.

History
Boris is a 22-year-old male who resides with his family in Northern Maine (not his real location) and originally presented to our office in September of 2013. He is a recent graduate of a top business school and is heading to work in New York City for a prestigious firm on Wall Street. He explained that he could not be seen by coworkers twitching as badly as he had been. His episodes with movement disorders, specifically tics of the head and neck region, had been going on since he was a young child and had become progressively worse over time. He reported that he has had eye blinking and facial and neck tics for many years, but they had become worse in the past two to three years. He reported a severe concussion in May of 2013 due to a rugby accident. During college, Boris was prescribed Topomax for his chronic headaches (bilateral) and eye pain. He reported that it “just made me feel dopey”. When asked what made his condition worse, he reported “caffeine”.

The left sphenoid, left mastoid, and left occiput were all elevated when compared to the bones on the other side of his head.

Based on this clinical evidence, Boris was sent to a local MRI center for left and right TMJ images done in sagittal and coronal views.

Diagnostic Work Up
It should be noted that Boris had an MRI of the brain in May of 2013, just after his reported concussion. It demonstrated no abnormalities and no hydrocephalus, no midline shift, and no apparent mass defect.

Boris had an MRI done of the TM joints in September of 2013 based on the exam done at our office. It showed an absence of any internal derangement in either joint. Mild medial or lateral displacement could not be ruled out. The MRI was essentially negative which conflicted with our clinical examination.

Treatment Objectives
In any patient with a compromised TMJ disorder(s), it is imperative that the tissues of the joints be allowed to ‘decompress’ and heal for some length of time to determine if the discs might go back into position without surgical intervention. The plan was to place a mandibular Gelb appliance to achieve this goal, measure vertical opening every six to eight weeks to see if the joints would decompress and the joint tissues heal, and then take a new MRI six to 12 months later to determine if the discs had been restored back into their normal anatomical positions.

Progression of Treatment
After eight months in the Gelb appliance, Boris was able to open to 60 mm with ease and the headaches were gone and most of the tics had dissipated, although not completely. At that time, we ordered a new MRI. This new MRI showed normal range of motion (mild medial displacement could not be ruled out, however) At this time, the parents and Boris were concerned that his tics were still present, although mostly abated, and they were not completely happy with the outcome. Boris was now wearing a medicated skin patch provided by his neurologist which was designed to relax and sedate the urge to tic. Still, his movement disorders were not completely resolved.

After many discussions with both parents and Boris, it was decided that elective TMJ plication surgery would be the next logical step. The parents and Boris were thoroughly informed and understood that neither our office nor the surgeon could in good faith state this surgery was absolutely needed, nor would it be guaranteed to relieve any symptoms at all. It should be noted that an MRI, while being the finest technology there is available today, is only 74 percent accurate if the findings are negative, and 92-94 percent accurate when the findings are positive. Please keep in mind that false negatives and false positives do exist in clinical practice. This is where our professional judgment comes in.

The appliance was converted to a surgical splint in preparation for surgery. Boris had the plication surgery done in early 2014. It was during the surgery that the surgeon noted, upon visual exam, that both discs were 30 percent anteriorly displaced out of the glenoid fossa, with the left disc also being somewhat medially displaced and the right disc being significantly medially displaced. It is the surgeon’s eyeball, not the MRI report, which is the ‘Gold Standard’.

A couple weeks post surgery, Boris reported “I’ve been doing very well” and 85-90 percent of the tics and their urges were gone. There was still some tenderness and soreness, but he reported that everything felt very good. As of June 2014, the tics remained “mostly gone” and Boris’ self assessment report showed that headaches, jaw pain, face pain, neck pain, ringing in the ears, muscle fatigue were all absent. Boris had a follow up visit at our office in August 2014 and reported that he felt “great” and there were no tics or headaches to report. He stated he was sleeping better than ever.

Conclusion
It was quite clear in this case that although the MRI is usually relied upon to help determine the course of treatment, it is not 100 percent effective at all times and we must base our recommendations on professional logic, skill, and judgment (i.e. it was clear that Boris benefited from the Gelb which decompressed the tissues of the jaw joints, yet this benefit was not enough to resolve his tics completely, and this was affecting his lifestyle).

Discussion
It is our belief that the Gelb appliance begins the initial reduction of the existing neuritis and inflammation – i.e. the constant irritation and noxious stimulation and input of the auriculotemporal nerve to the CNS – and reduces the urge for the patient to ‘tic’. The Gelb appliance does this by decompressing the joint space and allowing the articular disc to settle back into a more normal, anatomical position. Oftentimes, wearing of the Gelb appliance for most patients works so well that surgery is not indicated.

It is our belief that Boris required surgery because of the extreme trauma he had endured during his rugby career while in college. He reported multiple traumatic incidents in which his head was hit and he fell many times and sustained serious injuries. This is consistent with the displacement and internal derangement of the temporomandibular joints.

It took quite a leap of faith for the authors to eve
n make the suggestion that plication surgery might be indicated, although no other long term viable solutions exist. It is our opinion that this definitive approach was far superior to a lifetime of drug consumption to suppress Boris’ symptoms. There was no other option other than drugs which would not cure the problems. To our knowledge, this approach to working with a Tourette’s patient with an underlying TMJ disorder is a first in the field and deserves further research. It should also be noted that Tourette’s is classified as a movement disorder, similar to Parkinson’s, and all movement disorders are treated in the same fashion at our office – i.e. when they have an underlying TMJ problem, which most of them do, we proceed with decompression of the tissues of the joint space, reducing and eliminating any internal derangement, and then restoring the occlusion as needed.

Dr. Jeffrey Brown is from Maine originally where he went to Bowdoin College and graduated Magna Cum Laude. From there he went early decision into Georgetown Dental School and graduated in 1986. He spent the next twenty years building a large practice with focus on reconstruction and TMJ work. From there he went to business school and acquired an MBA. After a short sabbatical to help raise his four children, he met up once again with Dr. Brendan Stack and formed a partnership that has been in place since 2013. He has taken many advanced training programs in dental sleep medicine, orthodontics, and of course TMJ. Their advanced training in orthodontics makes them especially skilled in using computer designed orthodontic systems to accelerate a patient through their orthodontic treatment. 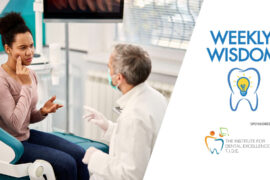 Weekly Wisdom: How to Manage Difficult Situations at Your Practice