Implants and Imaging, The “I’s” of the Future

Dentistry has always been at the wavefront of new technology. Advances in dental care have rapidly been assimilated from inception to reality throughout the history of the profession. From air rotors to x-ray’s, the rapidity of these advances has not slowed.

Dental implants have been an advantage for the general public and profession alike. Integrating the implants into bone has created a stable and useful restorative option that had not previously existed. In the past twenty years the ease of both placement and restoration has changed significantly to allow a consistent level of success in treatment.

The advent of digital radiography has covered a similar path. With the PC revolution at hand, the ability to integrate digital technology with practice management software has made the digital x-ray a welcome addition to the patient chart. Sensors and holders that are smaller and easier to use have increased patient comfort while improved software has made the imaging far superior to that of conventional x-ray film.

The greatest single advantage of digital radiography is time. From the press of the switch until the image appears requires only seconds with digital systems. Film-based imaging requires processing time which can be minutes at best. In a profession that is based upon chair-time, time savings is a crucial element in the daily treatment of patients.

Nowhere does the speed advantage in digital radiography become more evident than in the field of dental implants. From surgical to restorative procedures, the dental x-ray as a tool in implantology is critical. Views of bone topography prior to surgery along with careful inspection of the implant placement are crucial to the long term success of the implant. For the surgeon placing implants, immediate views of the implant are available without any wait for film processing. If these implants were placed in an improper position during surgery, this situation can be realized in seconds and corrective action taken with less trauma and chairtime for the patient. The restorative dentist must rely on correct radiographs to assure the proper seating of the restorative implant fixture as well as the final restorations. Sequential conventional radiographs take time. This would be accomplished in a matter of seconds with digital radiography. In Figure 1 an implant seating sequence is shown. A total of six images were required to assure an adequate fit and seat of the prosthesis while refining the contacts. Conventional radiography would require 36 minutes of developing time for this entire sequence utilizing x-ray film, chemicals and valuable chair time for just one procedure. No more than 18 seconds would be used for the entire sequence with digital radiography. The chairside time saved alone is far greater than chemical or film costs. For the dental office, the time savings would free up the office for more productive procedures. For the patient this translates to faster visits with the benefit of far less radiation exposure.

Communication between both the surgical and restorative dentists becomes a matter of a simple e-mail of the digital image with digital radiography. No longer must x-rays be duplicated and sent to other offices. The digital image can be reproduced by print methods or sent via e-mail between offices to assure the highest quality imaging for each doctor and their patient’s records.

Misconceptions relative to digital radiography have existed for as long as the technology has been in the profession. The concept of exceptional cost over conventional x-rays has been the first complaint. If one examines this closely the argument disappears. The cost factor for digital radiography appears in the initial expense of the sensors and software. This can range from $10,000.00 and upwards depending upon the system. Once established in office, the normal operating cost of a digital system consists of barrier sleeves and sensor holders. Conventional x-ray systems require the upfront cost of a film processor or dark room tank system and monthly costs of x-ray film, holders and processing chemicals. By simple amortization of these costs over a period of time, the digital advantage becomes significant. It is just a matter of cost at the time of purchase versus cost over the life of ownership.

Image quality of digital views compared to x-ray film has been questioned since the inception of the technology. A comparison exists in the consumer world regarding standard 35mm film and digital cameras. The 1.1 megapixel camera of only three years ago compared to 35mm film showed a disadvantage of the digital technology. Today consumers can purchase six megapixel and greater digital cameras with resolution far greater than 35mm film. Professional consumer photography has made a decisive switch to a digital format. Dentistry is mirroring this digital revolution. The newer sensors coupled with greatly improved dental software has allowed imaging capabilities far greater than the best film quality allows. The operator can manipulate the images with imaging software to see the picture from the best diagnostic perspective available.

The relief view shown in Figure 2 is a result of the superior software technology offered with digital radiography packages. No longer is the dental professional constrained by a two dimensional view of a three dimensional object. Proper use and manipulation of software allows images to become multi-dimensional. Color may be added to the image to distinguish and allow far greater clarity than any film can offer as we see in Figure 3.

Correct use of the software allows the operator to see areas that were unavailable to view on x-ray film alone. The ability to highlight the areas of bone density along with proper relationship of the implant to the bone itself led to greater success of implant placement.

In the past, a chief complaint of the patient has been the discomfort caused by both sensors and the devices used to hold them. Sensor design has become more ergonomic and patient friendly in recent years. Sharp corners have given way to round ones, making the sensor more comfortable to the patient. A universal complaint of both patient and doctor has been the lack of adequate holding devices for two distinct reasons: discomfort for the patient and difficulty of use for the operator. The prevalent sensor holders have been adaptations of existing film designs. Rigid holders designed for use with flexible x-ray film had been adapted for use with rigid digital sensors. The result of rigid holders plus rigid sensors caused discomfort to the patient as now the only flexibility was within the patient’s mouth. For doctors utilizing these holders, a myriad of separate pieces translated into significantly more setup and chair time to capture a radiographic image. The time saved over conventional film processing by taking a digital image was now used up with holder setup for taking the very same image.

Recent developments in sensor holding technology has addressed and corrected these complaints. New digital sensor based holding technology such as the ClikRay system (Fig. 4) has been developed specifically for digital radiography to address these concerns.

The ease of use and rapidity in positioning sensors with the ClikRay holder allows the digital speed advantage to its’ fullest potential. Flexibility of the holder and ease of use are the chief virtues of this device. With a flexible holder and a rigid sensor, no longer must the patient feel discomfort from the sensor. The result is a happier patient and a dental office with significant time savings.

Dental radiography is an integral part of every dental practice. Dental implants are becoming involved in all phases of the profession. Digital imaging and implants are a must fit for both the surgical and restorative dentist. To properly maximize the benefits of the dental implant, the digital image should be utilized to the fullest extent. Time and cost savings, less radiation exposure to the patients are obvious advantages. Improved
office communication between surgical and restorative offices help maintain better patient records. The digital radiography revolution is here to stay and there is no better time to embrace the technology than today.

Photos courtesy of Barry Freydberg, DDS and the author.

Harold K. Schmulenson, DDS received his dental degree from Loyola University in 1982. He maintains a full time private practice in Glenview, Illinois. Dr.Schmulenson is a patented inventor and CEO of ClikTech, Inc. a design and development firm located in Buffalo Grove, Illinois, USA. 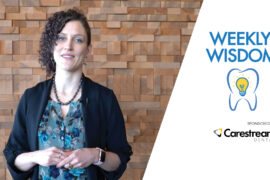