Chances are that you know of someone with Mild Cognitive Impairment (MCI) 1, and/or your practice has some patients at high risk or early signs of this same, dreaded condition.

And chances are you know that these same individuals are entering a decline in their oral health too. Not only because you observe growing inflammation and root caries in their mouths along with limited oral hygiene, but also you also know good quality studies are confirming this consequence of cognitive decline (Chart 1).

This was my circumstance in my independent hygiene practice in Hamilton, Ontario, which serves an older community.

It is also the reason why I am writing this article. I believe there is an effective approach to managing the prospects for poor oral health in older patients starting to experience forgetfulness, memory loss, confusion, and dependency which are common signs of the earliest stages of dementia.

My Surprising Case Studies
Over the past five years, I have been caring for the oral health of two older patients who had, at the start of the treatment plan, obvious MCI.

One patient in his late 80s, was accompanied by his son at the first visit, was confused and was no longer seemingly capable of living independently. This patient’s oral health was poor and he had very limited home care.

The second patient had been diagnosed with MCI, and was enrolled in a university study testing whether diet and lifestyle changes could manage her condition. Again, her oral health was in decline.

The standard of care for patients like these, is to manage the plaque above and below the gum line with a thorough prophylaxis and scaling-root-planing, typically at frequent intervals. But for these patients with a poor oral health prognosis and likely an inability to pursue mechanical debridement over the long term, I also recommended a more aggressive, less invasive, and long-lasting treatment plan featuring Prevora (DIN 02046245). Both patients and their caregivers accepted my recommendation.

The treatment plan has worked impressively. Not only for managing the imbalance (dysbiosis) in the supra and sub-gingival plaque and for improving oral health markedly over many years, but surprisingly, for improving cognitive function, too. The first patient no longer needs to be accompanied by his son but rather takes the bus to my practice and has remained independent for now almost five years. The second patient is no longer enrolled in the university study as she is no longer diagnosed with MCI.

Does Improved Oral Health Also Improve Cognitive Function?
These two case studies are intriguing. They support the growing interest by the scientific community in the “infection theory” of dementia. This theory argues that cognitive decline results from microorganisms or their byproducts entering into the brain to stimulate inflammation or the formation of amyloid plaque and associated nerve tangles.

To the hygiene profession, two microorganisms are particularly relevant to managing cognitive function: Porphyromonas gingivalis and Treponema denticola, both of which originate at the gum line. With regard to P. gingivalis, two very recent, controlled animal studies have shown direct and perhaps indirect connections (e.g. systemic inflammation) between infection levels in the oral cavity and the process of cognitive decline:

For some time, moreover, there has been growing evidence from human studies that periodontal disease raises the risk for cognitive decline. For example, here are some very recent studies:

In this context, my two successful case studies are even more intriguing, particularly as they have improved in their cognitive function and their oral health for at least five years and over several intervening visits to my practice.

But, of course, it’s never ever that simple.

The facts are these are only two patients, and MCI can revert to normal cognition, can remain stable or progress to dementia, and the reasons for this change are unclear. 7 It is also clear that poor oral health is but one factor which can effect memory loss (Chart 2). 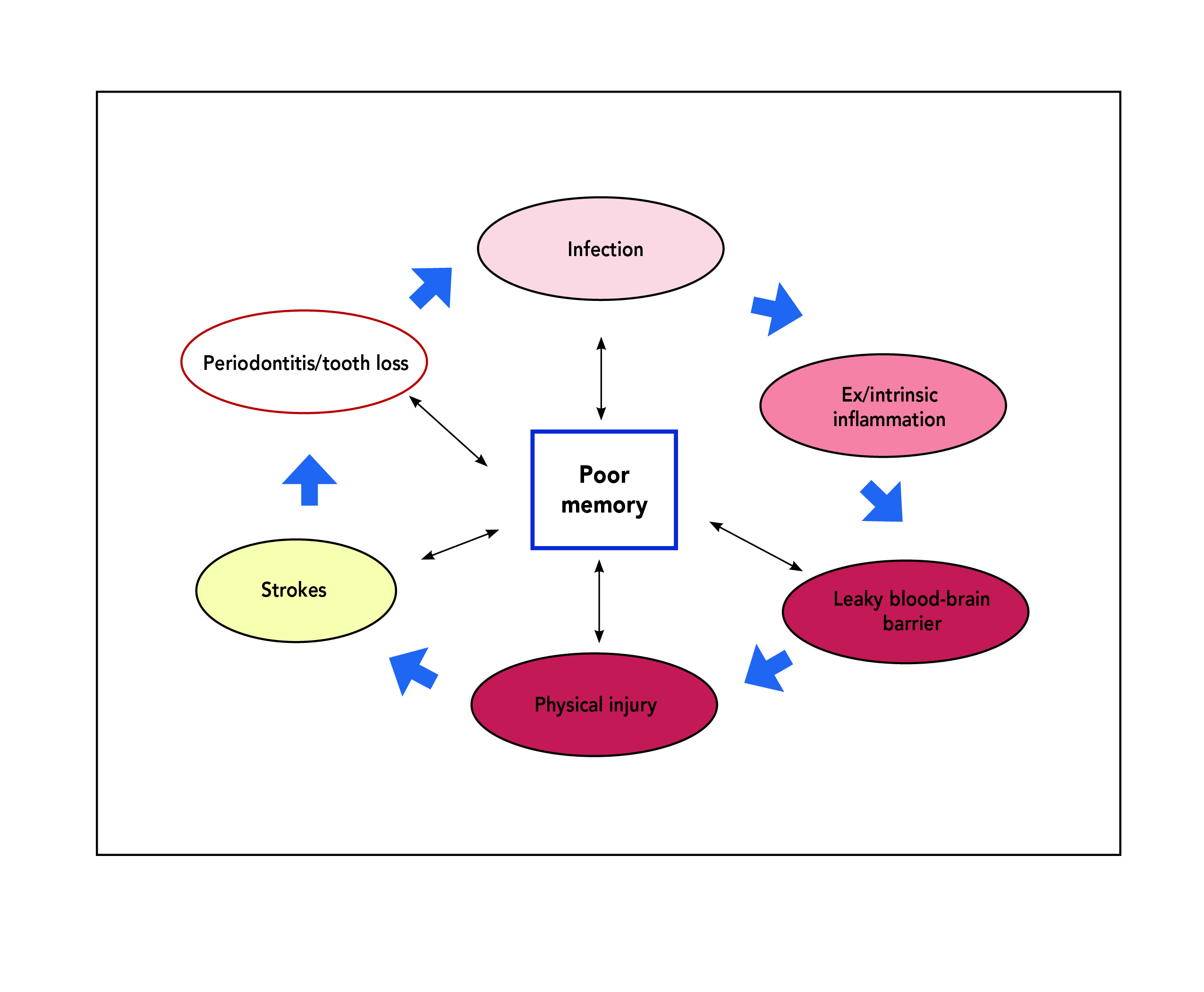 Reservedly, it may well be that my two patients who are most certainly better orally, are better cognitively just by happenstance or, indeed, just when they visit my practice!

Hygiene’s Role in Managing Dementia – It’s More Than What We All Might Think!
So, with this sobering, “reality check” on my encouraging experience with patients experiencing MCI, what do we as hygienists do to deliver healthcare services to this rapidly growing group in our community? Wait until there is conclusive proof from randomized controlled studies showing the bidirectional relationship between poor oral health and cognitive decline is entirely clear and significant? Avoid talking to our patients at high risk of MCI that they need to manage the likely bacterial imbalance in their plaque?

I don’t think ignoring what we now know and are observing about these relationships between poor oral health and cognitive function, is ethical or in the best interests of our patients and their families. So, here is my position.

First, hygienists need to agree that improving oral health at the earliest stages of cognitive decline is a very worthwhile and do-able endpoint on its own. We needn’t get distracted by trying to arrest or improve MCI – a task which has escaped the medical profession to this point in time. Patients with mild cognitive impairment are almost certainly facing poor oral health (Chart 1). And at this early stage of dementia, patients can tolerate hygiene care, particularly Prevora, much better than when they become institutionalized. Timing of preventive oral healthcare is critical. My strategy is to manage oral dysbiosis as best as possible for as long as possible, before the fog sets in.

Second, we all know the prospects for utter confusion can bring on raw emotion and even desperation, particularly as there are now no really effective medical treatments to stop this progressive disease. So, as hygienists, we must be careful to avoid making any claims that better oral health could arrest cognitive decline. Instead, let us focus on what we know and what we do. What we know: oral health becomes a serious problem in cognitive decline. What we do: we manage the underlying cause of poor oral health called dysbiosis, painlessly and affordably. Chances are that the patient and the family will follow your recommendation for preventive oral healthcare now, simply because it is one of the very few, positive steps to respond to with this dreadful prognosis.

Lastly, as hygienists, I dare say we need to up our game. Sure, let’s educate on oral cancer – an acute, life-threatening disease which affects perhaps 10 in 100,000 Canadian adults. But let’s also educate on protecting oral health when MCI sets in. Mild cognitive impairment affects many more Canadians than oral cancer – and is just as scary. About 20% of Canadian seniors have mild cognitive impairment and don’t know what to do about it other than do more puzzles, get more socially involved, go to the gym, and start a Mediterranean diet.8 Hygiene has some proven, and affordable action steps to offer to this community – namely, get your oral health in shape too.

Conclusion
In my independent hygiene practice, older patients are increasingly common and are increasingly vulnerable to poor oral health. They are also at high risk of MCI. Over 5 years, I have concluded I can effectively manage oral dysbiosis in older, high-risk patients. And it seems, by doing so, there can be marked improvements to MCI too. Chances are, my patients want this opportunity.

Julie DiNardo, RDH – Graduated in 1987 and working independently since 2008, Julie has a well established private practice, the Gleam Smile Centre, in Hamilton Ontario. Focusing on the wellbeing of her community, she was the recipient of the Community Service Award in 2016 for her advocacy efforts towards better oral health. Julie is past president of the Business Executives Organization and continues to be on their board of directors. As a founding member of the American Association for Oral Systemic Health, Julie has been able to bring forward the message of better oral health for improved patient care.