Will Apple create the all-iPad classroom?

Apple hopes its foray into digital textbooks for the iPad will impress educators and corner a huge, lucrative K-12 book market. But the high costs of the plan and the challenges of mobile technology could ensure that hardback books remain a classroom mainstay. Will Apple create an all-iPad classroom and realize Steve Jobs’ vision to transform the multibillion-dollar textbook industry? In January, the Cupertino company announced iBook 2, a digital textbook service in partnership with three big publishers that dominate the K-12 market. The electronic books will sell for $14.99. It sounds like an irresistible deal for the dazzling, interactive books that Apple touts. But it would require a huge investment in technology at a time of shriveling school budgets. Teacher training and teacher resistance also pose a challenge. Publishers will issue iBooks for new, not existing, curriculum — but to save money California has suspended adoption of new textbooks until 2015. And then there’s the question of making Facebook and YouTube accessible to every student who’s supposed to be researching Troy or looking up differential equations. Read article

The integration of desktop, laptop, mobile computing through apps, through video and audio streaming (webcasts, webinars, simulcasts, videoconferencing), the soon to be released APPLE TV/PLASMA SCREEN totally integrated and user friendly remote thingamabob, CLOUD and now textbooks highlights a very simple point. Our profession is out of step and out of touch. We rely on antedeluvian mechanisms for education, for continuing education and for professional linkage. If the suits, the powers that bee and the institutions across Canada cut the “crap” and decided that a myriad of unlinked, mismatched and incompatible databases makes sense, then they simply should shut the barn door, the horse has bolted and put up a sign – GONE FISHING. We are an incredibly small populated country, we are an incredibly huge land mass of a country……thanks to a few savants, we are #1 or #2 in the world in terms of broadband capacity. It’s pure and utter insanity to be incompatible in our profession, cost grossly ineffective, expansion and growth and development impossible and at the end of the day, NO ONE BENEFITS except a few executive directors and those who get per diems………..I sound like Sarah Palin after a couple of snorts of pruno!!!!

iTrans – sadly the poll on the blog in terms of a Canadian dental intranet is not being used and the polling is 50/50…..INSANE!!!!  The costs to practice dentistry are skyrocketing, the calibre of dentistry in the explosive environment of new products and equipment is starting to quake, and fundamentals and foundational considerations are starting to falter as market is driving science and service mix…….it’s simply wrong, it needs to be somewhat centralized to ensure that folks can at least talk to one another, become aware, allow the left hand to know what the right hand is doing, mix the team, dentists, laboratory professionals, hygienists, auxiliaries, suit type chumans and enable them to knock it off and keep each other in an endless loop, but noooooooooooooooooo…..same olde same olde and more of it over and over again, deja vuing is getting olde and repetitive.  Where are the voices of reason and sanity who can appreciate that 18K souls in this country are a drop in the bucket and should demonstrate that with this small a cohort, we can be world leaders by example in the dental profession………..COMMENT or NOT – the career you risk is your own…….the times they are a’changin’…….Education should be as the phoenix, the sacred firebird, who at the end of its life builds a nest of cinnamon twigs, which it ignites, and goes to its death amid flames that will bear new life…………a wise consideration for dentistry, metaphorically speaking.

And if you think this is a load of bushwah…….I urge you to READ 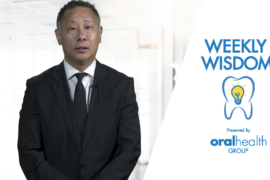