A Rare Complication of a Retrobulbar Hematoma Formation

Following the Extraction of an Impacted Maxillary Wisdom Tooth

The on-call team of Oral and Maxillofacial Surgery was notified to assess and treat a complication of retrobulbar hemorrhage and hematoma following the extraction of a left impacted maxillary wisdom tooth.

This case is unusual as an ophthalmologic complication secondary to a dental extraction is very rare.

Case Report
An otherwise healthy 27-year-old woman presented to the Oral and Maxillofacial Surgery outpatient clinic at the Montreal General Hospital five hours after having had tooth 2.8 extracted by her general dentist. She complained of pain over her left eye, intermittent unilateral blurred vision, and double vision, following the extraction.

Her pre-extraction panoramic radiograph is seen in Figure 1. 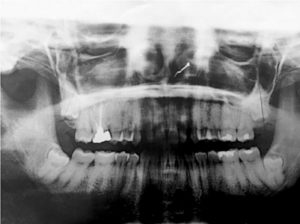 These symptoms began just after the extraction of tooth 2.8, and progressively worsened over the next hours.

The clinical examination revealed swelling of the patient’s left face, left periorbital ecchymosis, left subconjunctival hemorrhage, and significant proptosis of the left orbit (Fig. 2). Her pupils were equal and reactive to light and accommodation. The remainder of the head and neck physical exam was unremarkable. 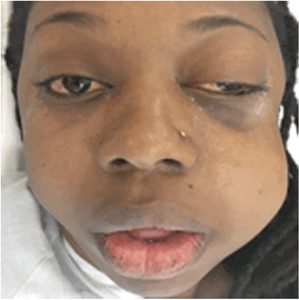 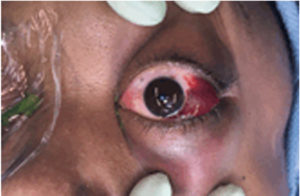 An urgent ophthalmology consultation was summoned and the ophthalmology team performed a comprehensive orbital and eye exam. This confirmed an elevated intraocular pressure (23 mmHg) and exophthalmometry of 29 mm (9 mm proptosis) of the left orbit.

The diagnosis of a retrobulbar hematoma was made and the patient was then taken immediately to the operating room for lateral canthotomy, cantholysis and evacuation of the hematoma under general anesthetic (Fig. 4). Once awake in the recovery room, the patient reported an immediate relief of pressure and pain. The ophthalmology clinical examination performed the day after surgery revealed resolution of visual blurring and binocular diplopia. Over the course of the next two days, the ophthalmology findings returned to normal with complete resolution to normal vision. The patient stayed in hospital for two days for monitoring and has since undergone an uneventful post-operative course.

Fig. 3
Axial and sagittal cuts of the computed tomography scan, showing a 1.3 x 1.3 cm extraconal hematoma of the left orbit. 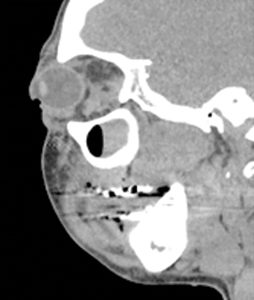 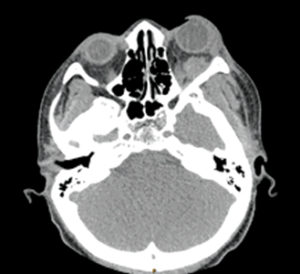 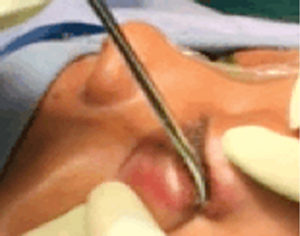 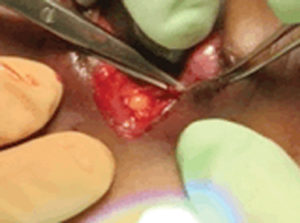 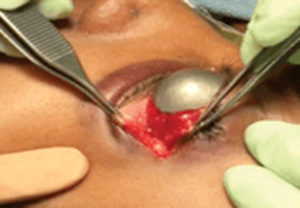 Discussion
To date, there are only two other reported cases in the literature of retrobulbar hematoma secondary to a dental extraction. 1,2

Retrobulbar hemorrhage and hematoma formation is a rare complication that most commonly occurs after facial trauma, facial fracture repair, surgery to the orbit or cranial vault, surgery of the paranasal sinus, or cosmetic surgery.

A retrobulbar hematoma is a medical emergency that requires a prompt diagnosis and urgent care via either surgical decompression (lateral canthotomy and cantholysis) or medical management.

A retrobulbar hematoma requires urgent care because the orbit contains a tight envelope of the globe, orbital muscles, fat, nerves, and vascular structures (Fig. 5). There is minimal space to accommodate any bleeding or swelling into the orbit. 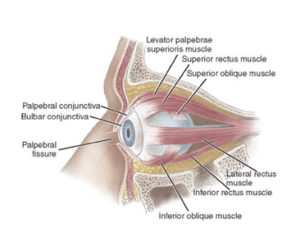 The hematoma will cause a forward displacement of the globe (seen clinically as proptosis) and more significantly, will cause compression of the optic nerve and/or retinal artery that can lead to blindness.

It has been reported that blindness can actually occur within 90 to 120 minutes once compression and ischemia of the optic nerve has occurred. 3

The mechanism of the hemorrhage that caused the retrobulbar hematoma following the extraction of an upper impacted wisdom tooth is not certain but an anatomical pathway seems logical.

One possible mechanism would be that trauma from the dental extraction caused bleeding from the posterior superior alveolar artery, or from the pterygoid plexus of veins into the pterygomaxillary tissue and infratemporal space. From here, the bleeding could continue to tract into the pterygopalatine fossa and then toward orbit via the inferior orbital fissure (Fig. 6). 1,2 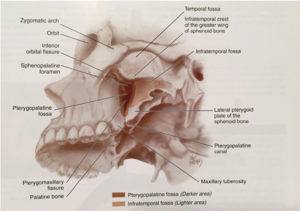 Our case supports the anatomical route mechanism based on the CT findings.

Once a diagnosis has been established, the surgical decompression of the hematoma is done via a lateral canthotomy and cantholysis. This will release the pressure in the orbit.

In the case presented in this report, the patient was managed via prompt investigation and diagnosis, and a surgical decompression of the orbital hematoma (a canthotomy and cantholysis) was carried out with two hours of her presentation to the clinic.

The patient has since been seen on follow up and has normal vision and eye movement with no need for scar revision. OH 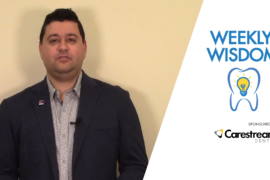